"We Grown Into Courage" - All Saints Church, Worcester, MA. - REVIEW 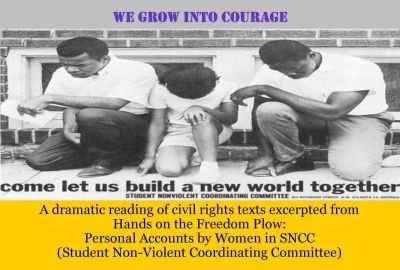 Edited and Produced by Claire Schaeffer-Duffy

All Saint Church will offer the dramatic recitation "We Grow Into Courage" - Voices of Women Leaders of the Civil Rights Moment. The performance is FREE and open to the public.

The cast of seven women offer up important readings of women who were part of the birth of SNCC (pronounced "Snick") which stands for "Student Nonviolent Coordinating Committee" which had its origin during probably the most violent time in the south post-Civil War for civil rights.

It is a multi-media, multi-faceted presentation which included readings, recordings of civil right songs sung in spiritual modality or cadence, live singing, slides, and discussion, with material all coordinated well by Claire Schaeffer-Duffy.

Cast was faced with a daunting lighting challenge as the hall could only light the readers or the video screen used, but apparently not both. So, while the slide presentation on the screen was visible, most of the readers were not.

However, the overall message of the material still was not obscured. On the contrary, it was made quite clear to the audience as the cast discussed a fearless group of women who faced personal and professional struggles, some life threatening, as part of their time with SNCC.

There was an audience Q&A discussion with the cast.

The presentation was previously performed in 2018 at multiple locations which included Holy Cross College and the Worcester Public Library. It runs approximately 90 minutes with no intermission. Refreshments served after.