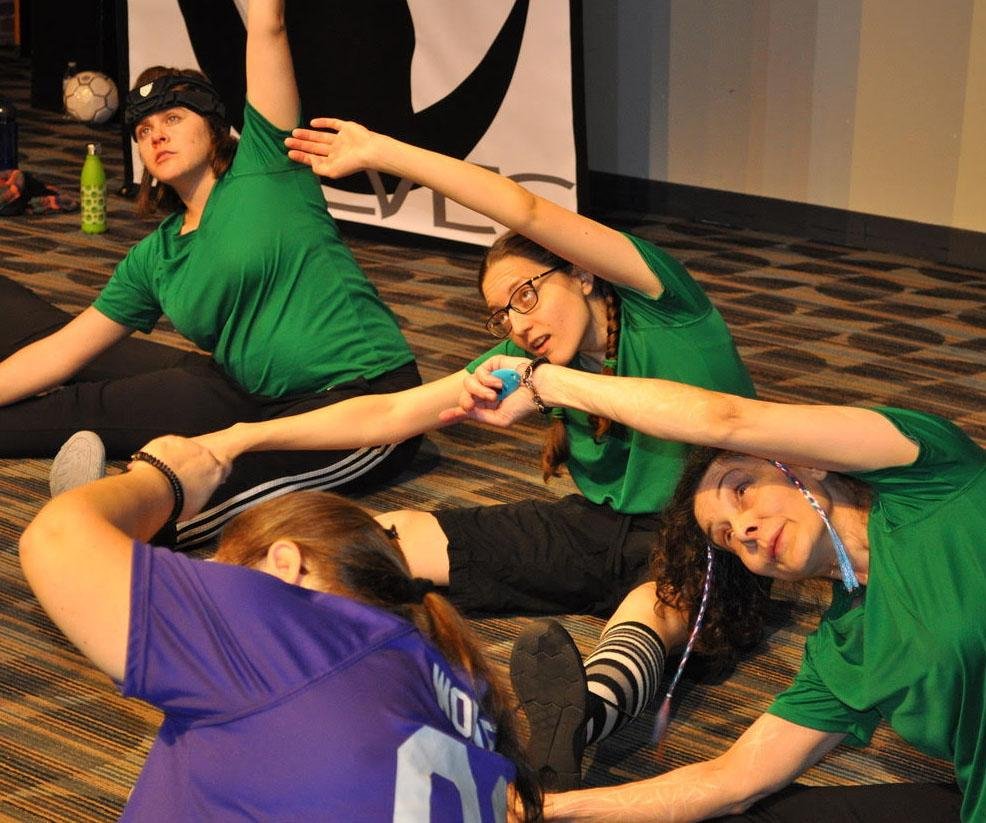 Go-Go Theater presents “The Wolves,” a finalist for the 2017 Pulitzer Prize for Drama that is occasionally amusing, occasionally dramatic and overall both enlightening and empowering.

The ground level set is sparse with just a vague outline of a 'gridiron' or playing field. Only the suspension of two opposing soccer team banners are seen: a purple one for the “Hornets” (with a nice little homage to the “Green Hornet” emblem) and one for the “Wolves.” There are soccer balls and back packs and other assorted items on the set.

While the play follows the trials and tribulations of a high school soccer team during a regular season, the “girls” are all played by women varying in age.

As the show by Sarah DeLappe unfolds, the audience in introduced to several school-age girls during their weekly Saturday morning pre-game soccer warm-ups.

Each of the cast of actresses is assigned a number as opposed to a character name, and each brings a distinctive personality to the drama, as Nogueira explains.

Under the capable direction of Lorna Nogueira and Michael Legge (and stage managed by Liana Vincini), the play shows the girls spending much of their time warming up before various games throughout their regular season. What the soccer players cannot foresee are the changes that are about to affect their lives.

It is during these “pre-game” moments where the girls discuss various issues they face, usually in overlapping conversations – from competitive and interpersonal bickering to worldwide catastrophes. The world for which one or two seem to have a vague understanding they shall ultimately inherit.

Conversations run the gamut from menstrual periods to immigrant detention facilities, from Hermoine in “Harry Potter” to the Khmer Rouge, from bullying to sex. No subject is taboo and before anything is resolved they have already moved onto the next conversation.

These “dueling dialogue” moments are all effectively timed through the blocked warm-up drills. A "clicker" is heard to signal the changes in various exercises.

To single out one performance over the others is virtually impossible as the ensemble work so fluidly together. Scenes flowed fairly seamlessly from beginning to end – so much so that the blackouts that were used hardly seemed necessary at times.

A few of the subject matters some may find uncomfortable, predominantly immature, and the language used is quite ‘realistic,’ although a bit heavy handed and quite crude at times, but never is any of the foul language used without reason…most of the time.

As with any “slice of life” drama, we only see a mere fraction of these players’ lives in DeLappe’s script.

As such, while the players come across as diverse and well-defined, there isn’t enough ‘back story’ or character development here to help draw us further into from where each character has come. Similarly, the script does not invest enough to help keep us interested in what might happen next to each player once this part of their story is concluded.

That being said, there are some very effective dramatic moments, including an impressive monologue near the end of the show by actress Lida McGirr, who does a nice job doubling in the roles of player “#14” and as her “Soccer Mom.”

Over all, this play by Go-Go Theater’s offers an objective look at the current cares and concerns of today’s youth as they slowly move into their role as progeny caretakers of the planet.