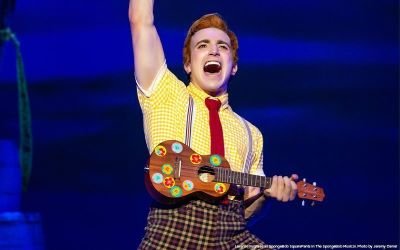 “Is this the real life? Is this just fantasy?” Definitely fantasy with “SpongeBob the Musical” at the Boch Wang Center.

What else could it be when the undersea dwellers of Bikini Bottom are all shown by terminally buoyant SpongeBob that the power of optimism really can save the world?

The denizens of the deep are faced with their own mortality as an underground volcano threatens to harpoon them with extinction. So, it is up to SpongeBob and friends to save the day.

The show, written by Kyle Jarrow, was 2018 Best Musical winner of the Drama Desk and Outer Critics Circle Awards.

Like the far left and right in the world of politics, this production will, most likely, not change any minds of those who either love or hate the Nickelodeon cartoon characters.

And those who prefer NOT to attend theatrical performances where young, sometimes crying, sometimes screaming, sometimes running in the aisles children, are in attendance, probably will want to skip this one.

However, that would be unfortunate, since the content, the production values and, above all else, the performances have long tentacles of inspired ingenuity and inventiveness which should not be missed.

Also, the list of artists who contributed to the musical’s score reads like a “Who’s Who” of Grammy Award winners.

The show is drenched in silliness that makes calling it sophomoric humor is an underestimation. That completes the list of negatives.

While the above is true, Tina Landau’s show is 100 percent unapologetic in its absurdity. It celebrates its preposterous plot from the elaborately staged opening number and never stops all the way through to an outrageous (insert dolphin laugh) conclusion and a curtain call that audiences should really stick around to see.

Landau has immersed the cartoon with brightness, colors and substantive staging that, instead of drowning it, instead navigates the material up to a totally higher plane and then gift wraps the whole thing using a story bold in its unity, cooperation, acceptance, friendship and inclusion.

Lorenzo Pugliese is thoroughly appealing as the terminally cheerful Spongebob Squarepants. It is with his solo moment in the illuminating musical number “Just a Simple Sponge” (written by Panic! At The Disco) that this show moves up its first notch from theme park musical.

Truly, the musical numbers are executed to absolute (dolphin laugh) perfection by the entire cast.

Beau Bradshaw as SpongeBob’s bosom companion, Patrick, does a good representation of the Nickelodeon character but then has the fabulous upbeat number “Super Sea Star Saviour” with the ensemble which allows him to, briefly, break free and showcase his truly phenomenal vocal range.

Similarly, the evening’s best songs  went to Méami Maszewski as  Pearl Krabs, who 'wailed' during her moments in the songs “Daddy knows Best” (by Alex Ebert of Edward Sharpe & The Magnetic Zeros) and later in the act two song, “Bikini Bottom Boogie” (by Steven Tyler & Joe Perry of Aerosmith).

Cody Cooley plays the “SpongeBob” cartoon’s antagonist, Squidward but, in this production, Cooley and Pugliese barely have any scenes together outside of some group moments.

Then, in a burst of brilliance, thanks to some wildly creative choreography by Christopher Gattelli, Cooley and members of the ensemble perform a thunderous tap number that earned its nearly two minute applauding ovation from the audience.

Daria Pilar Redus gives a steady performance as Sandy Cheeks and her character has the most layered story within an otherwise trite plot and even more pedestrian sub-plots (some, of which, practically disappear by the end of the show). But, again, this is a show that recognizes its “depth” and chooses not to try and make these characters other than those that a generation have come to know and appreciate.

Other performances worthy of note were Zach Kononov as SpongeBob’s boss (and Pearl’s father) Mr. Eugene Krabs and Tristan Mcintyre Sheldon Plankton, the true villain of the show’s story.

The show may not magically convince all children that they are watching their beloved cartoon characters magically coming alive on stage. But all the nautical nonsense on stage may make some believe in the magic of live theatre, which is just as (dolphin laugh) special.

The show runs approximately 2 hours 30 minutes with one intermission.