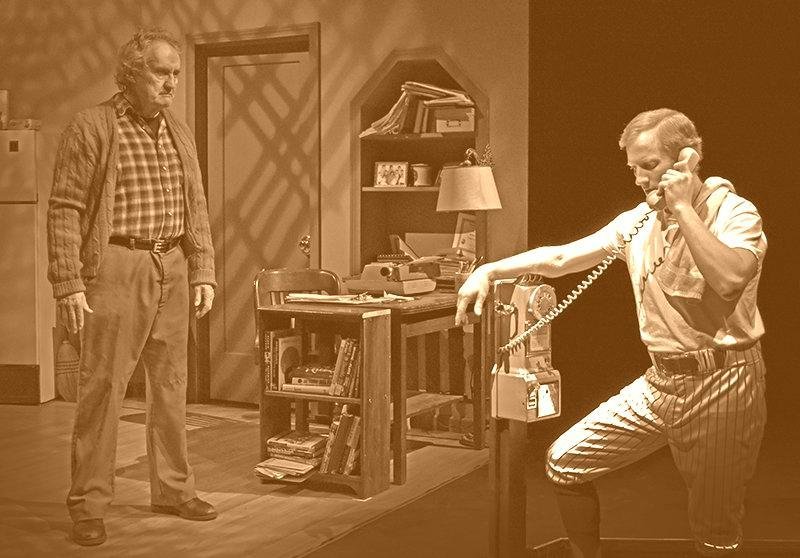 Majestic Theater takes a mighty swing at “The Pitch”

The Majestic Theater premiere’s Stan Freeman’s “The Pitch” and, while it doesn’t hit a home run with bases loaded, it certainly scores a run or two.

Director Danny Eaton capably takes the reigns in staging Freeman’s original story of a generational gap between two collaborating writers and the conflicting outcome all set against the backdrop of baseball.

Retired newspaper sportswriter Roger Pennell (John Haag) reluctantly agrees to collaborate with a young “cub” reporter, Mike Resnick (Julian Findlay), on the biography of a boyhood friend of his.

Haag fully embraces defining the character of world-weary Pennell, as if wearing him as comfortably as an old sneaker.

Findlay, conversely, offered a less comfortable, more uneven portrayal of Ivy League graduate Resnick, having a tendency to either rush his lines or burst out excitedly at strange moments in the script, turning almost uncharacteristically “dark” toward the end of the story.

That being said, the chemistry between the two is still quite good and performances solid.

According to Pennell, his old high school buddy, Vernon Peters (R. Steve Pierce), became a professional baseball pitcher - a lefty who could throw a fastball. Peters, languishing in Triple-A on a farm team for the New York Yankees, gets "the call" and found himself on the mound, pitching at Yankee Stadium.

From the moment the lights come up on stage, with announcer (Dennis Lee) doing the play-by-play, we are thrown back in time to see Peters throw his infamous one and only pitch on that fateful day nearly fifty years ago.

He throws to legendary Carl “Yaz” Yastrzemski and, when Yaz, quite easily, ‘connects’ with the ball, Peters’ career in the Major Leagues disappears as quickly as it appeared.

But other factors contributed to the pitcher’s demise and Resnick investigates much to the apprehension of Pennell, who feels cornered into the collaboration. What Resnick does not know is just how much of Peters’ career oblivion is connected to Pennell. As the two-act play unfolds, he edges closer to solving the mystery and uncovering the truth. 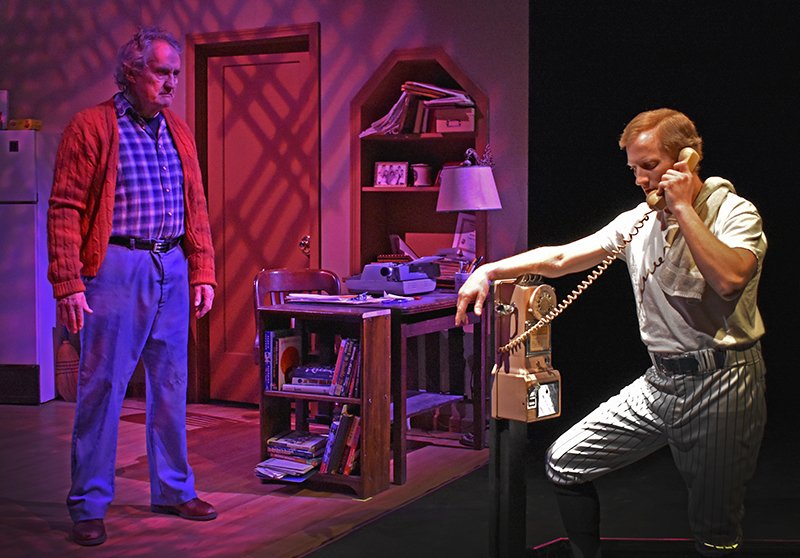 John Haag and R. Steve Pierce in Stan Freeman's "The Pitch".
Photo Courtesy of the Majestic Theater WebsiteThe Act One climax seemed abrupt and did not connect back to the driving story of “The Pitch,” instead opting to focus on Pennell’s intrusion into Resnick’s personal life (an intrusion for which Resnick will later return, in kind and in spades, to Pennell during Act Two). If somehow a nod back to Peters in some way had been allowed for, it would have provided for a more effective and multi-layered “cliffhanger” between acts.

The interactions between Pennell and Peters and ultimate revelations in Act Two are engaging and there probably could have been more exchanges during Act One. Instead of dropping hints along the way, the bulk of his story is revealed in one big “swing” in the show’s second act.

Katie Sloan does a fine job portraying a pivotal character in the story, but Freeman’s structure does not allow her character a chance to develop and not nearly enough time on stage for us to be able to connect with her side of the story, which could provide a whole new perspective or dimension to the piece.

The set design by Greg Trochlil is an impressive construction of an single man’s rundown apartment – an ugly, bare minimal dwelling appropriate for Pennell who does not seem to wish it to be anything more than what it is. It alludes to what Pennell feels he deserves – to live in his “alone-ness.” An isolation he sees as fit punishment for his sins.

And the above is where “The Pitch” does hit a home run, much of it thanks to the perfectly pitched character written by Freeman hit out of the park as a result of the performance by Haag.

The show is approximately two hours with one intermission.