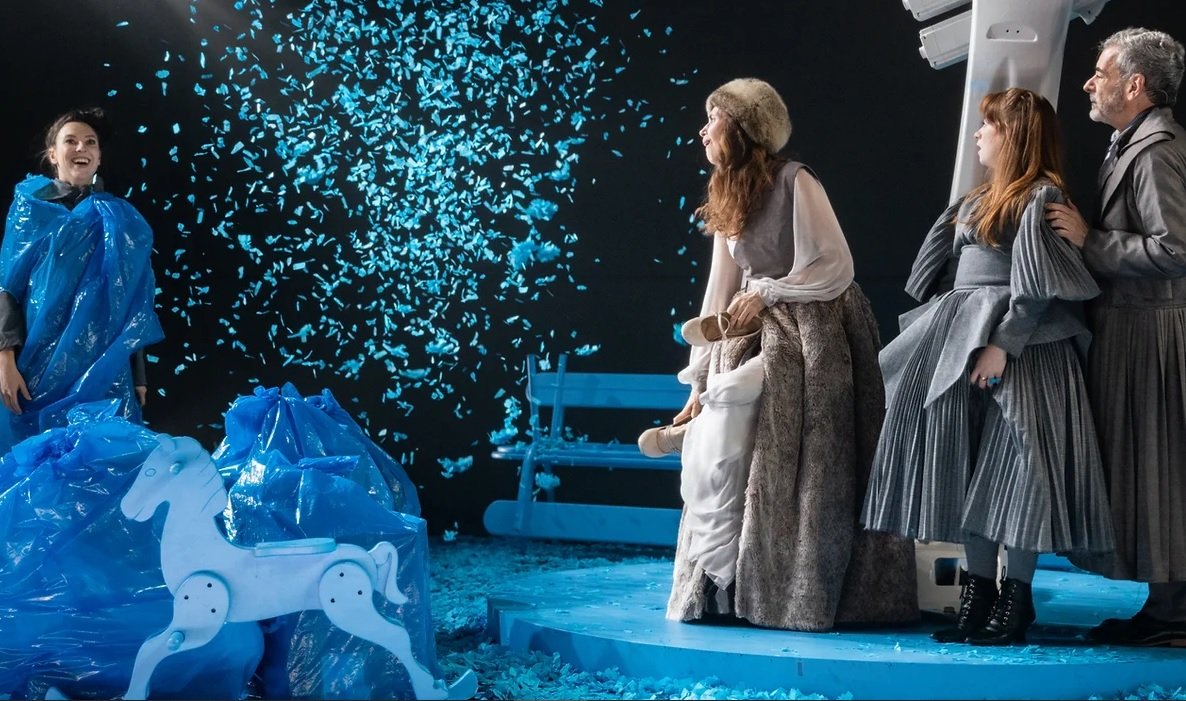 (Cover Photo: The CAST of "THE CHERRY ORCHARD" playing at the Paramount Center, ArtsEmerson in Boston, MA. through November 13, 2022. Photo Courtesy theorchardoffbroadway.com)

"We'd be better off if we all would just shut up for a while!”

Based on The Cherry Orchard by Anton Chekhov

As translated by Carol Rocamora

And Mikhail Baryshnikov as Firs

•The Orchard /an auction/ - online through a live virtual, interactive experience available worldwide Tickets On Sale September 20 at www.TheOrchardOffBroadway.com

Now playing at the Paramount Center, ArtsEmerson, Anton Chekhov's "THE ORCHARD," in Boston, MA. through November 13, is simultaneously mesmerizing and confounding and altogether stunning.

The multimedia event is an all out assault on the senses and should not be missed.

Chekhov, for many drama students, can certainly be a difficult first read and never moreso than in The Cherry Orchard. It can be their first real introduction to the format of a play that operates at a more cerebral level than plays they might have previously read.

The Cherry Orchard came out in 1904 and concerns the issues and concepts of social change, independence and freedom but in very bellicose, somewhat disconnected language.

Yet, it is in this unusual structure where, in between the disconnect, what remains speaks volumes.

The dialogue reads at an elevated level, unlike more traditional contemporary plays, making the reader feel as if no character in The Cherry Orchard really wants to be involved in a conversation with whomever they are conversing.

Even given this, there are moments where Chekhov's characters speak of experiencing moments of joy, fleeting or limited though these moments may be, which permeate the encroaching despair caused by a world changing all around them. 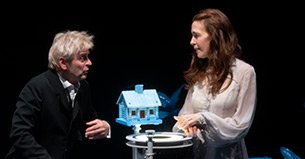 (Cover Photo: Jessica Hecht and Mikhail Baryshnikov in a scene from "THE CHERRY ORCHARD" playing at the Paramount Center, ArtsEmerson in Boston, MA. through November 13, 2022. Photo Courtesy theorchardoffbroadway.com)

Some film directors occasionally note a passion for watching foreign films without the use of subtitles to allow the visual representation of the screenplay alone to come forth on its own, unfettered, without subtitles "talking down" to the film's audience.

Similarly, Golyak's adaptation allows the visual to tell most of the Chekhov tale, leaning less on the playwright's text alone.

What images Chekhov's play evoked for the reader, especially in the area of elevating perception, director Golyak does for the spectator of this dazzling visual hybrid piece.

Much of the finest examples of the visual legacy of late photographer, Linda McCartney, comes from the proficient way McCartney was able to juxtapose great beauty against great bleakness.

Golyak's "THE CHERRY ORCHARD" magnificently captures this same juxtaposition of great beauty against great bleakness in a live presentation where not one spot on this artist's canvass is left vacant.

The entire "feel" of the multitasking presentation runs the gamut from mechanical, celestial, political, digital and even spiritual.

Whether or not you can understand the dialogue, the visual is always there, ever present, to "punctuate" the intention of each and every line spoken.

Not only does the dialogue transcend language, it also makes proficient use of multiple languages including American Sign Language.

Every single moment of dialogue and blocking is given its own visual personality which is a spectacular achievement.

Mikhail Baryshnikov portrays the aging eccentric "Firs"  whose senility is symbolic of social change in the form of an old order collapsing.

Addressing the "elephant in the room" - does world-renowned ballet performer Baryshnikov dance in this play?

All that I will reveal is that he does not need to. His performance as the elderly FIrs is captivating any time he appears on stage.

The play is run as a single performance piece running at less than two hours but the play itself is broken up into four segments or "Acts."

This experience is virtual theatre and visual art at its most magnificent - blending in Chekhov's already absorbing and historical theatricality with various cast members interacting with modern day technology such as an active viewscreen, a giant, robotic arm and small robotic dog.

Do not fail to see this production before it leaves Boston.

Approximately one hour 40 minutes with no intermission. 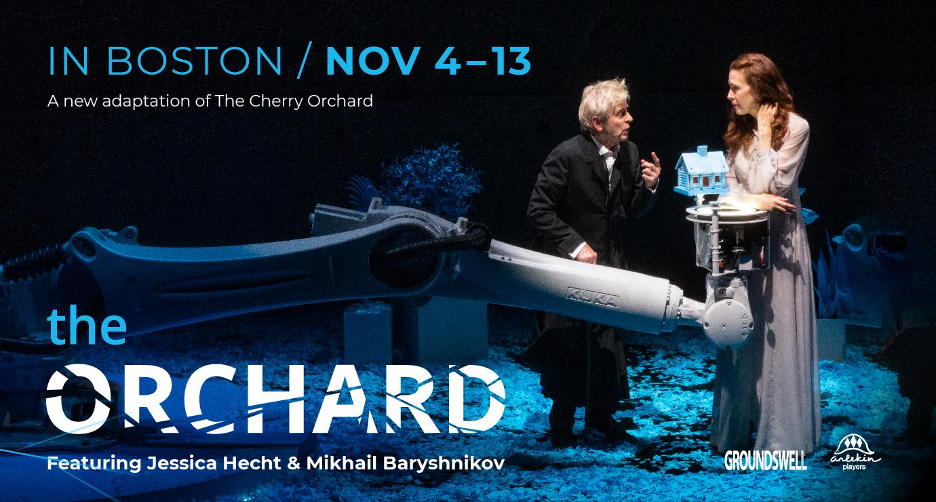 The Orchard invites us into the strange, fragile and beautiful world of a family yearning for connection and struggling with the end of their world as they know it.

Threatened with foreclosure and the loss of their beloved orchard, they face unstoppable, destructive forces that dismantle their lives like the breaking of a string.

Developed throughout the pandemic in Arlekin’s Zero Gravity (zero-G) Virtual Theater Lab, this newest work is a hybrid piece of theater, including opportunities to experience the production two ways:

The Orchard /an auction/, a virtual experience online.

The Orchard - Live & In-Person at the Emerson Paramount Center The Orchard is a fully staged live performance of The Cherry Orchard as translated by Carol Rocamora and adapted by Golyak, including new material.

To create the rich, immersive world of The Orchard, Golyak worked with an international team of collaborators from across the globe, spanning gaming, film, theater, robotics and emerging technologies, with Scenography by Anna Fedorova, Lighting by Yuki Nasake Link, Costumes by Oana Botez, Sound Design by Tei Blow, Projection Design by Alex Basco Koch, and Robotics by Tom Sepe of dotdotdash.io.

In both the in-person and online versions, audiences enter the ephemeral, blue, lost world of the orchard which is inhabited by a giant, Kuka robot arm and layered with vivid live video elements, where they meet a fragile family trying to keep their lives from coming apart.

“It’s a dream to be bringing The Orchard to Boston on the heels of our run in New York. And it’s exquisite having Jessica and Misha leading our beautiful cast. This is a story about the delicate relationships at the center of a family facing the end of the world as they know it. We are living through an unimaginable time of change and upheaval with the war in the Ukraine and the pandemic. The loss of the cherry orchard is the loss of our world as we desperately try to stay connected and keep things from falling apart. Creating this in New York was an incredible launch for The Orchard, and it means so much to share it in our home city at this exact moment,” says Golyak.

The Orchard /an auction/- An Online Virtual Experience The Orchard /an auction/ is a unique online experience, available worldwide. Audiences from around the globe are invited to gather in real time for the auctioning of our cherry orchard, and to travel with the characters of the live performance of The Orchard at Emerson Paramount Center, taking an interactive journey with this family in crisis as they face the loss of their home, their land, and the world as they know it.

The virtual experience was conceived by Golyak and is a new, updated iteration of a version shared in New York in May/June 2022, with a virtual set was designed by Anna Fedorova, direction of photography and video effects by Alan Mandelshtam, and interactivity narrative by Tom Abernathy.

The in-person and online versions will run live and simultaneously.

“The Orchard is fascinating because we keep iterating it. It has been a true labor of love and an adventure to produce, and it is evolving as we share more performances in person and online. I have honestly never been part of a team like this and it is thrilling to work with such incredible collaborators pushing the edges of theater, film, gaming, robotics, projections, narrative, video effects, and with such a stellar cast. It’s visceral, and high tech… and human; I promise it is like nothing you have experienced before,” says executive producer Sara Stackhouse.