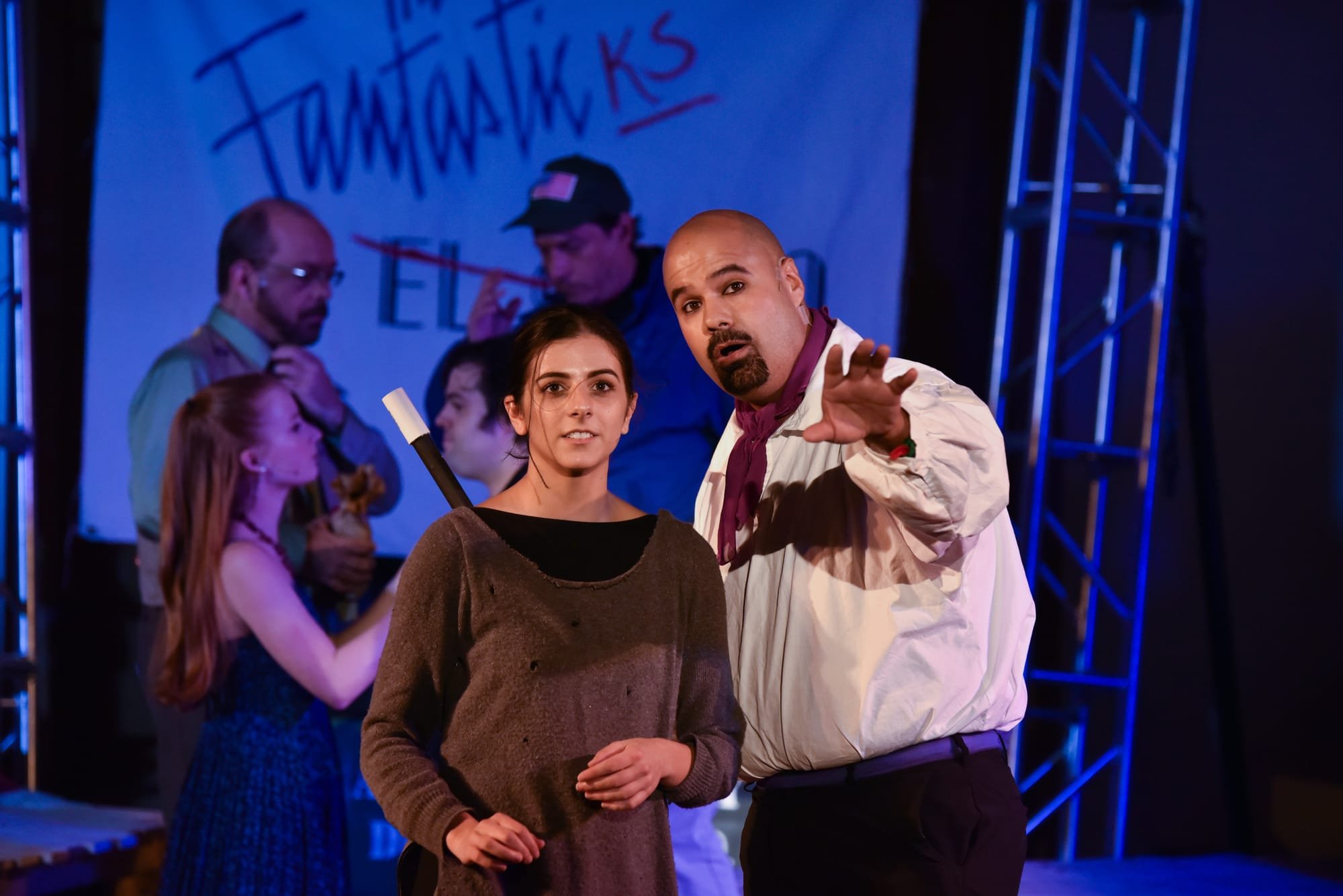 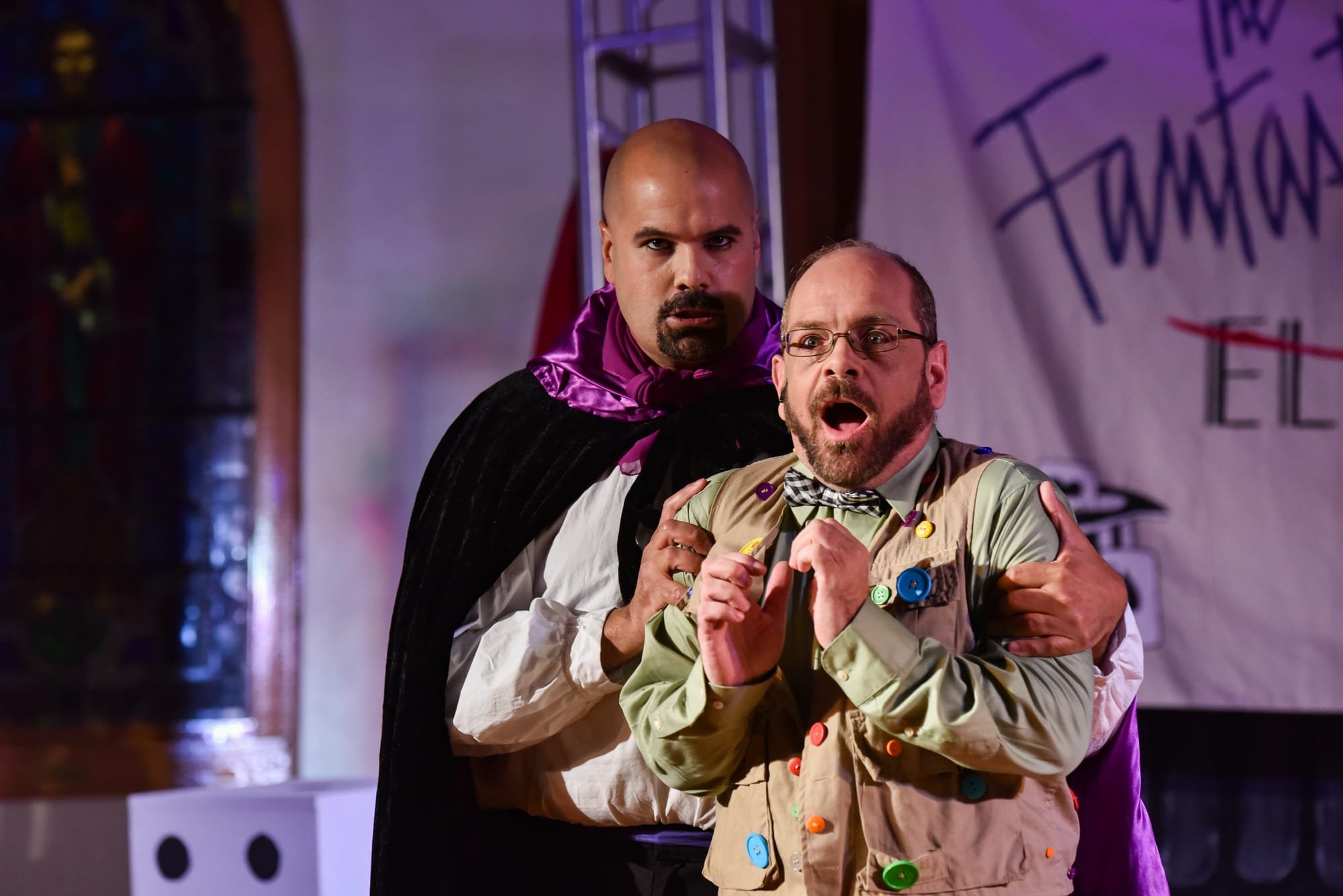 “Try to remember the kind of September, when life was slow and oh so mellow”

With this latest September now almost a memory, now is an appropriate occasion to remember a show previously enjoyed by millions over the course of four decades, in a first-rate new staging of the musical fable “The Fantasticks” as presented by Studio Theatre Worcester at the Greendale People’s Church.

Age certainly has not withered the musical, which was one of the longest running shows Off Broadway (42 years). But some may have forgotten elements that made the show an NYC staple for all those many years.

Such was the epic challenge for Studio Theatre Worcester (STW) for this, their second show, and the first full-fledged musical staged by the area’s newest professional theatre company.

But, in their staging, situated in the back alley of a now-defunct (deceased?) magician’s show in Atlantic City, STW “tries to remember” what made the show iconic. Then, it successfully executes the material, a fairy tale about love, male/female role expectations, family and growing up, making one immediately recall the reasons for “The Fantasticks” enduring charm. 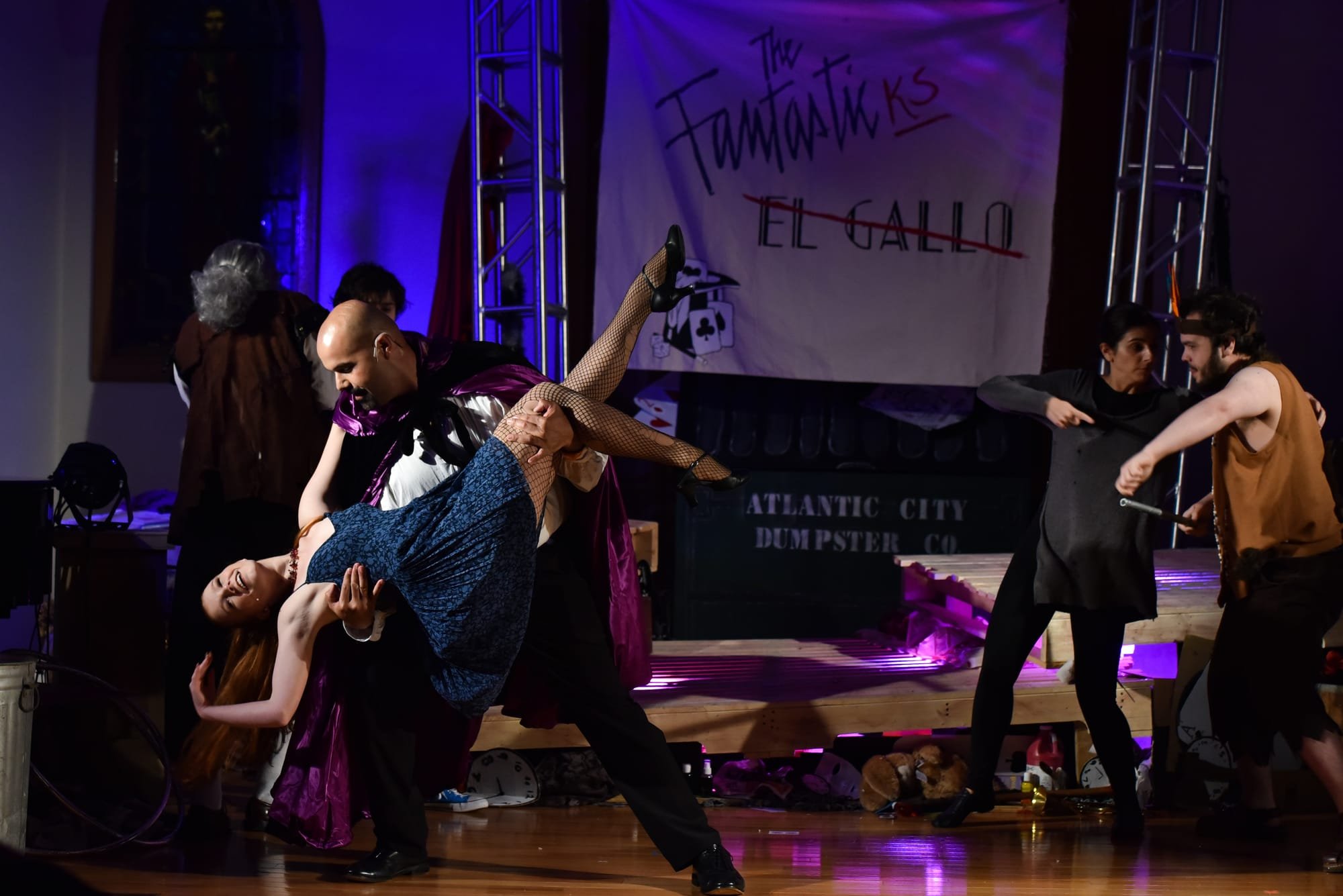 First, it must be admitted that, conceptually, even by today’s standards, it is an anomalous show, as written by Tom Jones (the librettist, not the iconic singer).

Not quite Commedia dell'art, it still plays out like a unique, prolonged absurdist musical sketch, as one might see performed on SNL as part of Mike Myer’s old running segment “Sprockets”.

But, under the perceptive direction of John Somers, the ensemble delivers solid performances elevating the quirky plot and humorous dialogue provided by Jones and the richly layered score provided by Harvey Schmitt.

Outside of Schmitt’s score, what audiences may not “remember,” is that this show is also quite funny. Damn funny, in fact.

Loosely based on the play “The Romancers” (aka “Les Romanesques”) by Edmond Rostand, the musical is structured in an eccentric configuration, intentionally falling in and out of rhyme.

The plot plays out like and odd antithesis of “Romeo and Juliet” where, instead of two families opposing a union between two lovers, the two fathers in “The Fantasticks” actually maneuver the duo together.

The show concerns two houses, separated by a “wall” displayed by “the Mute,” played by Lorae Wegner, who is exemplary as she provides a multitude of props throughout the show, occasionally becoming the “prop” herself.

Wegner, superb without uttering a sound, speaks volumes with every gesture, move and expression.

Neighboring fathers, Bellomy (Paul Conway) and Hucklebee (Derek Sylvester), manipulate their respective children, Luisa (Reilly Harring) and Matt (Norman Dubois), into falling in love by pretending to feud. Their reasoning for why the fathers want this family merger is a far fetch but their intentions becomes all too clear as the show progresses.

To help the fathers in their scheme to join houses, they enlist the aid of roguish vagabond actor named “El Gallo” (Pedro Figueroa).

El Gallo arranges for a “mock abduction” with the help of two old actors, Henry (Ralph Stokes) and Mortimer (Kyle Collins) whose moments on stage are quite hilarious.

“Where are the mothers,” one might ask? Who knows? They barely even get mentioned, somewhat signifying that, without their presence, the fathers lack someone to provide them with a certain “moral compass,” which would explain why they endeavor in such an outlandish scheme.

Indeed, the score is memorable. Harring and Dubois, as the young lovers, provide some wonderful musical highlights, but Dubois struggled with the harmonies in their duets “Soon It’s Gonna Rain,” “They Were You” and “Metaphor,” while Luisa’s solo in “Much More” was breathtaking.

Figueroa is charismatic and contributes to the strong vocal ambience throughout, but did start off a bit winded during the show’s opener and signature tune, “Try to Remember.”

Scenes occasionally require two of the eight performers to work, in tandem, off one another in order to make the material most effective, and here STW executes very well.

Conway and Sylvester had fine chemistry, “riffing” off each other in their scenes. Their voices also blend particularly well as they duet, most notably in the number “Never Say No.”

Realizing their father’s con, Matt and Luisa re-evaluate their relationship and decide to separate. This is where the second act of the script by Jones meanders somewhat as it forces the audience to “sightsee” their respective journeys (about as interesting as watching an old vacation slideshow by your great aunt… on a projector that never worked and, when it did, it didn’t hclp…but we digress…).

Meanwhile, the fathers (and, perhaps, many in the audience) sit, wait and hope for an ultimate reconciliation. It is because Harvey Schmitt’s score is so superlative, it blends in well with the story provided by Jones and, like its own merging of two houses, the collaboration makes it work.

During “Fantasticks” the cast barely ever leaves the stage and, at times, through some remarkably long sequences, must remain in a “freeze” position during scenes in which they are not involved.

Music was expertly performed under the direction of Kris Layton, who plays piano and has the remarkable ability to make the score sound like it is being performed by a full musical combo. The addition of a harp was a nice touch. 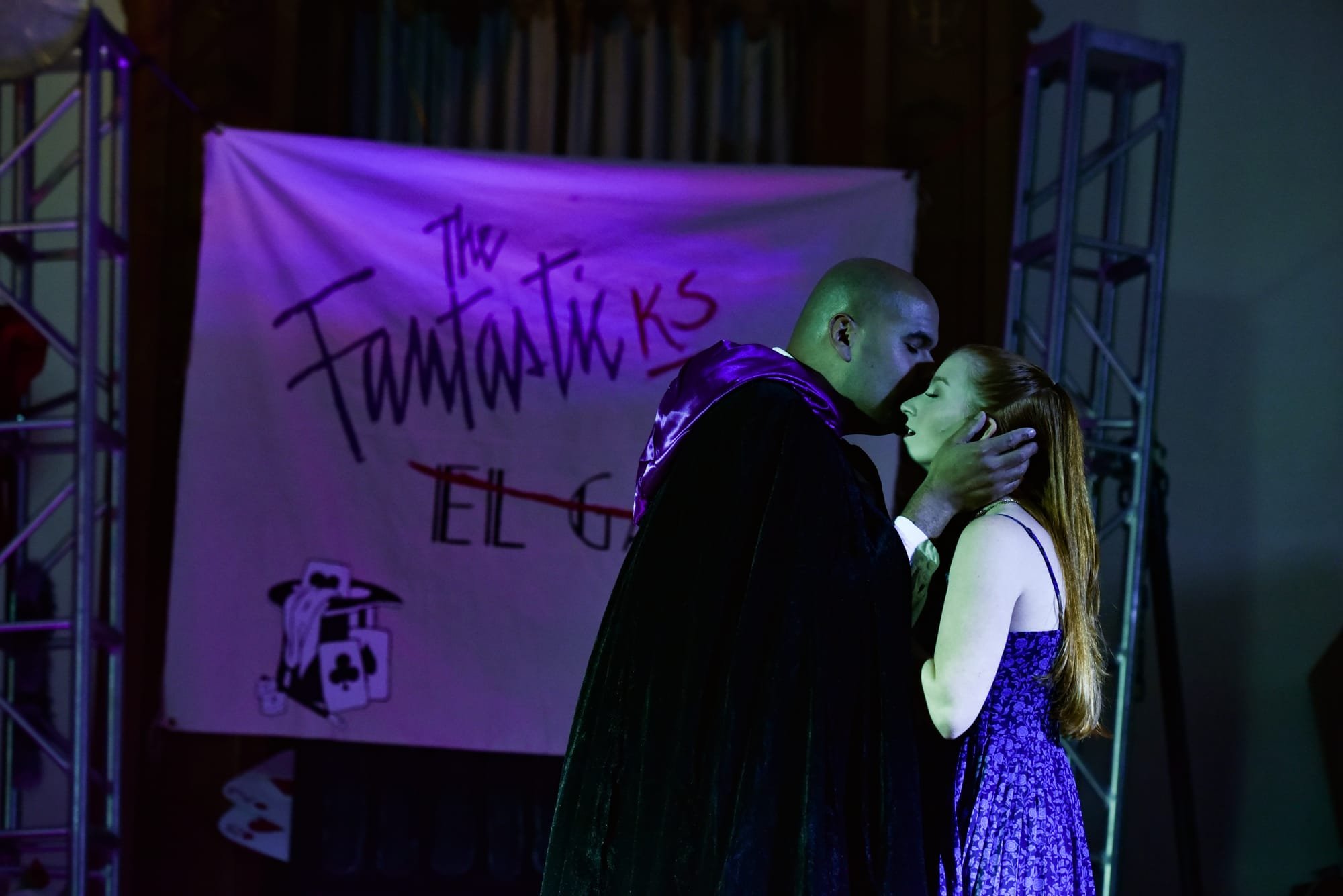 As scripted, the end of the show feels rushed, with any loose ends being wrapped up so quickly they get lost, but overall a minor complaint considering how well the rest of the show is staged by director John Somers.

Lighting designer David Farrah perfectly aligns to Somers’ intricately conceived set that still paid homage to the original production. There were some occasional sound issues as some cast body microphones were feeding back at times, most notably on Dubois.

Only once in a "blue moon" does a show like "The Fantasticks" come along and this production by Studio Theatre Worcester provides both reverence and relevance to the classic material making it thoroughly enjoyable.

The show runs approximately two and a half hours with one 15 minute intermission.

Three and a half stars.