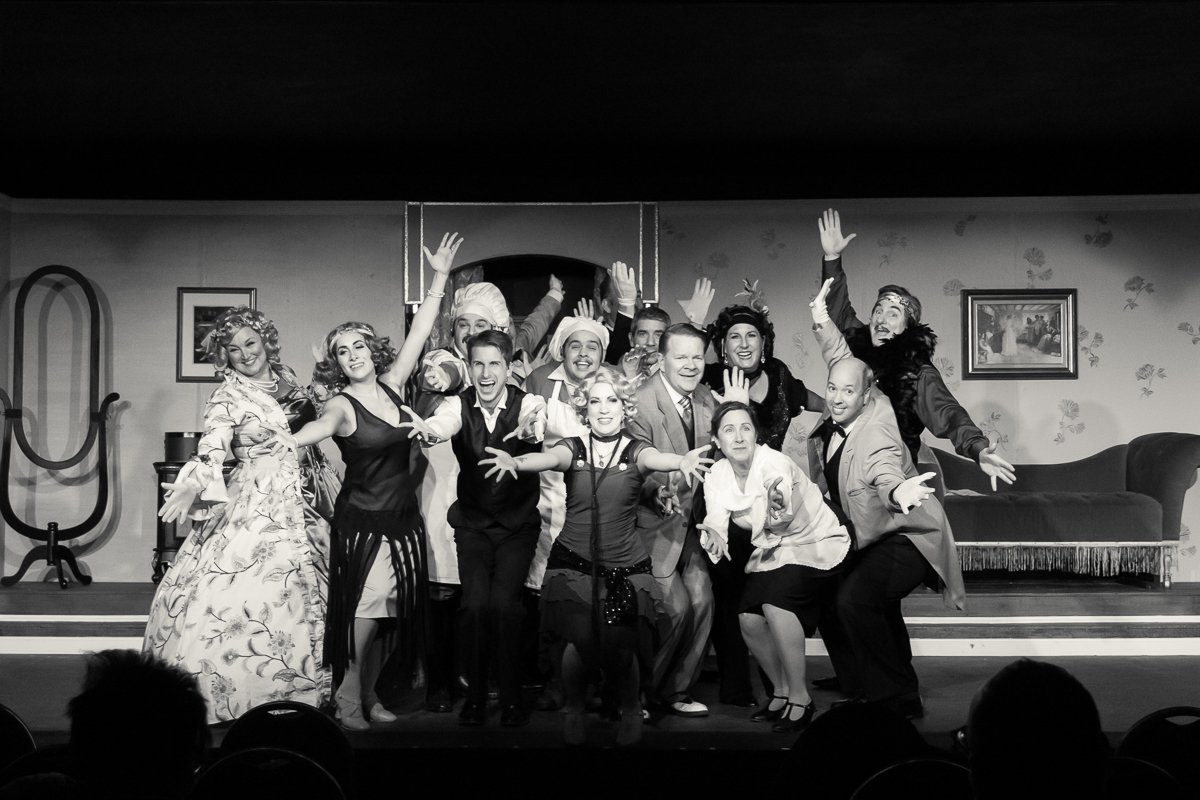 (Cover Photo of Cast of "The Drowsy Chaperone" at WCLOC. All photos courtesy of Christopher O'Connor)

Worcester County Light Opera Company presents a guaranteed fun time for all with its latest production, “The Drowsy Chaperone,” featuring a delightful score.

Packed with show-stopping numbers and larger-than-life characters, the show is a Tony Award-winning spoof that will have everyone falling in love with zany musical comedy!

The structure of the show is one part satire and one part love letter to the early days of show tunes and show people. It has an almost “Monty Pythonesque” quality in that it recognizes the medium it is in and comments a lot on its own absurdity brilliantly.

In the tiny living room of a diehard theater fan known simply as “Man in Chair” (Corey Cadigan), a forgotten musical comes to life.

The Man in Chair enthusiastically shares, with the audience, his favorite Broadway cast record (reinforcing by saying “yes, record”) and, emerging through an opening gold curtain, a vintage musical comedy known as “The Drowsy Chaperone” begins.

Under the competent musical direction of Lenny McGuire, the show bursts onto the compressed WCLOC stage bringing song, dance and pure entertainment.

The eccentric Man in Chair serves as our narrator, filling in all the plot holes (and there’s a bunch), with laugh-out-loud results.

The Man in the Chair not only speaks affectionately of the music, the story and cast, he languishes in it, engaging the audience by relaying his own lifestyle (which includes a great need to escape reality).

As we probe deeper into the musical, it becomes obvious the Man in Chair feels his own burdens lightened best by listening to this particular show.

The fictitious musical “The Drowsy Chaperone” is written by the equally fictitious Julie Gable and Sidney Stein. In reality, the musical, which won Tony awards for best script and best score, was written by Bob Martin and Don McKellar with music and lyrics by Lisa Lambert and Greg Morrison.

The show takes place on the “Tottendale Estate” and we meet all the essential characters. Director Sally Holden and WCLOC have certainly cast some of the best of the best performers in the area and all are well-suited to their assigned characters.

Janet is the star attraction for “Feldzeig’s Follies,” with Kevin Moylan portraying her harried producer, Mr. Feldzeig. If Feldzeig loses her, he will be in a deep financial dilemma with a pair of goofy gangsters disguised as pastry chefs (Kyle Collins and Norman Dubois). 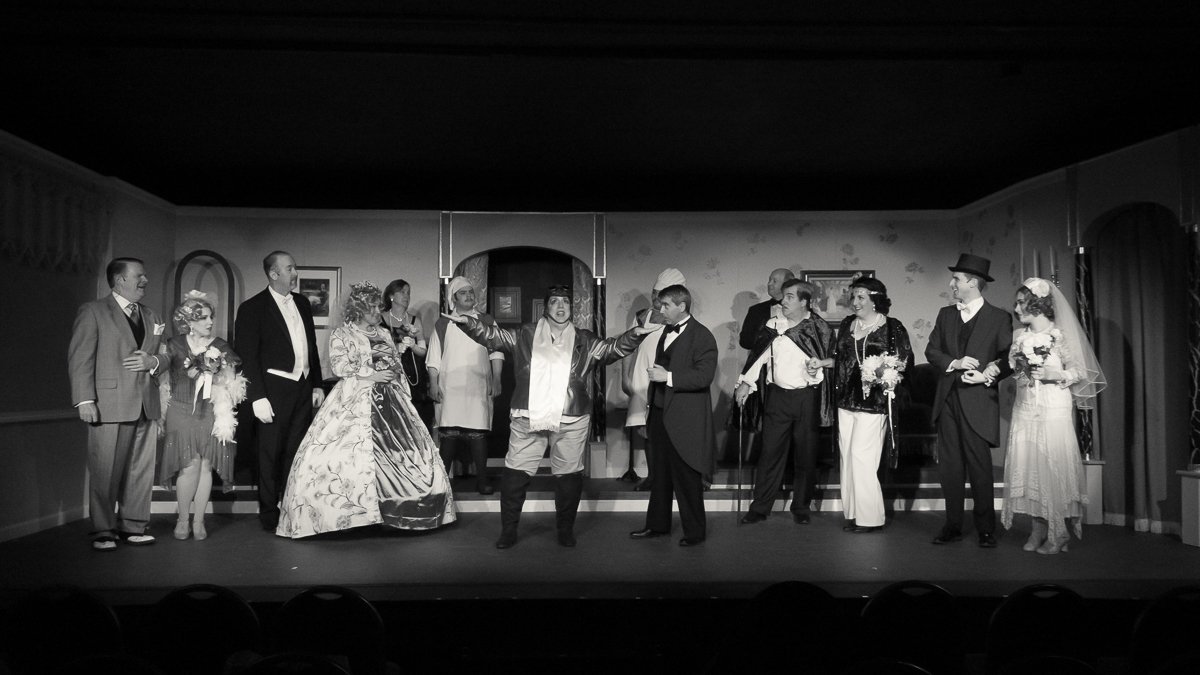 (Cast of "The Drowsy Chaperone" at WCLOC.
All photos courtesy of Christopher O'Connor)

The gangsters threaten to see that Feldzeig receives his “just desserts” (among other food puns), which serves as a hysterical lead in to “Toledo Surprise.”

Latin lothario Adolpho (played by Steve Murray in an intentional nod to the ethnic stereotyping prevalent during this era) is hired by Feldzeig to bed Janet and thus ruin the impending nuptials. However, the bungling Adolpho instead winds up wooing the Drowsy Chaperone (Nicole Lian) herself.

Both Murray and Lian are equally charming in their respective roles, with Murray who struts in his signature number “Adolpho” while Lian intentionally and splendidly stupefies in her “inspirational” number, “As We Stumble Along.”

Sewell’s adeptness at physical comedy is as entertaining as his dance ability as he excels in the tap dance number, “Cold Feets,” with best man George (Michael Celularo).

Choreography by Christine Seger was restricted by the WCLOC stage space but she managed to work wonders with what space she and the cast had. The numbers “Cold Feets,” act one closer “Toledo Surprise” and Janet’s tour de force number “Show Off” were all major highlights of the show.

With “Show Off” there were some quick comedic bits that Gulli performed that did not completely land as they should have, but it did not diminish the overall enjoyment of the number itself. Gulli was also instrumental in working a lot of her reactions to her fellow cast member “moments” on stage, which made their musical numbers stand out more. 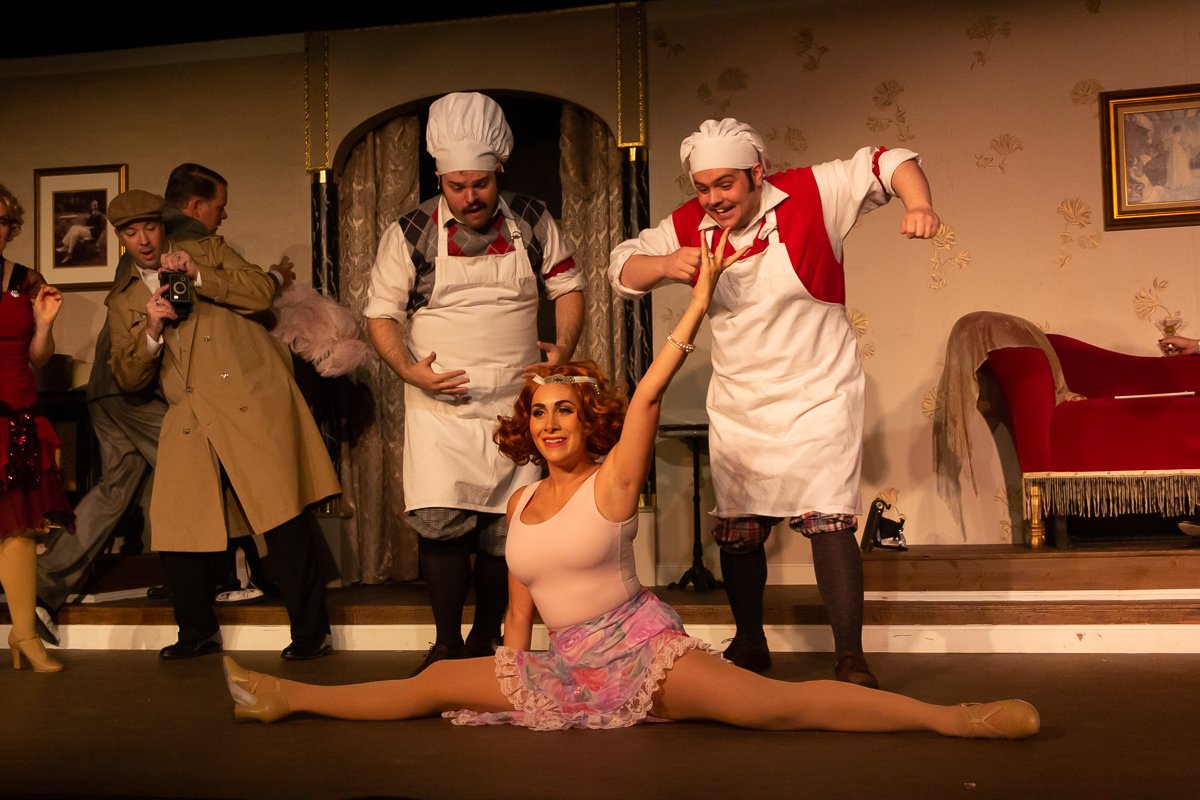 The set design by Tom Powers was very well-suited to the material, and it sequestered the pit musicians off stage right, which allowed for more seating on the house floor and served well for more seamless transitions on stage.

However, sitting far house right, where the musicians are sometimes located, might still prove to come with an obstructed view as a result of an overextended closed curtain. Out about four feet, a lot of action on stage left was lost.