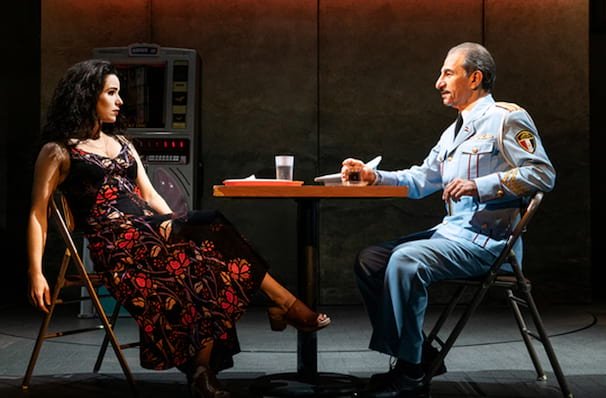 (COVER PHOTO: Janet Dacal and Sasson Gabay in a scene from "The Band's Visit," playing at the Hanover Theatre in Worcester, MA. now playing through June 19, 2022. Photo Credit Matthew Murphy)

"Nothing is as beautiful as something that you don't expect. "  David Yazbek

Based on “The Band's Visit” story by Eran Kolirin

"The Band’s Visit" is the final offering of the Hanover Theatre's Broadway Series 2021-2022 season and certainly ends the season on a high note.

The show is described by the 2021 tour as a "joyously offbeat story, set in a town that’s way off the beaten path, a band of musicians arrive lost, out of the blue. Under the spell of the desert sky, and with beautiful music perfuming the air, the band brings the town to life in unexpected and tantalizing ways. Even the briefest visit can stay with you forever."

Somewhere between the borders of Egypt and Israel, a band en route to an important gig find themselves stuck in a small locale with a very similar sounding name to their actual ultimate destination. The tour is momentarily ceased.

As the first person they meet, Dina (portrayed by the fabulous Janet Dacal) points out in her witty number, "Welcome to Nowhere":

Similarly, somewhere between Pittsburg and Baltimore tour dates in March, 2020, the "Band's Visit" tour ceased due to the pandemic. The show remained on hiatus for the balance of 2020 and throughout most of 2021.

Now back on tour in 2022, the touring production is a welcome return, for sure, and the entire musical flows with an unceasing, impressive attention to detail.

The cast is sublime and all the performances solid, including several last moment "swings" who hit the stage and performed flawlessly. Swings at the June 16th performance included Dana Saleh Omar as "Julia," Hannah Shankman as "Iris," and Nick Sacks as "Itzik."

Unlike earlier Hanover shows of this past season, "Band's Visit" is not a "high octane" musical like "The Prom" that hits on multiple levels, both musical and satirical. Nor is it a dance spectacular like "CATS" nor a jukebox musical a la "Margaritaville."

No. Like the movie it was based on, "The Band’s Visit" has its own unique charm. It is a thoughtful, plodding, far more somber story that unfolds slowly, gradually yet pulls you in. You simply cannot leave until learning what ultimately will happen to these characters you come to care about.

From the show's opening number, "Waiting," to the closer, "Answer Me," the music happens in an enervated fashion, infused with a Middle Eastern influence that is both haunting and mesmerizing.

The above mentioned slower pacing may not work for those expecting high stepping musical comedy and/or others who may not be willing to sit still for a solid one hour, 45 minutes without an intermission.

For those that came into the theatre knowing what to expect, however, it was pure joy to behold. (PHOTO: The CAST of "The Band's Visit," playing at the Hanover Theatre in Worcester, MA. now playing through June 19, 2022. Photo Credit Matthew Murphy)

The creative team have designed a magnificently functional turntable set for which Cromer has staged almost every single movement by every person on stage.

Each scene unfolds fluidly and locks you into the moment. You cannot look away, almost like reading each and every pivotal chapter of that mystery book you simply cannot put down.

When compared to “Dirty Rotten Scoundrels”, “Full Monty” or even “Tootsie,” (which starts the Hanover's upcoming 2022-2023 season) while his music always flows beautifully, those scores tend to have a lighthearted feel - whereas “Band’s Visit” is more intricate, eloquent, occasionally melancholy or even, as the lyrics below convey, more subdued.

“You glow, she glows. Two suns, no shadow.

Your skin, her skin, And everything's alight.

No edge, no edge. No walls, no border.

Two streams of water, That become the sea.”

In this complex world, there seems to be a fervent need for "basic" by many people these days.

The people we meet in “Band’s Visit” are from two very fervent, very complex worlds with equally complex histories.

Thrown together for a single evening, each person we see finds their own unexpected "need" for some basic human companionship that they either did not seek or perhaps they did not want - but this meeting ultimately changes them all, fervently, forever.

Basically, just as sure as the seasons change in New England, “The Band’s Visit” is a musical that is a fabulous way to end this latest season for the Hanover Theatre as we anticipate their return in the fall.

Approximately one hour and 40 minutes with no intermission

The critically acclaimed smash-hit Broadway musical The Band’s Visit is the winner of 10 Tony® Awards, including Best Musical, making it one of the most Tony-winning musicals in history. It is also a Grammy Award® winner for Best Musical Theater Album.

In this joyously offbeat story, set in a town that’s way off the beaten path, a band of musicians arrive lost, out of the blue. Under the spell of the desert sky, and with beautiful music perfuming the air, the band brings the town to life in unexpected and tantalizing ways. Even the briefest visit can stay with you forever.

With a Tony®- and Grammy®-winning score that seduces your soul and sweeps you off your feet, and featuring thrillingly talented onstage musicians, The Band’s Visit rejoices in the way music makes us laugh, makes us cry, and, ultimately, brings us together.

“One of the most ravishing musicals you will ever be seduced by. David Yazbek’s simmering score, which inflects Broadway balladry and character songs with a haunting Middle Eastern accent, feels as essential as oxygen.” - The New York Times

“It doesn’t feel live any musical ever. It doesn’t sound like anything else you’ve heard. Perfect is the wrong word for such an unusual musical, but it will just have to do.” - New York Magazine