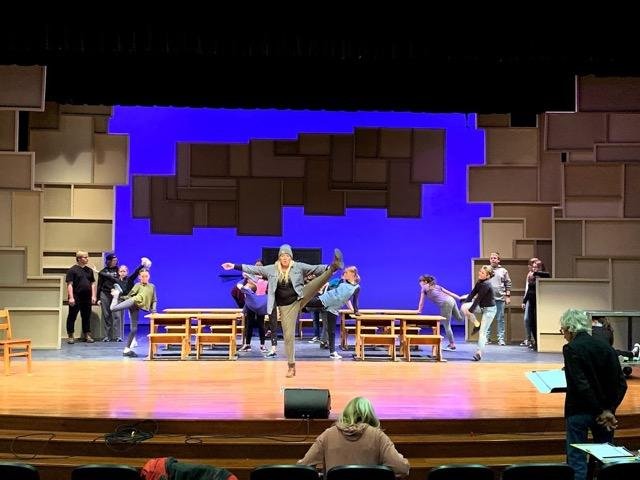 In “Roald Dahl’s Matilda the Musical,” Gilbert Players latest offering in Hardwick, a young girl discovers telekinetic powers late in the show and, between that superhuman power and her own self determination, overcomes a wretched home life and a bully school administrator.

The show, based on the 1988 story by Roald Dahl, premiered to great accolades and multiple awards in 2011 in the U.K. and has since played on Broadway and all over the world. On Broadway it won five Tony Awards.

The show is a bit of an oddity – With a book by Dennis Kelly and score by Tim Minchin, it isn’t constructed very well, the songs aren’t altogether memorable, and many characters are two-dimensional, vulgar and/or unpleasant.

Yet, for some reason, many people find the show quite appealing.

Certainly, Dahl’s “Matilda,” just like his other, more famous story, “Willy Wonka and the Chocolate Factory” is not like many of the “cookie cutter” family-friendly musicals like a “Beauty and the Beast” or “Little Mermaid.”

Matilda Wormwood (Isabel Coviello) is much more like a Charles Schulz “Peanuts” character in that she has the mental capacity of an adult. Only a major contributing factor to her advanced vocabulary and intelligence is reading which she does as a coping mechanism to combat her horrid family life.

The rest of the Wormwood family: Matilda’s Mother (Jeaneanne Pugliese), father (Kenn Robinson) and practically mute brother (Loren Bennington) virtually ignore her or, when they do notice her, torment her. Her father, a crook and a cheat, doesn’t even notice Matilda as a daughter as he keeps referring to her as a “boy.”

Coviello is a little dynamo in the part, and she has to be. Most of the cast literally depend on her to make them look as good as she does. And she succeeds as most of the performances, interacting with the young Matilda, are splendid.

United Kingdom accents have been eliminated. However, the show is still a product of the UK and much of the vocabulary in the dialogue is still UK specific. In fact, some of songs sound as if the performers learned to sing them using a UK accent.

She also narrates a tale of her own to the local librarian, Mrs. Phelps (Cindy Doyle). Iit is of an Escapologist (James Lameroux) and his acrobat wife (Darrian DuVarney). The doomed couple are saddened as they cannot conceive a child and, when miraculously they do, are forced into performing an ill-fated dangerous routine which causes one of them to die.

Jeaneanne Pugliese and Kenn Robinson as the Wormwoods fully embody their respective sleaziness and their sour humor and shenanigans bring the most laughs to the show.

Julie Capone Bouchard as bitter, cartoonish bully Miss Trunchbull, has impeccable comedic timing and handles the physical comedy quite well, enhanced by her odd appearance which is thanks to her hysterically constructed costume.

Cassie Blanchette has a beautiful voice and impresses as “Miss Honey,” a school teacher who loves her class and adores young Matilda.

Choreography by Darrien DuVarney and Jackie McGerrigle was not anything elaborate or complex but what was also included was some fine staging by director Linda Tomasi.

During the number “Loud” (sung by Jeaneanne Pugliese as Mrs. Wormwood), there was some wonderful added ballroom elements which involved dancers Darrien DuVarney, Jason DesJardins, James Lameroux and Shannon Green.

The set design is simply outstanding, taking up much of the stage space. The show also has many technical elements which are performed with great precision.

However, a major contributing factor to the shows expansive three hour run time was an average two minute per set change as there are a lot of set changes in the show. If the Wormwood family set had been on wagons it might have helped reduce that run time.

Under the music direction of John Tomasi, the principals and ensemble execute the songs quite well, but the use of the unforgiving beast of recorded orchestra music left many moments simply “hanging.” There were numerous awkward “gaps” in the automated score which forced the actors into occasionally waiting for the recording to “catch up” so they could continue with their next line of dialogue or required action.

Costumes were all absolutely appropriate to the bizarre, uber-cartoonish characters and school surroundings.

In the end, though, it is still Coviello as Matilda who is the very best reason to see this show as she serves as the catalyst making everything else gel so well.