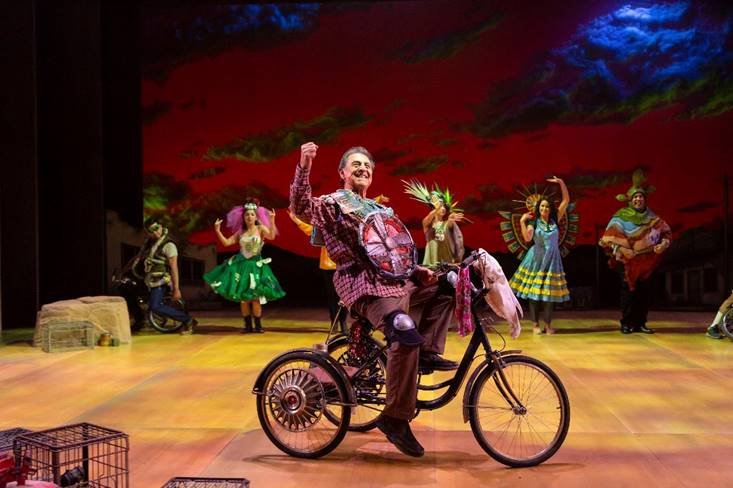 BOSTON: “Quixote Nuevo” by Octavio Solis. Presented by Huntington Theatre Company, at the Avenue of the Arts, Huntington Avenue Theatre, 264 Huntington Avenue, Boston, MA. Performances: Nov. 21 through Dec. 8. Select Evenings: Tues. – Thurs. at 7:30pm; Fri. – Sat. at 8:00pm; select Sun. at 7:00pm Matinees: Select Wed., Sat., and Sun. at 2:00pm. Tickets: Single tickets starting at $25 and FlexPasses are on sale online at huntingtontheatre.org or by phone at 617 266 0800 or in person at the Huntington Avenue Theatre Box Office or Calderwood Pavilion at the BCA Box Office, 527 Tremont St. in Boston’s South End.

Emilio Delgado (Jose Quijano, aka “Don Quixote”) may never truly shake the iconic “Sesame Street” character (‘Luis”) for which he is most identified, having played it for 44 years. Possibly, he may not even want to as it was a role that was part of an acting ensemble that helped to entertain and engage an entire generation.

However, with a new acting ensemble that also helps to engage and entertain, his veritable virtuoso performance in “Quixote Nuevo” certainly is the purest example of the definition of consummate characterization.

He was 100 percent truthful in his portrayal of a man, Quijano, aware that he is suffering from dementia, facing his own mortality and, afraid of being sent to an assisted living center, runs away from home.

As his family, priest and therapist all engage in a frantic search for Quijano, we not only accompany him during his physical odyssey, but also during the unfolding odyssey of his mind.

It is an immediately absorbing performance. From the moment Delgado takes the stage, his humor and nobility are so infectious, we are immediately rooting for him, vicariously joining him in his odyssey which ultimately takes him to the illegal immigration border wall in La Plancha, Texas.

While using a lot of Spanish, one does not need to understand every word spoken to understand the depth of what is being said. One man, facing the end of his life, inspires others to fully live out theirs.

In the original Don Quixote story by Miguel de Cervantes from the 1600s, a “man from La Mancha” has read so many chivalrous romances that he has lost his mind and believes himself a “caballero andante” or the knight on a mission “Don Quixote de la Mancha.”

In this updated variation by Octavio Solis, Quijano is a former professor of literature who, suffering from the effects of Alzheimer’s, believes himself to be “Don Quixote.”

Instead of seeing the world for what it is, Quijano imagines he is the noble knight setting out on a sacred quest and will not yield his mind and body to death until that quest has been completed.

Not only does he have us pulling for him, for the most part, everyone he meets also begins to buy into his hallucinatory shenanigans. Donned in assorted garbage he has stolen along the way, he wanders into a local border dive bar and is observed by the staff and patrons as a lunatic.

At first, they ridicule him, but then, as they get to know him and, sensing the sincerity of his beliefs, they begin to accept, embrace and even encourage the absurdity of his claims.

Quijano, as “Quixote,” wanders along the border wall with his sidekick, ice cream vendor Manny, aka “Sancho” (Juan Manuel Amador). Manny, who knows of the dementia, still stands by Quijano, as he seeks out to “vanquish all foes” that stand between him and his beloved “Dulcinea” (appearing as a vision, a memory from Quijano’s past).

Amador’s performance stands toe to toe with Delgado's with an amiable, quirky charm on stage. As the play progresses, the literal wall along which the two men journey becomes more of a metaphor for a number of emotional obstacles, or “walls,” that exist in their real lives.

Here is a clip from when the show was performed in Hartford:

Gisela Chipe portrays the “Dulcinea” vision and also as Quijano’s therapist, Dr. Campos. Most within the cast play multiple roles and make the changes usually with split second precision.

Under the direction of KC Sanchez, there is not one second of wasted time on stage and the scenes flow seamlessly.

While not technically a musical, there is a lot of music used in the production and, under the music direction by Jesse Sanchez and with a score by David R, Molina and Eduardo Robledo, the music perfectly punctuates the mood and dynamic of each scene.

The music blends Tejano, Mariachi, Banda and other Mexican and “Border” music, both north and south and provides all the characters with an associated “theme” as they enter into a scene.

There was also a high level of technical acuity thanks to the lighting design by Brian J. Lilienthal and sound design by David R. Molina.

While a prominent “dead zone” center stage caused some dialogue to virtually be lost (especially, unfortunately, an otherwise wonderfully poignant monologue by Orlando Arriaga as a border refugee who has lost his entire family), “Quixote Nuevo” is still a magnificently orchestrated show with engaging performances and equally engaging creative choices.

The show runs approximately 2 hours and 40 minutes with one intermission.