(Cover Photo: Members of the CAST of "OUT OF ORDER" from the Gateway Players in Southbridge, MA. through October 16, 2022. Photo Courtesy Gateway Players)

"All my friends call me Dickie."

All performances will be held at the Fellowship Hall of Elm Street Congregational Church, 61 Elm Street in Southbridge.

Parking is available on Elm Street, or in the parking deck behind the Southbridge Town Hall.

Presented by permission through special arrangement with Concord Theatricals.

Ray Cooney's "OUT OF ORDER" is an extremely clever British comedy which is being presented by Gateway Players Theatre of Southbridge.

Under the direction of Carol Hayes, the bulk of the performances are steady and, together, the ensemble delivers a fun, solid piece.

The single set comedy, set in a hotel room at London's Westminster Hotel, has very little downtime with even less time for any set redressing. This aided immensely in moving things along with the already very costume-heavy and prop-heavy show.

The set design by Cynthia Keane is fully functional and consists of an "unruly" hotel room window pane which figures critically into the show's plot of a married Member of British Parliament, Richard Willey (John Kennedy) who has come to the Westminster for a tryst with Jane (Abby Duell), personal secretary for one of his opposition.

When a detective (Bill Haggerty) is found and presumed dead in the window by Richard and Jane, they try to cover it up as the man's death could expose their intended (if not consummated) affair. 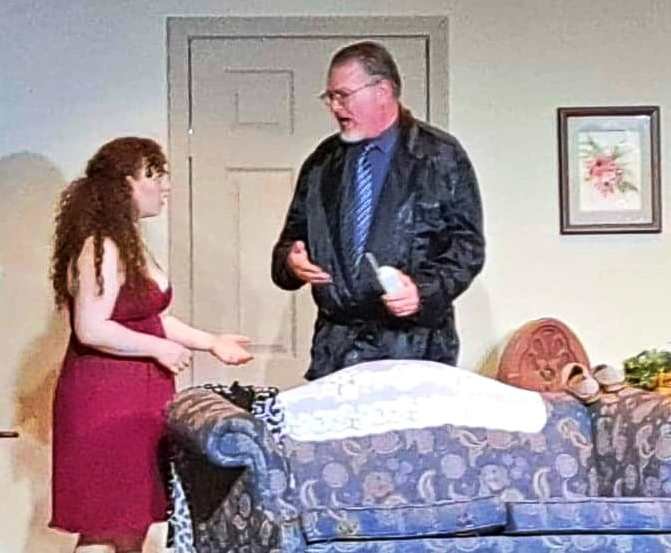 (Photo: Abby Duell and John Kennedy in a scene from "OUT OF ORDER" from the Gateway Players in Southbridge, MA. through October 16, 2022. Photo Courtesy Gateway Players)

Bodies are hidden, disguised, moved about in absurd fashion, all part and parcel to fine physical farce and, to be sure, "OUT OF ORDER" is one fine farce.

For, if not for Richard's selfish and amoral behavior, what might have resulted would simply be routine, expected consequences of his liaison with Jane.

Instead, his saga descends into a whirlpool of lies which is a result of the absurd lengths Richard (aka "Dickie") takes to evade those consequences.

Investigating the reported sighting of a man (the detective) entering into the Westminster through a hotel window, Westminster manager (Patrick Bracken) periodically seems to arrive on the scene at the worst possible moments, occasionally finding some of the above folks involved in more than a few compromising situations.

Making a bundle by protecting Richard and George from their spiraling descent which is the abyss of their lies is Westminster waiter (Billy Bolster) who might make enough just in tips by the end of the night to buy the Westminster.

There is almost an entertaining "silent film" quality to the material in that silent reactions, occasionally, speak volumes more than actual physical actions taking place. That said, there is a lot of physical comedy here and the cast delivers consistently entertaining performances.

Cooney's witty dialogue has an obvious rhythm to it (sometimes resembling that of television comedies "Frasier" or "Fawlty Towers"). The overall pacing of the two-act farce as presented here seems to be half of what it should be.

Cooney's dialogue pacing seems to require more of a "rapid-fire" delivery which, with the exception of Koch, does not really happen. The physical comedy, however, is handled very well, delivering more than a few laughs.

Gateway Players Theatre of Southbridge presents “OUT OF ORDER" by Ray Cooney.

This production will be directed by Carol Hayes, and produced by Barbara Day.

A junior UK Member of Parliament, Richard Willey, is a married man, who has to lie his way out of an embarrassing situation, namely a planned adultery with Jane Worthington, the personal secretary of an opposition MP.

With the assistance of an innocent sidekick (in this case the minister’s personal private secretary), the duo gets more and more embroiled in the increasingly tangled tale improvised by Richard Willey as events unfold.

The action takes place in a suite in a posh London hotel and revolves around accidents caused by a defective sash window and a body in a wardrobe.