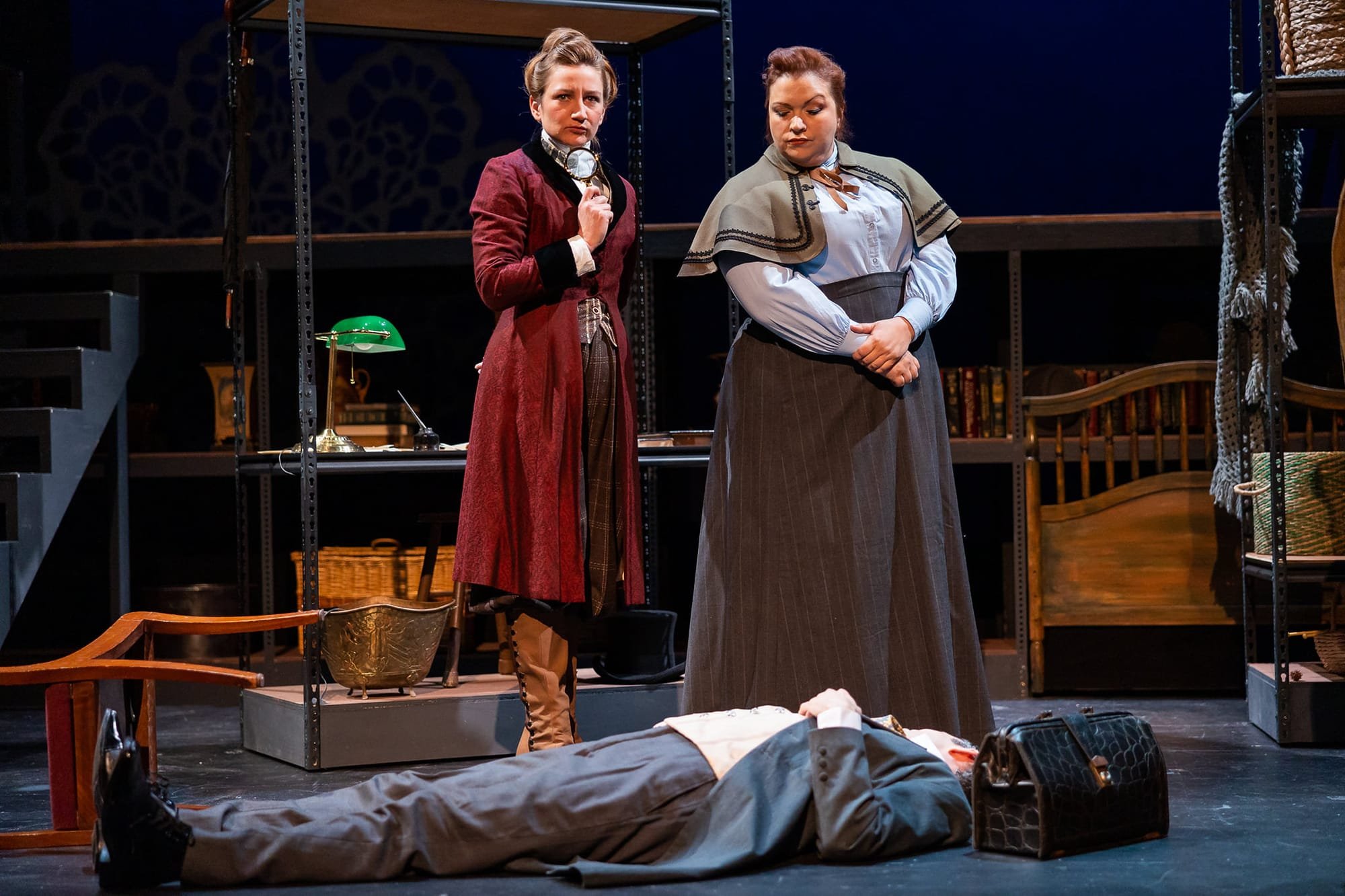 "A tale with a Holmespun twist"

Based on Characters by Sir Arthur Conan Doyle

^Member of United Scenic Artists, Local USA 829 of the IATSE.

While some may not initially accept "Miss Holmes Returns" with a female "Sherlock" (Marge Dunn)  and "Dr. Watson" (Shonna Cirone) those people shouldn't miss out on two fabulous performances and an overall production that is 100 percent "Sherlock Holmes."

Written by Christopher M. Walsh and under the capable direction of Weylin Symes, the production contains many of the familiar characters one might expect from a stage adaptation:

We have Sherlock's combative brother, Mycroft (Alexander Platt), the well-meaning Scotland Yard detective Lestrade (Joshua Wolf Coleman) and others who make themselves known as the story unfolds.

All the performances are exemplary but it is Dunn who leads the way and surpasses all possible expectations.

Playing down the "gender-bending" concept for a moment - Dunn IS "Sherlock Holmes" - thoroughly embodying the character with everything any Holmes fan (especially this one) would (or should) want from an acting portrayal of the legendary detective.

Cirone, similarly, brings the expected element of companionship. Watson is more than a supportive partner or friend to Holmes. Watson "completes" Holmes, providing that human side, that emotional half of Holmes which has been either long suppressed or never engaged.

This characterization of Dr. Dorothy Watson by both Walsh's script and Cirone's performance honors any previous portrayal.

In 2018, Greater Boston Stage Company staged the play's predecessor, "Miss Holmes" and now present the sequel. Announced at this performance, the playwright was in attendance.

The mystery this time, for Holmes and Watson, involves a young woman named Priya (Shubhangi Kuchibhotla) who finds herself desperate, on the run and accused of murder. 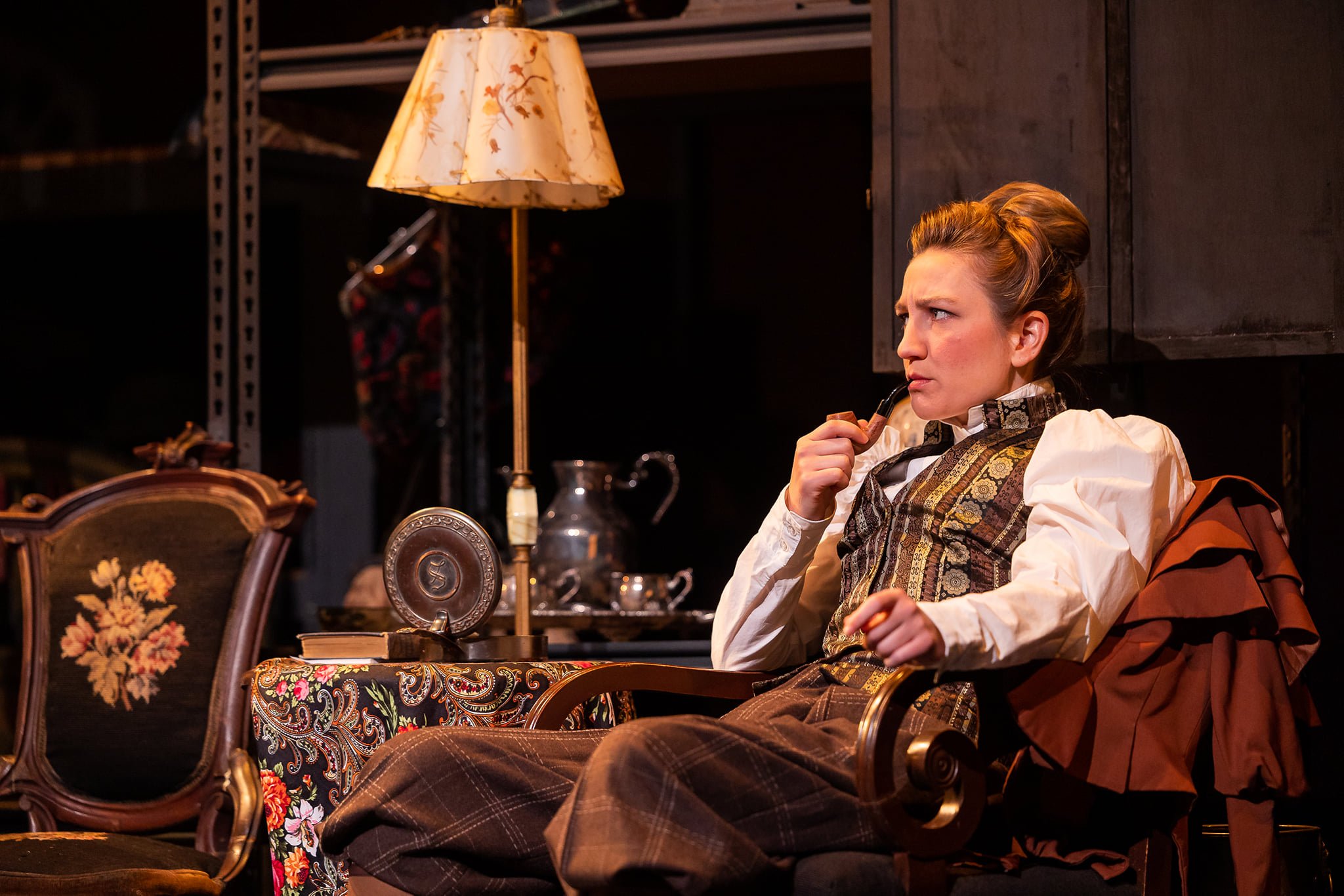 An important sub-plot deals with a bill being submitted to repeal an unjust law, one that targets all women in London while in the guise of being in the best public interest and health.

It is a law purported to target prostitutes who might be carrying sexually transmitted diseases.

However, this same law could detain or imprison any innocent women, without warrant, without just cause, ultimately turning them into victims of the oppressive and biased law.

What seems to confound Holmes most with the above is just how this vital bill connects to the case...or to her, personally.

As she and Dr. Watson continue to pursue the many clues of the case, while simultaneously continuing to challenge the societal norms of the day, all soon becomes clear...albeit with some shocks, surprises and casualties along the way.

The mystery also connects Holmes with a young "tutor" named Daniel Worthington (Paul Melendy) who, as Sherlock investigates, expresses a "personal interest" in Holmes - which Watson finds amusing, especially when another man also expresses a similar attraction to the brilliant but otherwise romantically oblivious detective.

Melendy is simply astounding to watch as he navigates an extremely complex and transformative character who stirs heretofore dormant emotions within Holmes that she is not sure how to engage. This "budding" relationship is probably the best component within Walsh's script. 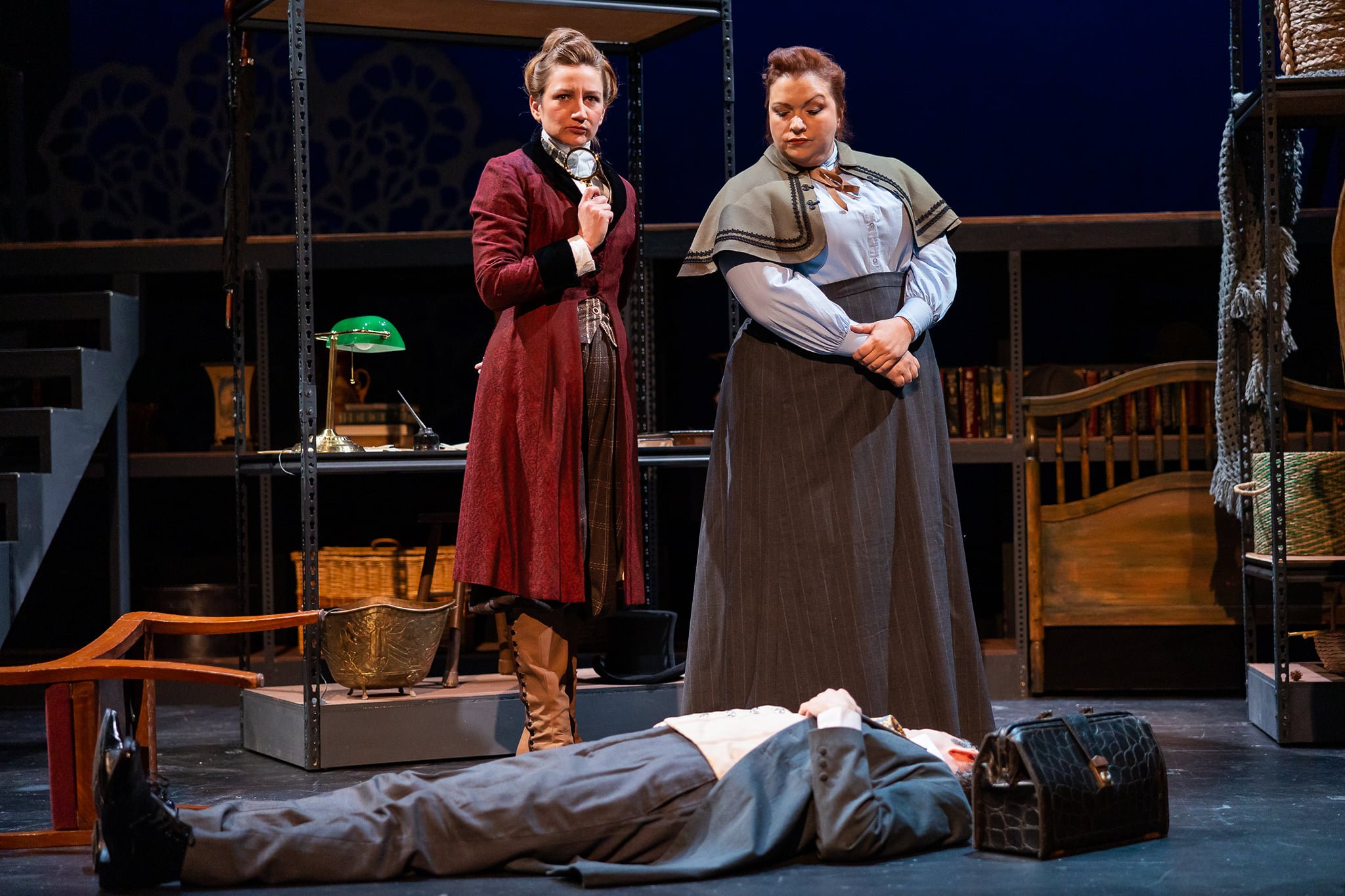 The set is minimalist with the use of metal shelving to serve in multi-faceted ways. A clever device, it serves the production well in keeping the pace and scene changes fluid. That said, it could have been detailed a little more to look less like the production was being staged in dad's workshop in the garage.

A charming and lighthearted element added to the story is the inclusion of a "Sewing Circle" made up of female "operatives" who aid Holmes in the search for the fugitive Priya.

The overall pacing of Walsh's meticulous dialogue was kept brisk and to the point, but occasionally some of the dialogue got lost in the wings if actors were positioned with their heads either facing stage left or right. A minor complaint for an otherwise top notch production.

Here's hoping to a future filled with more entries in this charming series. 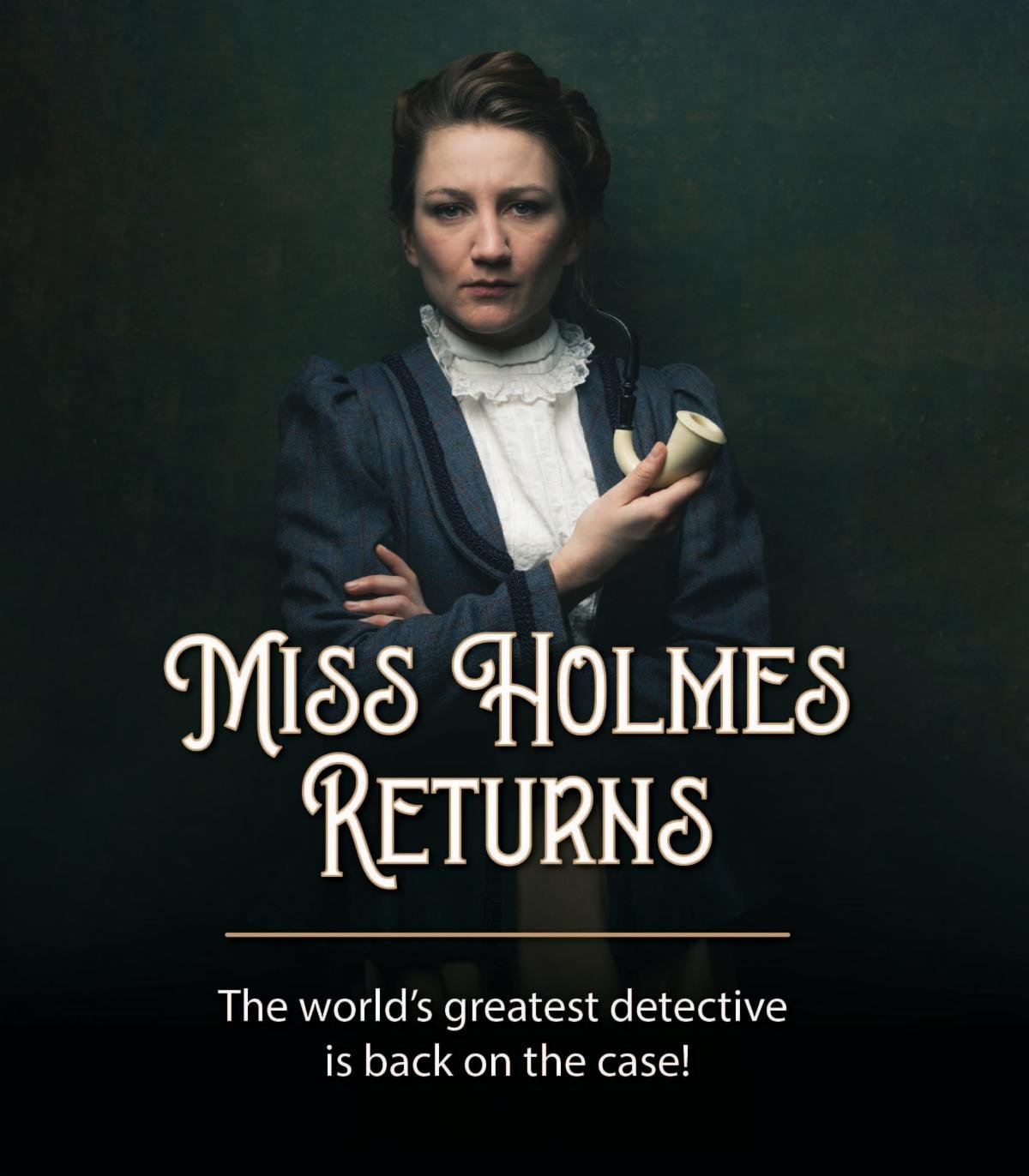 Sherlock and Watson are back on the case!

﻿In this riveting follow-up to our 2018 smash hit Miss Holmes, a nurse and activist finds herself on the run, wanted for murder.

Pursued by authorities and by sinister figures from the shadowy criminal underworld, she turns to the unstoppable crime-fighting duo Miss Sherlock Holmes and Dr. Dorothy Watson for help.

Whether you're a returning fan or new to the Miss Holmes saga, this story of mystery, betrayal, and social justice will keep you on the edge of your seat.

Masks are required for all visitors, as well as proof of vaccination or a negative COVID-19 test within 72 hours.  Learn more.  Enjoy the show!

Subscribers get priority seating, lowest prices, concert and event discounts, 2-for-1 discounts at over 30 theatres in New England, and more! 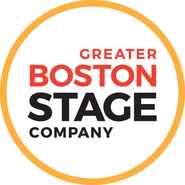