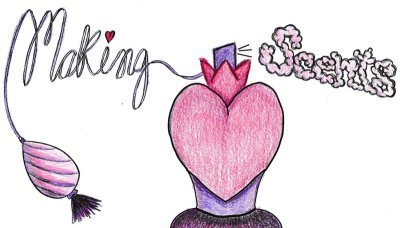 Vanilla Box has fun with some musical non-scents

The latest Vanilla Box production of the Stephen Murray musical "Making Scents" entertains by taking a simple idea about love and turning it into a nice little Valentine.

“Little” is the key word here as Murray’s show is a nice little story that is presented on a large stage and that is the only real drawback, as the show about mortals visited by an ancient Greek god and goddess tends to be lost on (by comparison) the seemingly vast Holy Name stage.

The book, music and lyrics are by Murray with additional book material contributed by William Lipscomb.

Under the competent direction of Joel Seger, and choreographed equally as well by Christine C. Seger, the two-act musical centers on the “Goddess of Love Fragrance Company (GOLFCO)” which is desperate to corner the market by launching a new fragrance on Valentine’s Day.

GOLFCO’s President, Mona St. Pierre (Tracy Martino), commands her staff of fragrance scientists to create a new love potion that will make her business associate Warren (Michael Quitadamo) fall in love with her.

Meanwhile, goddess Aphrodite (Nicole Lian) has reluctantly allowed her son, Eros (Robert Herstedt) to come down and cause some mischief as he assumes the role of a mortal “mail room boy” for Mona.

When Eros falls in love with Psyche (Heidi Choe) it irritates Aphrodite who, during the show’s Act One closer, “A Little Push / What’s that Smell?” casts a magic spell, causing everyone in the office to fall in love with the wrong people.

Herstedt is the primary reason to see “Making Scents” as he has a tremendous grasp of the character of Eros and seems to really enjoy playing the character, enthusiastically utilizing the entire space of the stage.

If more of the cast could have exuded some of the same unbridled enthusiasm as Herstedt, the show could only have been better. As it was, a majority of the performances were still capable, at least.

Not that the show is without merit. In fact, the story is solid and many of Murray’s tunes are quite enjoyable. Standout numbers included the cleverly staged, peppy group number “Rich, Tall and Nice” sung by Choe with Psyche’s office mates Danny (Ian Flannery), Peter (Steve Pinner) and Rhonda (Paula Guilbault).

Guibault, as the acerbic Rhonda, delivers some of the funniest zingers in the show and sings, without question, Murray’s finest, most intimate ballad in the show, “Little Grey Cloud.”

Again, the only issue here was in regards to the enactment of the song on such a large stage. If Guibault had been brought forward to the front of the stage to deliver the bulk of her song, it would have provided and even larger impact. As it was, it was still a strong performance, but a bit of the intimacy was lost as she was relegated to the rear of the outsized space.

There were times when the musical didn’t seem to know if it was a small show on a large stage or, with some of the wagons used, a large show on a small stage. During the second act opener, “Love Waltz,” much of the actors were crammed over on stage right for at least ten minutes while, on stage left, there was enormous unused space.

Under the music direction of John Leslie, a majority of the group numbers are well executed by the cast of nine performers. Murray, himself, plays piano in the pit for the show.

However, the show’s opener, “Making Dollars, Making Scents” had some noticeable pitch issues as it seemed the cast had difficulty hearing the musicians. As the evening progressed, this improved greatly.

For the score, Murray samples a wonderfully eclectic mix of composers as you can clearly hear a strong influence of “Hernando’s Hideaway” in his song, “Opposites Attract” and, with other tunes, one can feel moderate influence of composers Dave Brubeck, Harry Nilsson and others.

Costumes were appropriate and the color coordination was impeccable. There were some minor lighting and sound glitches but, overall, the Vanilla Box players provide a fun evening of lighthearted musical entertainment.