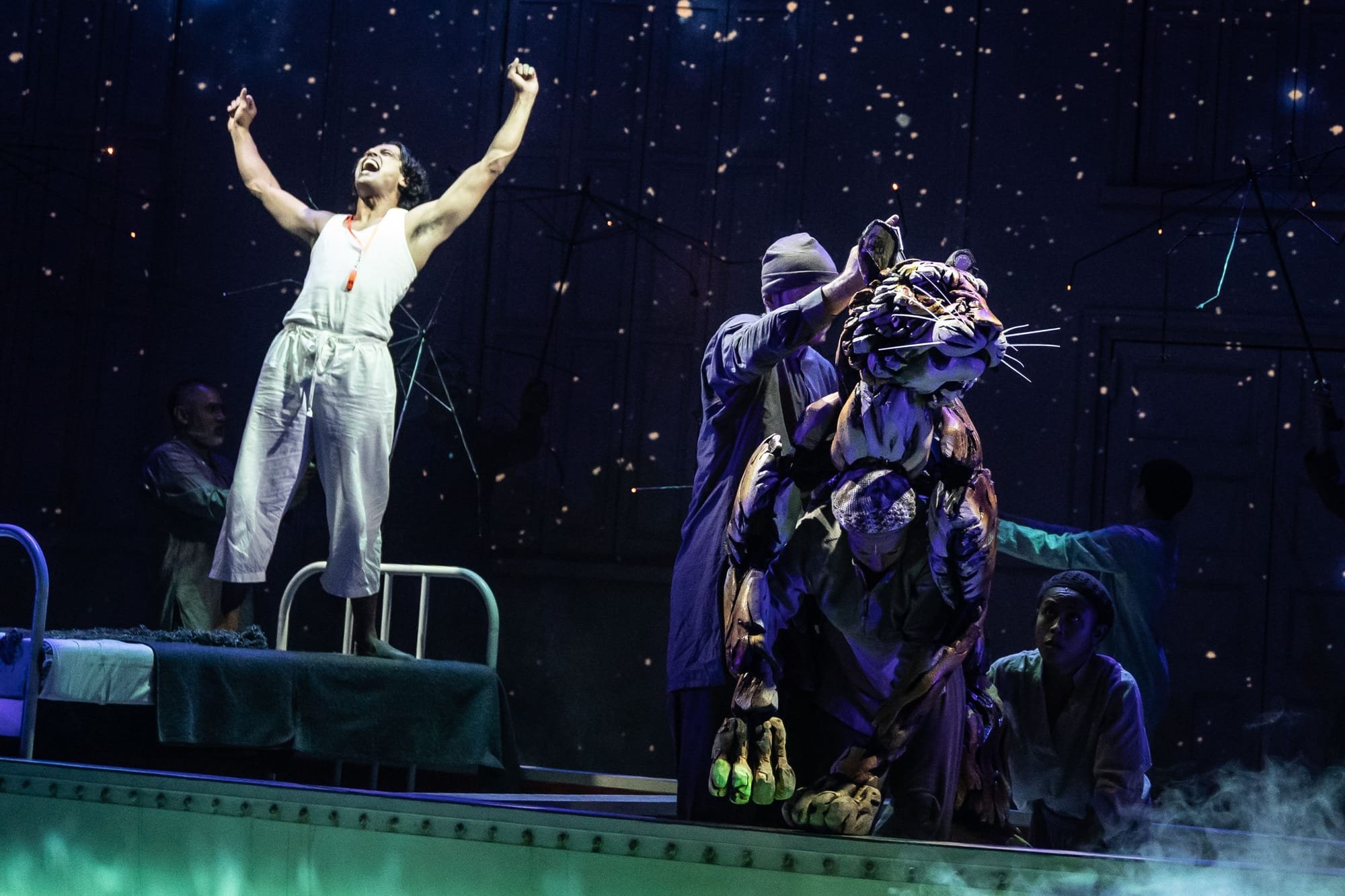 Based on the best-selling novel by Yann Martell

The American Repertory Theater (A.R.T.) presents the visual spectacle "LIFE OF PI" and, truly, the production is a magnificent, fantastic kaleidoscope of colors and a phantasmagoria of breathtaking images- truly visceral storytelling at its finest.

Winner of five 2022 Olivier Awards including Best New Play, the ads one might have seen for "LIFE OF PI" simply do not do this staging justice.

Yes, there is puppetry reminiscent of Broadway's "The Lion King" but that is where the similarities between the two shows ends and where the additional creativity involved in this production begins.

There are also definitely some not so family-friendly "Circle of Life" moments that Disney was afraid to elaborate on that "LIFE OF PI" fully explores here. So, any young children coming to see the show should come well informed.

Written by Lolita Chakrabarti, "LIFE OF PI" is based on the best-selling novel by Yann Martell.

The A.R.T. production is ably directed by Max Webster.

Adi Dixit (Pi) is a teenager living in India. Pi's family operates a zoo but, due to growing unrest, Pi and his family set sail aboard a cargo ship to emigrate from India to Canada along with a cargo hold of animals from the zoo.

At first glance, Dixit might appear a little unconvincing as a teenager. However, that belief is ultimately suspended as the talented Dixit, as "Pi," commands the stage for much of the show. 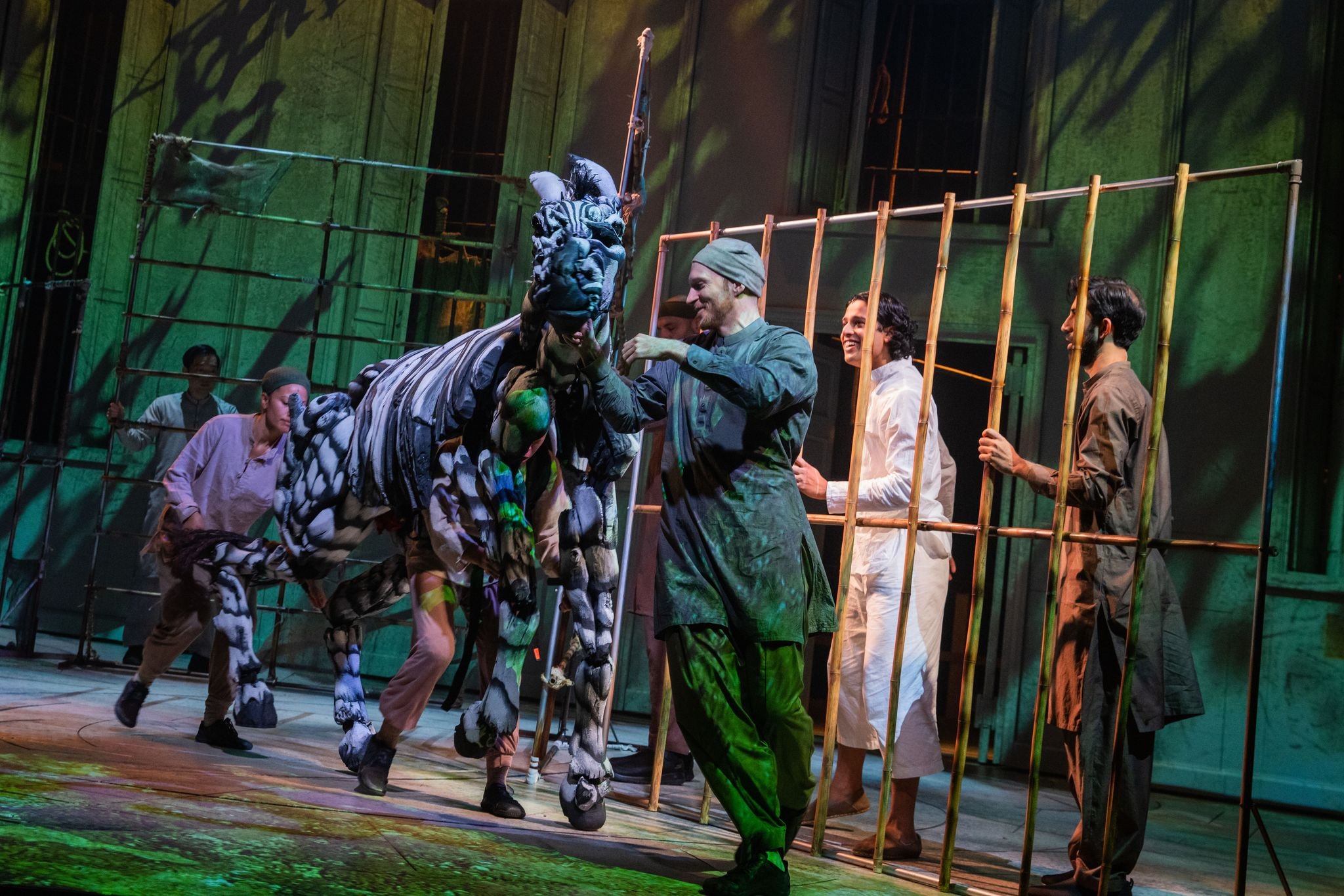 The ship sinks in the middle of the Pacific Ocean and Pi is left stranded on a lifeboat with just four other "survivors."

Months later, Pi recounts the tale of his miraculous survival to Lulu Chen (Kirstin Louie) and insurance investigator, Mr. Okamoto (Daisuke Tsuji). However, they are skeptical as Pi recalls the additional "passengers" in his lifeboat: a hyena, a zebra, an orangutan, and a Royal Bengal tiger.

All were animals from Pi's family's zoo which escaped on board the ship and, somehow, made it into the water and climbed onto Pi's lifeboat.

The puppetry used to facilitate the imagery of the animals is flawlessly performed. The additional technical wizardry used for the scenes in the lifeboat absolutely raises the bar and redefines the concept of stage inventiveness.

As the animals proceed to prey on one another, Pi struggles to survive until he and the tiger (mis-named “Richard Parker” due to a clerical mistake) seem to reach an impasse in the middle of the ocean. The staggering number of special effects in "LIFE OF PI" do not overwhelm and are not used just for show. All effects are extremely well-utilized and punctuate exactly where needed to punctuate.

Yet, even after members of Pi's family meet their tragic fate, they continue to "help" Pi recount his tale of endurance, heroism and personal sacrifice in order to stay alive, as do other phantoms from the recesses of Pi's mind.

The entire ensemble is vital and contribute greatly to the overall success of the show.

Again, nothing is used simply to dazzle our eyes - which "LIFE OF PI" does - there is a purpose to everything and the story, as it unfolds, keeps us riveted to the edge of our seats. 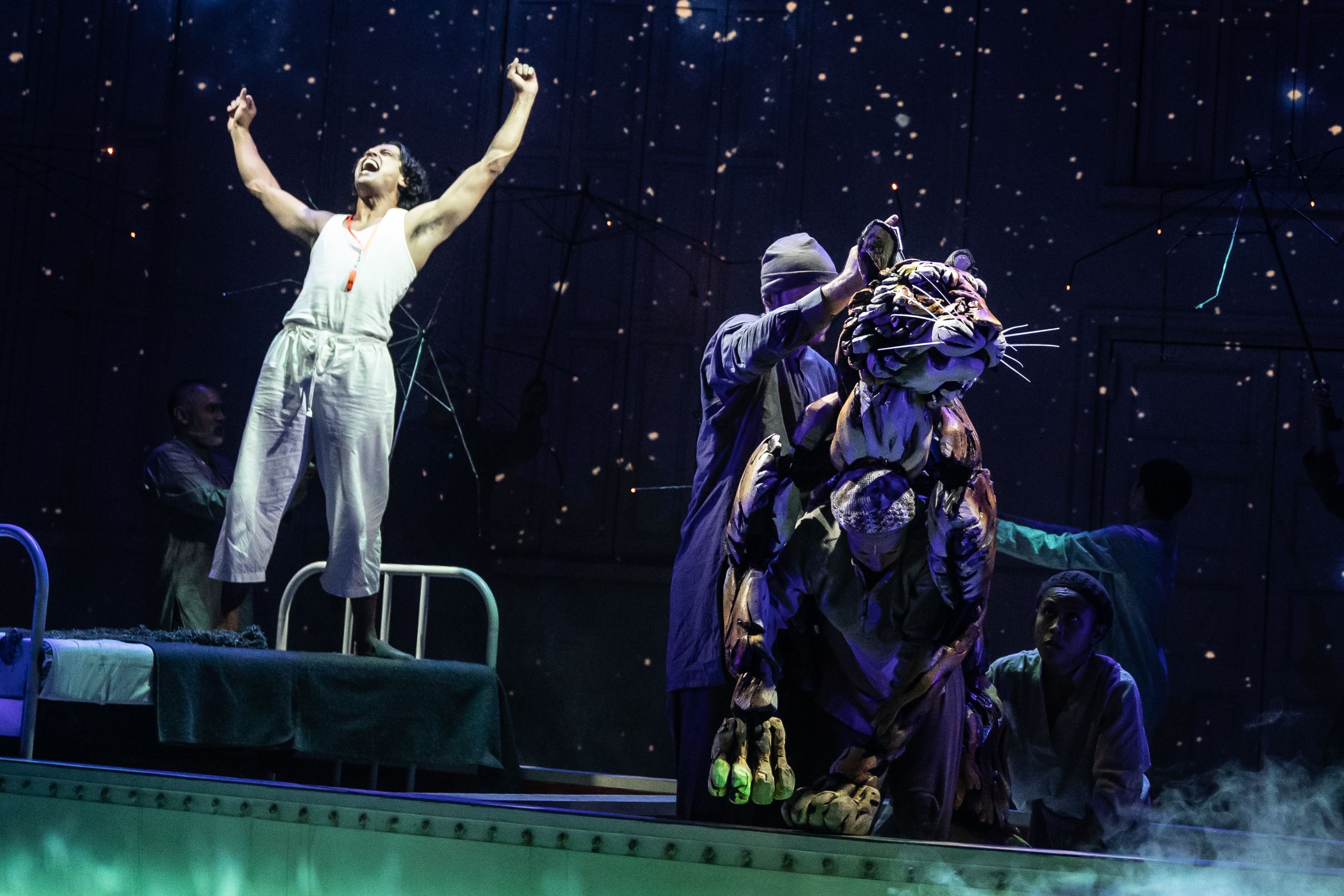 Praise must be given in spades to the entire creative team:

From the puppetry and inventive movement direction by Finn Caldwell, video design by Andrzej Goulding, lighting design by Tim Lutkin, sound design by Carolyn Dowling, to the scenic and costume design by Tim Hatley - as used in combination, and with flawless execution by the ensemble, these technical elements are all simply superb.

Original music by Andrew T. Mackay almost gives the impression "LIFE OF PI" should have unfolded as a musical.

There were many moments in the first act which came to a "stop" which might easily have translated well into musical format.

However, the overall content of the story itself does not really lend itself as such, especially in the last quarter of the production which explores significantly darker areas not really conducive to musical fare.

"LIFE OF PI" must close at A.R.T. Sunday, January 29, 2023. It will begin performances at Broadway’s Gerald Schoenfeld Theatre in March of 2023.

Whether you see it here or when it ultimately hits the Broadway stage, it is highly recommended everyone experience the attack on all senses and exhilarating tale that is the "LIFE OF PI." 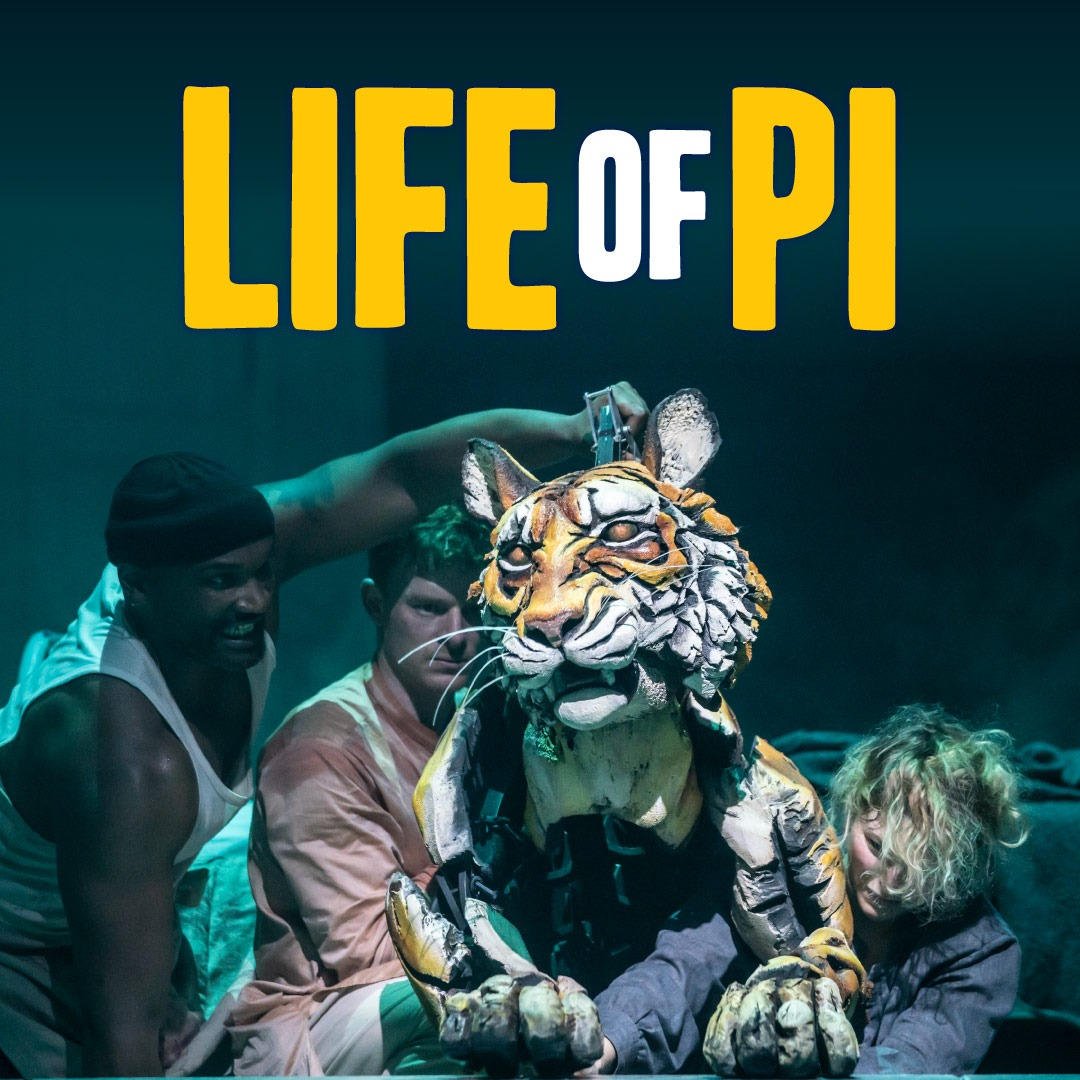 Sixteen-year-old PI and his family set off to emigrate from India, but after their ship sinks in the middle of the Pacific Ocean, Pi is left stranded on a lifeboat with just four other survivors—a hyena, a zebra, an orangutan, and a Royal Bengal tiger.

Time is against them, nature is harsh, who will survive?

Called “extraordinary and unmissable” by The Guardian for its inventive puppetry and winner of five 2022 Olivier Awards including Best New Play, this highly imaginative theatrical adaptation brings one of the most beloved works of fiction to the stage to tell its epic story of endurance and hope. 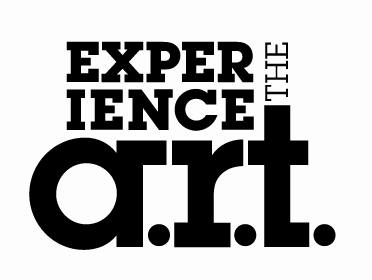 ABOUT THE AMERICAN REPERTORY THEATER

The American Repertory Theater at Harvard University is dedicated to expanding the boundaries of theater, always including the audience as a partner.

We focus on the research and development of groundbreaking theatrical experiences that catalyze dialogue and transformation. We believe that by engaging our hearts, minds, and bodies, theater has the power to heal and imagine collective pathways forward. We commit to advancing public health in our practice and our programming, recognizing that racism in America is a national public health crisis. Our new home in Allston will be a breathable and healthy building envisioned as a town hall for the twenty-first century. Inspired by the model of a teaching hospital, the building will be a vibrant center for research, experiential pedagogy, and performance. We build community with our audiences, artists, students, staff, and neighbors across Greater Boston, embracing theater’s power to cultivate the full breadth and beauty of our shared humanity. We affirm and celebrate a multitude of perspectives and experiences that reflect the diversity of our country and world. We are dedicated to making a welcoming and accessible space for people of any identity, background, or ability.

We hold the institution and each other responsible and accountable for living our shared values. There is no hierarchy to these values; they are all equally important and interrelated. We acknowledge that as an institution we must devote time to implementing and sustaining these values:

Habituate anti-racist practices in our policies, structure, and culture

We lead with inquiry

We believe in collaboration

Work together with trust and respect to unlock collective creativity

Challenge assumptions and create capacity to support “next” practices

Promote the health and vitality of our planet, our organization, and each other