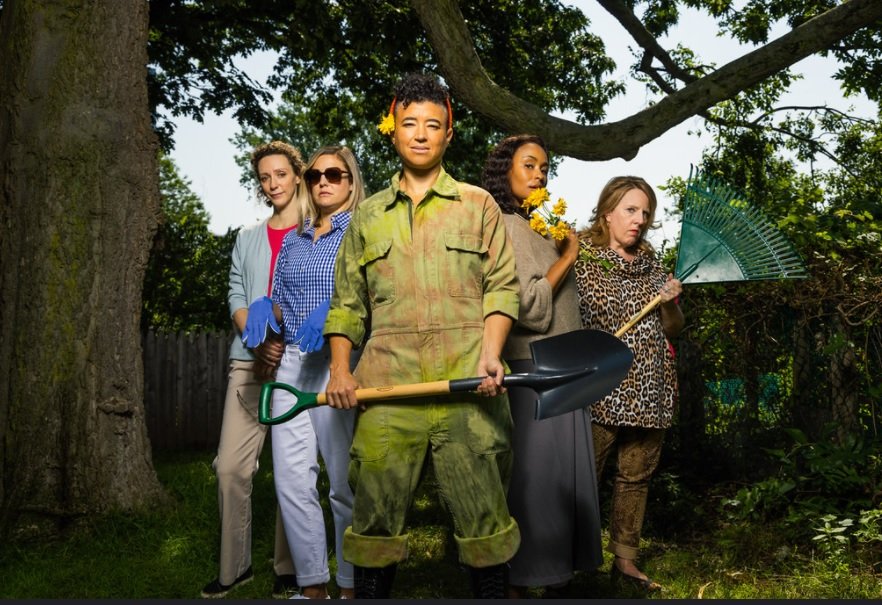 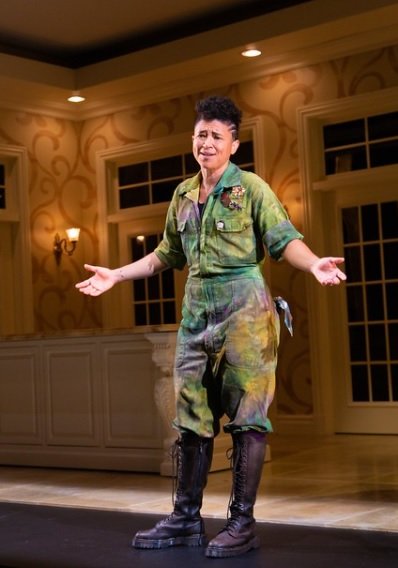 (Rami Margron as "Diane" aka the Greek god of the grape-harvest, Dionysus. Photo courtesy of T Charles Erickson)

BOSTON, MA. - After theatres and audiences have spent so long in separated hibernations, the Huntington Theatre Company offers up a comedy about global survival in the guise of a lesbian-themed "Witches of Eastwick" meets "An Inconvenient Truth" to bring us back together and it is a welcome if not always successful experience.

"Hurricane Diane" is a 90-minute one-act comedy (with no intermission) steeped in Greek mythology but landing full force on a modern-day 'click' of suburban women living on the same cul-de-sac in a small New Jersey "Pleasant Valley Sunday"-styled community .

In this community, however, the houses of the four housewives in question are literally the same, although not in "rows" as the Carole King song suggests. The simple but clever set design of six sets of unified French doors with a movable kitchen island center allows to serve with great ease as the set for each of the women.

The women seek to revitalize their respective gardens and, one by one, meet up with a unique "gardener" who is, in fact, the Greek god of the grape-harvest, Dionysus (Rami Margron).

Breaking the fourth wall, the contemporary Dionysus or "Diane",  introduces herself to the audience and assumes the guise of a strong-willed lesbian gardener.

From the moment she takes the stage, Margron is dominating with an extremely vivacious presence. Much like the characters she seduces in the show, we tend to miss her when she is not around. 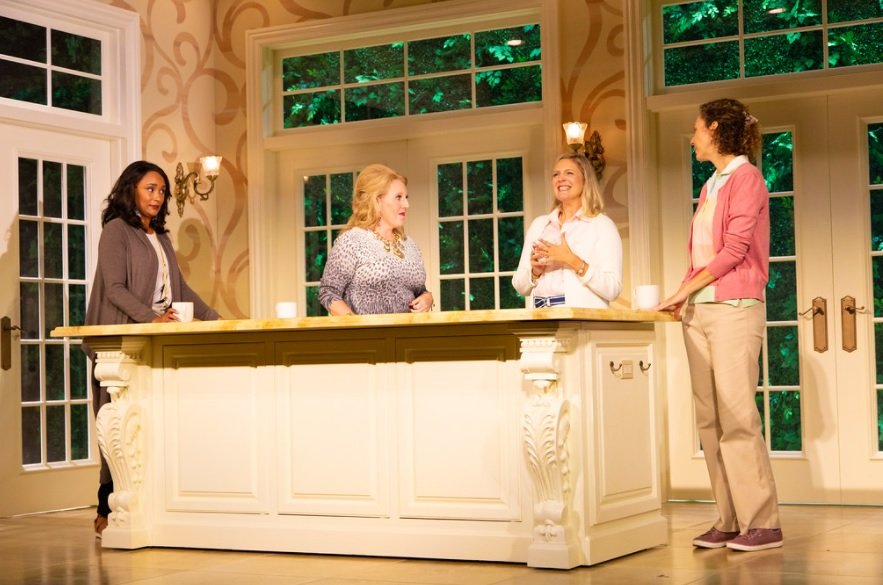 Wither her positive attitude and quirky demeanor, Esme Allen is dynamic as housewife "Carol" who is charmed by Diane at first. However, Carol then becomes increasingly aware of Diane's more ulterior motives and hidden agenda, which is to seduce her and her friends and release the 'latent lesbian' suppressed deep (although deeper in some than others) within each of them.

And that is exactly what Diane does, one by one, friend by friend, housewife by housewife, neighbor by neighbor. She "consumes" their will by bringing to the surface that which they desire most.

Abandoned housewife Beth (Marianna Bassham) is the first to "fall" - succumbing to the will of Diane. Bassham is committed to the character and disappears far too early in the show. She seemingly reveals more levels to Beth than what appears to exist in the other characters. This either might be something intentionally underdeveloped in Madeleine George's script or, perhaps, it is more a tribute to Bassham's own character development.

Renee (Kris Sidberry) is an ambitious executive at HGTV Magazine but already seems mentally in tune with many of Diane's radical concepts and is, surprisingly, more quickly "consumed" by Diane's sheer force of will. Sidberry has a strong charismatic presence and brings Renee both a power of conviction and graceful elegance.

The rowdy housewife Pam Annunziata (Jennifer Bubriski) seems like a caricature leftover from the show "Jersey Shore" but it is Bubriski who easily delivers probably the biggest laughs in the show, although she, too, seems quite easily "converted" by Diane.

The climate culture overtones that permeate throughout the script seem less sincere, at times, and more serve as just a vehicle to bring forth the seduction of each of the women by Diane.

That is, UNTIL the very end of the show, which admittedly meanders a bit too long, but does eventually bring forth the "eye" of the storm and we understand the message with gale winds and great force.

Truly a wonderful show to kick off the 2021-2022 season at the Huntington and may they continue to weather these trying times.

Show runs approximately 90 Minutes with no intermission.
Kevin T. Baldwin is a member of the American Theatre Critics Association (ATCA)

For the safety and comfort of all who attend our shows, all patrons must present either proof of vaccination or negative COVID-19 test in order to enter the theatre. Learn more.

All tickets come with digital insurance. If you ever feel as if you would rather not see Hurricane Diane in person — for any reason — you can easily exchange your tickets into a specially recorded version of this play. OR, you can purchase tickets to the digital version of Hurricane Diane now.

The Huntington Theatre Company is Boston’s leading professional theatre and one of the region’s premier cultural assets since its founding in 1982. Recipient of the 2013 Regional Theatre Tony Award, the Huntington brings together superb local and national talent and produces a mix of groundbreaking new works and classics made current to create award-winning productions. The Huntington runs nationally renowned programs in education and new play development and serves the local theatre community through its operation of the Calderwood Pavilion at the BCA. The Huntington has long been an anchor cultural institution of Huntington Avenue, the Avenue of the Arts, and will remain so on a permanent basis with plans to convert the Huntington Avenue Theatre into a first-rate, modern venue with expanded services to audiences, artists, and the community. The Huntington cultivates, celebrates, and champions theatre as an art form. For more information, visit huntingtontheatre.org.