“Every Christmas Story Ever Told (And Then Some)” - Stageloft Repertory Theater 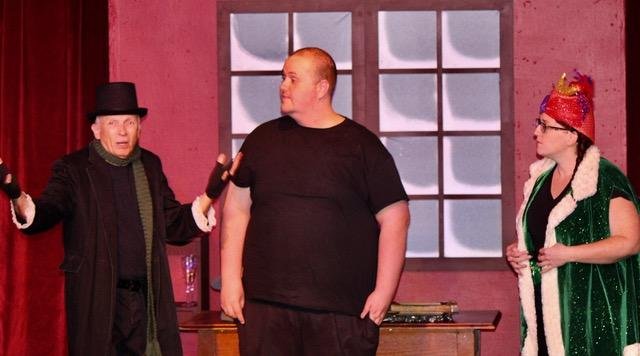 Stageloft Repertory Theater literally performs “Every Christmas Story Ever Told (And Then Some) taking the audience on a wild journey highlighting shows of the holiday season.

Actually, they don’t. They don’t even come close to performing them all. But that is totally okay because they don't have to. What they do cover in this send up of annual yuletide shows is plenty funny as is.

The trio of actors (Dave Clark, Joshua Raymond and Robyn Spain) lampoon the “Dickens” out of yuletide staples, taking on “It’s a Wonderful Life,” “The Grinch Who Stole Christmas,” “Christmas Carol,” “Nutcracker,” “Miracle on 34th Street,” and more.

The premise (what there is of a premise) is that two of the three actors, Raymond and Spain, work together to try and convince the third actor, Clark, to forgo performing the same thing for the hundredth time, "A Christmas Carol."

To accomplish this, the three set out to perform “Every Christmas Story Ever Told" at breakneck speed.

Actually, they don’t. They don’t even come close to breakneck speed, whatever that actually might be. But, that is totally okay because they do move quickly enough through their loving homage to holiday classics that includes animated shows such as “Rudolph,” “Frosty the Snowman” and “A Charlie Brown’s Christmas.”

The show, written by Michael Carleton, James FitzGerald & John K. Alvarez lifts almost its entire structure from another comedy gem, “The Complete Works of William Shakespeare (Abridged)” (written by members of the Reduced Theatre Company) even so much as covering (arguably) the greatest of Christmas shows, “A Christmas Carol,” as its singular second act target, much like “Shakespeare (Abridged)” did with the Bard’s “Hamlet”.

Only in this variation on a theme, “Christmas Carol” crashes into “It’s a Wonderful Life” yielding some of the biggest laughs of the evening. All three do well incorporating multiple props, costume pieces, accents and impersonations utilized throughout the show.

A lot of interacting takes place with the audience and the trio do pull some unwitting victims...uh, volunteers...to assist in some of the sketches. They also take turns listing obscure (and some quite disturbing) “fun facts” about Christmas traditions from around the world which helps the other actors set up for the next bits to be performed.

There were some flubbed lines and some occasional abandoning of what little scripting there seems to be as the actors, under the capable direction of Christine Taylor, are allowed to liberally  “experiment” with the material using assorted and wacky improvisational techniques.

With the sheer volume of characters each must play, the three performers have great chemistry and collaborate well together.

With two performances left, “Every Christmas Story Ever Told (And Then Some)” is a laugh a minute and a nice gift for the holidays.