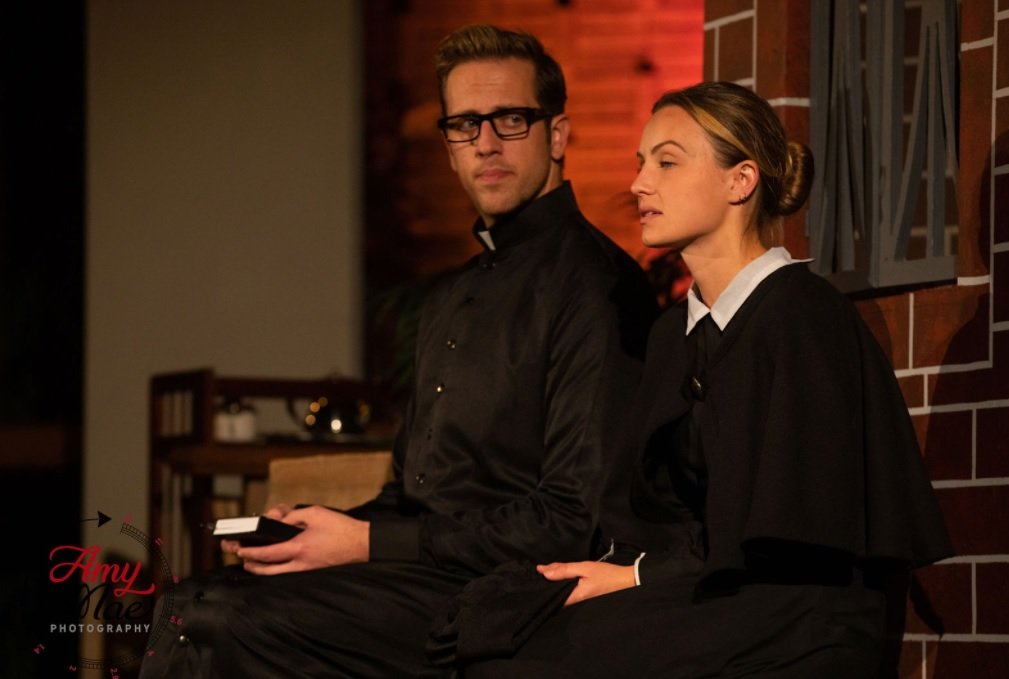 "Toxic ambiguity leaves no doubt for great drama at STW!"

General Admission. STW announces that all tickets for this show will be 100% PAY WHAT YOU CAN!
STW: "We feel that this show deserves to be seen by all and are excited to increase access to the arts to everyone!"

This review takes on a slightly personal perspective.

In March, 2020, mere days before the nation shut down due to COVID-19, I was fortunate enough to preview a performance of Studio Theatre Worcester’s production of John Patrick Shanley's "DOUBT, A Parable."

By this point, with as many cancellations as I was receiving for METRMAG, I was anticipating (but hoping I was wrong) that the production was going to be cancelled.

Unfortunately, I was right.

However, what I witnessed was still an impressive ‘rehearsal’ which unfolded as an actual live performance. At the time, I thought this was a show ready for its premiere. I could not see it getting ANY better.

Fortunately, I was wrong.

560 days later (more or less), the resurrected STW show is back and better than ever.

Featuring the same outstanding cast of four and a newer, more streamlined set, “Doubt” premiered last night (09-24) in its new performance space at the Salem Covenant Church in Worcester and should not, cannot, MUST NOT be missed.

Each actor brings a fully formed character to life and drives Shanley's script with a grim if undeniable believability.

Set in the Fall of 1964 at the fictitious St. Nicholas Church School, the play centers around a priest, Father Flynn (Todd Vickstrom), who becomes bitterly embroiled in defending himself against accusations of inappropriate sexual conduct with a young African American male student. His accuser is Sister Aloysius (Alexa Cadete), the principal at the school.

Thanks to the superb approach each actor takes to their respective characters, Vickstrom and Cadete are successful at illuminating the highly toxic atmosphere created by "Doubt".

Sister Aloysius, a staunch conservative Catholic, has many presumptions about the guilt of the more progressive Father Flynn. She is certain, or at least convinced, about his being a predator serving in the guise of a man of the cloth. But she also has not one, single ounce of concrete, credible proof. Only a theory.

Still, she persists and, ultimately, is successful at creating enough "Doubt" that Flynn's vocation becomes jeopardized.

Shanley's story intentionally never reveals if Flynn actually molested Donald Muller, the (never seen) black youth in question. Instead, the focus on the youth takes on its own added dimension in a fierce exchange between Sister Aloysius and the boy's mother, Mrs. Muller (June Dever). 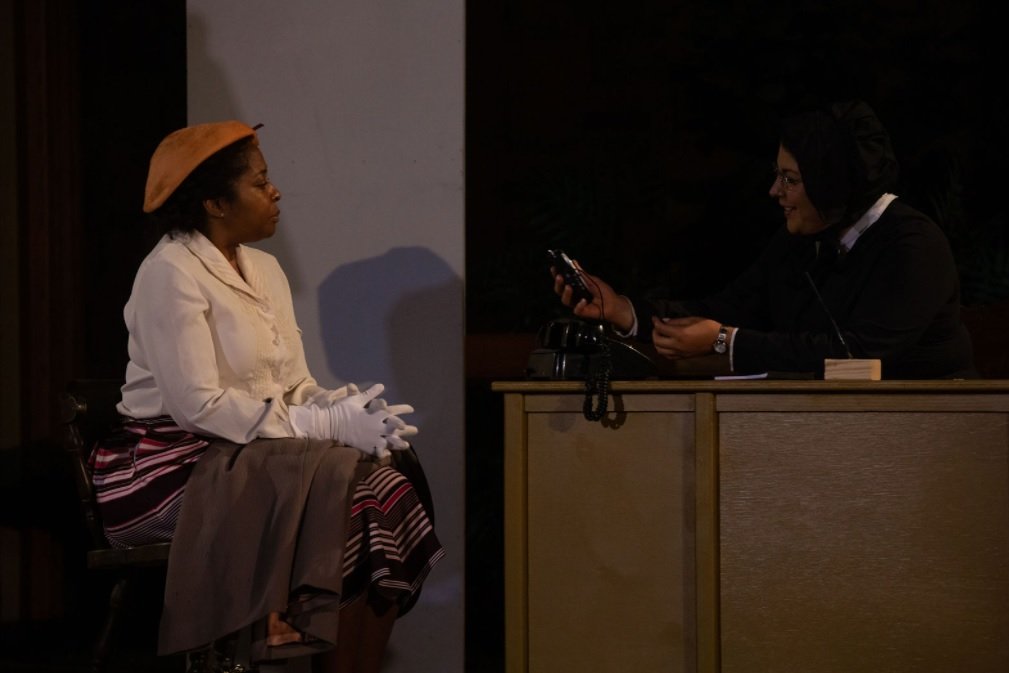 Here we learn that, before Flynn, Donald's life was already at risk by his rejecting parents and neighborhood kids who saw him as having a virtual bullseye on his back.

In 1964, in any community (not just the urban inner-city African American communities) the term "Dead Man Walking" would most likely be applicable to this young man's "future" and Mrs. Muller is fully aware of it.

It is clear, from some "in between the lines" moments provided by Shanley's dialogue, that Mrs. Muller blames herself for producing a child both she and her husband see as a freak or "mistake"...but she still loves her child enough...JUST enough...to want to shelter Donald, even if it is by placing him in the care and supervision of a presumed sexual predator.

The one person struggling the most at determining the validity of the accusations made against Flynn is the young, pretty and thoroughly optimistic Sister James (Alexandra Barber). She is a perfect foil for the jaded, cynical Sister Aloysius.

But is her wanting to believe the possibility of Flynn's innocence reflective of her naivete or faith? With the welfare and ultimate fate of a young person hanging in the balance, where should her (or anyone's) cynicism or faith be placed?

These questions are left intentionally open by Shanley's script and under the interpretive direction and guidance of the show's director, John Somers. The set courtesy of David N. Farreh is simplicity itself but placed within an actual church allows the church itself to become its own central character in the story.

The element of overwhelming speculation, of "doubt", creates an atmosphere of such toxicity that eventually the innocent might as well BE guilty because judgment becomes rendered before the trial even begins.

Was Flynn guilty of his supposed crime? Given the long history of such predators lurking within the Catholic church (or within ANY institution where such tragedies occur when trust becomes a weapon used to the advantage of predators) it would not be surprising.

But the fact is: we do not know. Only two people know for sure what happened during the "seclusion" of Father Flynn and young Donald Muller. Father Flynn, the boy...and perhaps a black bird or two. But none are talking.

After some performances, if you have your own theories or concerns you wish to express, there will be opportunities (*) to participate in a post-show conversation with the cast, crew, and community members!