(COVER PHOTO: The Dance Pros of the new "Dancing With the Stars Tour 2022 Live!". Photo Courtesy of ABC)

Dancing with the Stars

The following is a review of the Jan. 13th, 2022 performance of “Dancing with the Stars Live Tour 2022” at the Boch Center Wang Theatre.

Joining the tour in Boston are "Dancing With The Stars" Champions Kaitlyn Bristowe (Season 29) and Iman Shumpert (Season 30), along with celebrities Jimmie Allen and Amanda Kloots!

These fan favorites will be bringing ALL their Mirror Ball-worthy moves!

Guest stars will be joining your favorite dancers from this iconic television series and hitting the stage this winter with an ALL NEW "DANCING WITH THE STARS LIVE!"

Continuing its legacy of performing show-stopping routines alongside new numbers choreographed just for the live show ranging from the time-honored dances of the Cha Cha, Foxtrot, Salsa, Tango - and everything in between.

In this latest North American tour, audiences will have the opportunity to experience the excitement, glamour and glitz they see televised in the DWTS ballroom (on ABC) performed live in their hometowns.

Performing in Boston last week to an enthusiastic crowd, the show is travelling to multiple destinations and should not be missed.

Every style of dance that viewers would see on ABC’s “Dancing with the Stars” (DWTS) is here – ballroom styles such as Tango, Foxtrot, Cha-Cha, Waltz and their variants – along with many great contemporary dance moments in every combination using the professional dance ensemble.

Just as it did in 2019, the spectacular show features dazzling dance routines, astounding special effects and a light and sound show that seems to expand beyond the confines of the stage space.

But with as much "spectacle" as is expected for a show like this what may surprise audiences is the level of personal rapport between themselves and the performers on stage (and sometimes in the house aisles).

Featuring DWTS Champions Kaitlyn Bristowe (Season 29) and Iman Shumpert (Season 30), the show's theme focuses on concepts of vulnerability, passion and strength and we see examples of these and more performed in the cleverly assembled dance routines throughout the show. 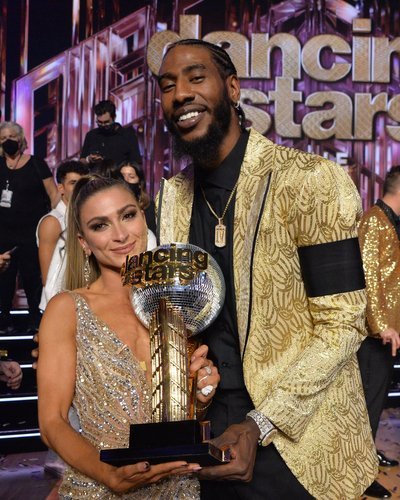 As always, the show is high octane entertainment from beginning to end. So, no matter how you get there,  it is a show definitely worth the journey.