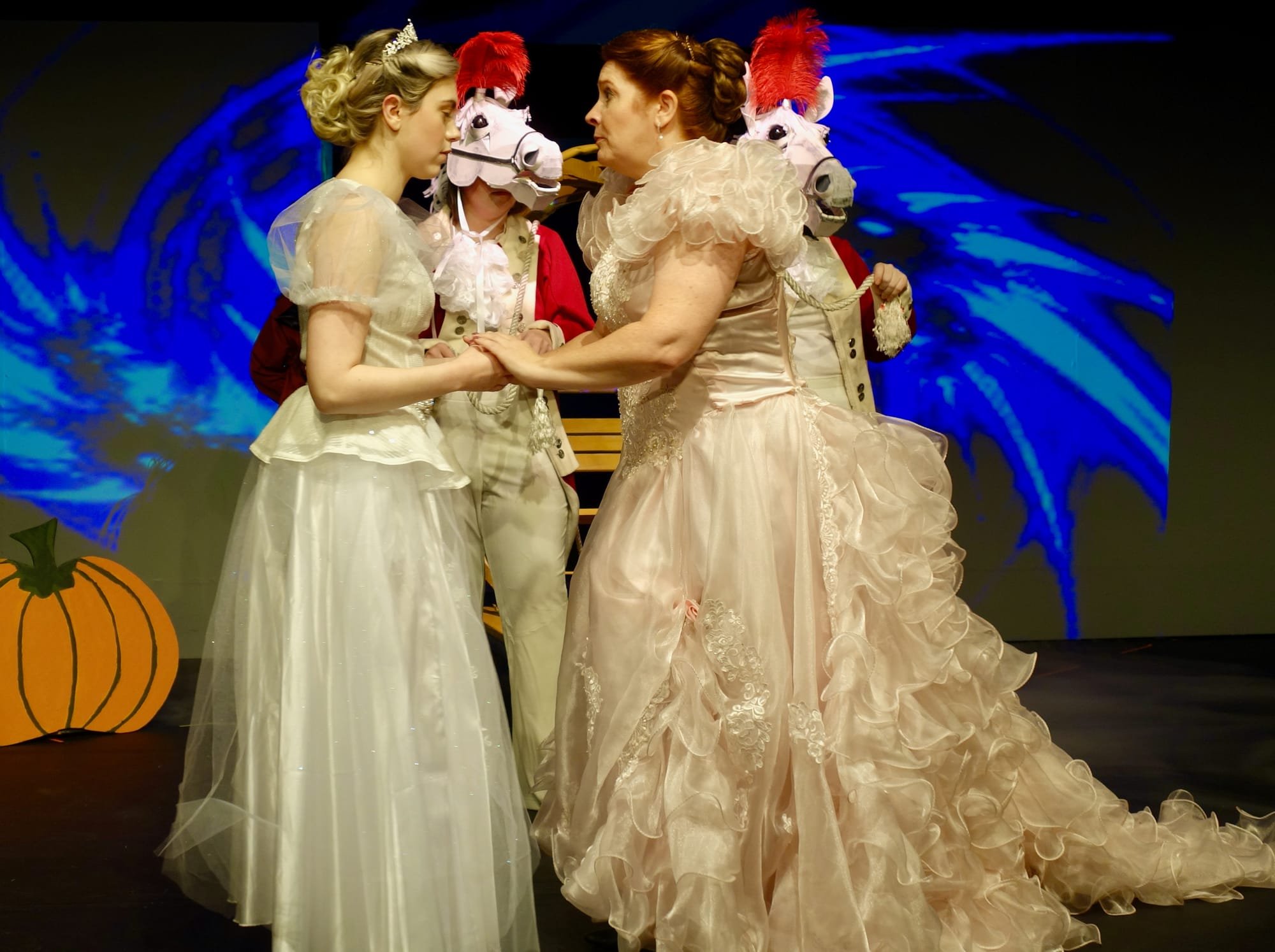 Tickets for this musical are $25 for regular admission, and $20 for students and seniors.

Yes, as stale as the tale might seem by today's standards, this musical adaptation is a VERY funny production, much of it thanks to a firm course pushing it in that direction and a capable execution by a competent ensemble.

Many in the audience will recognize the familiar tale of young heroine, Ella, aka “Cinderella” (Julia Bartoletti), living in a mythical kingdom - forced to cater to the needs of her cruel stepmother, here named “Madame” (Michele Tousignant) and her stepsisters, Gabrielle (Jess Guertin) and Charlotte (Bethany Arsenault).

However, this latest re-write updates much of the cruel depths of the “steps” leaning them more toward mischievous than malevolent.

In fact, Gabrielle proves to be more supportive ally to her step-sibling Ella than found in previous incarnations of the Rodgers and Hammerstein’s classic telling. Guertin impresses as Gabrielle showing great empathy to Bartoletti's Ella.

Ella dreams of a nicer world and a better life, not only for herself but for others in the kingdom who are having their homes and land taken away by an unscrupulous aide to kindly Prince Topher (Chris Quigley) named Sebastian (Liz Couture).

With the help of Marie (Linnea Lyerly) - who Ella is surprised to discover is, in fact, her magical "Fairy Godmother" - Ella undergoes a "metamorphosis" which includes, but is not limited to, looking like a princess - as Ella attends a ball to be with her prince. 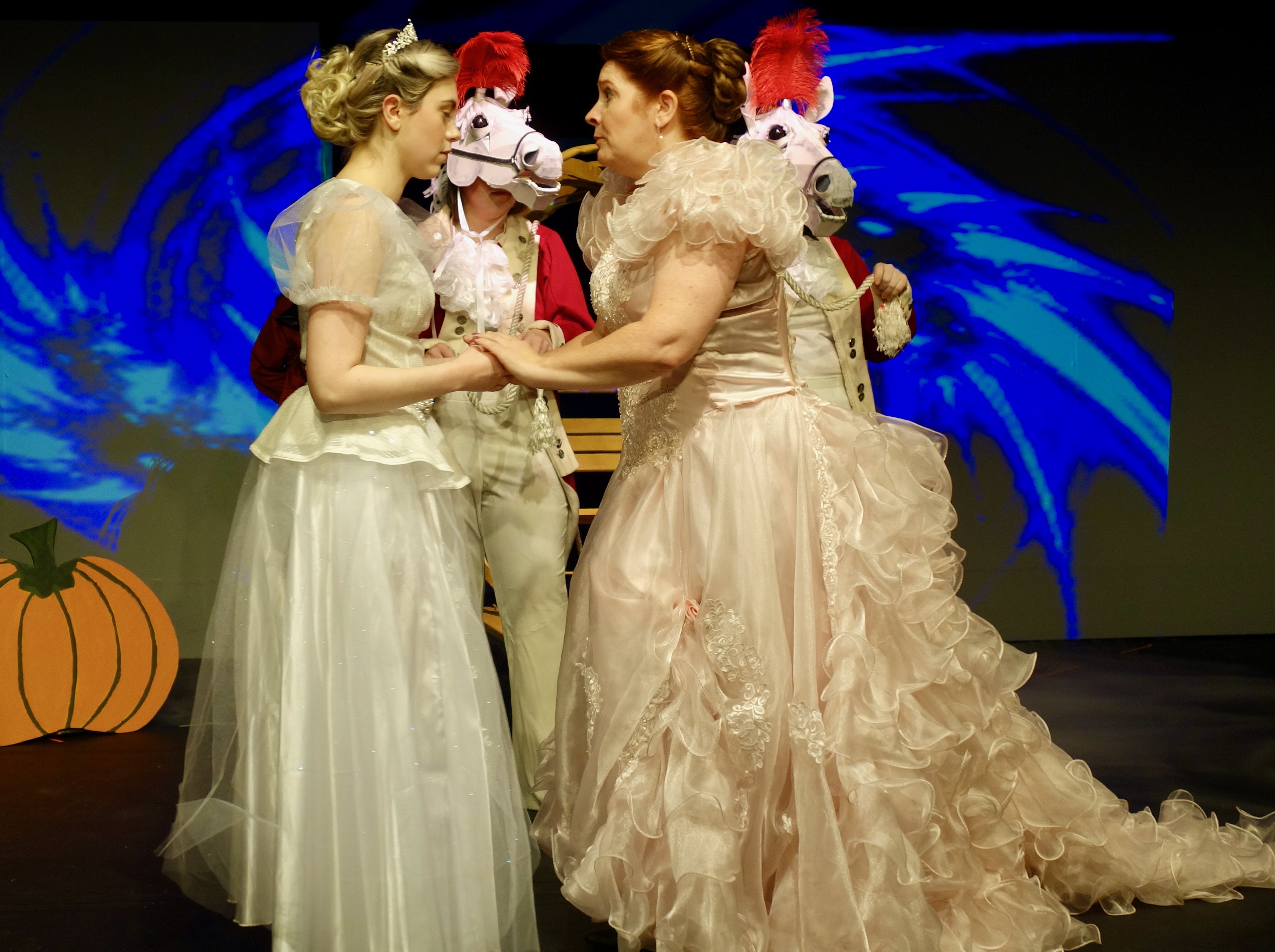 Tunes from the familiar Rodgers and Hammerstein 1957 musical production are here.

Both Bartoletti and Quigley impressively handle the more tender ballads such as “Ten Minutes Ago” or "Do I Love You Because You're Beautiful."

"Stepsisters' Lament" becomes "Stepsister's Lament" and is hilariously sung, in this version, led by Arsenault as Charlotte and female members of the ensemble.

"The Prince Is Giving a Ball" is sung by Couture as Sebastian with Lord Pinkleton (Thomas Jaquith-Houston) and the ensemble.

Bartoletti is not only a magnificent vocalist but also has a firm grasp on the "CINDERELLA" character.

In this latest adaptation, Ella is not merely a singular-dimensional victim of oppression seeking or needing to be rescued by a prince.

Here, while still contending with an adversarial home situation, Ellla is seen as her own, complete individual, an optimistic supporter of others in her life and one who is quite willing to note areas of social hierarchy where this "prince" may come up short.

Acknowledging the restrictions of the space which is not able to present a grander, more opulent staging, Grigaitis, along with choreographer Denise Day, wisely focus more on where the show does work better (and smarter) on the smaller Calliope black box stage.

Gone are any large scale sets, replaced with a more multimedia approach. Scaled back are choreographed numbers such as “Ten Minutes Ago Reprise” which allows for a nicer, more fluid movement on stage by limiting the number of participants rather than trying to cram every single member of the ensemble into the number.

With this approach, the cast is able to better showcase just how clever and funny the updated show is while still adhering to the lovely score to which many have become accustomed.

In the newer version, gone are Topher’s parents, the King and Queen, who added little to the original story to begin with.

Instead, in this version, Topher is an inexperienced, ill-advised "ruler-to-be," mostly kept in the dark about Sebastian’s illicit activities, which involves a subplot whereby Sebastian conspires with Madame to have Topher marry Gabrielle. 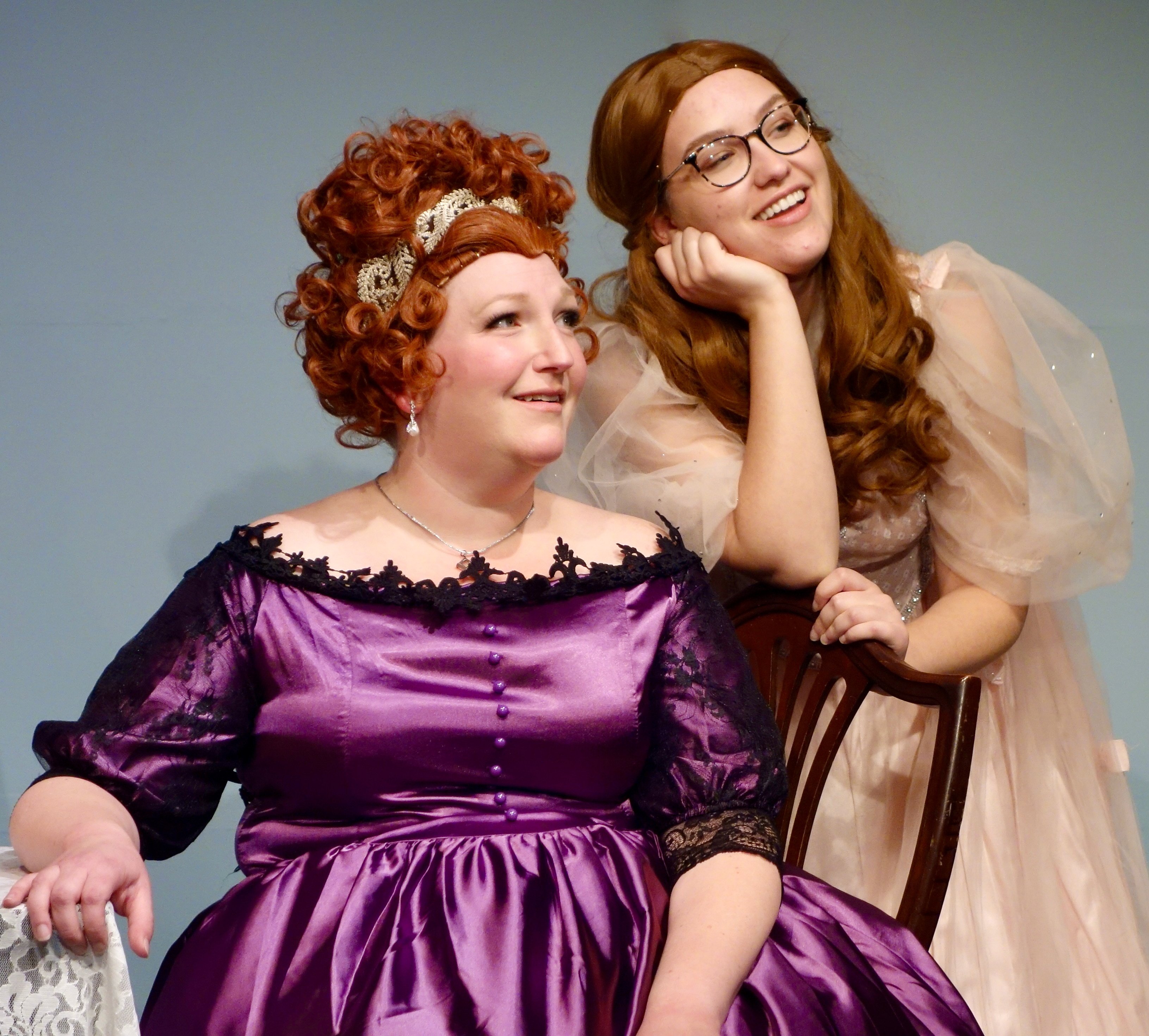 Yet, much to the chagrin of both antagonists, not only do the Prince and Ella still fall in love, there is a hysterical sub-plot added where Gabrielle is in love with the kingdom’s political anarchist, Jean-Michel (in a witty performance by Spaghetti Jensen-Fellows). This new subplot also explains the reasoning for the change required to the aforementioned "Stepsisters' Lament."

The humor in many scenes steadies the show's pacing which keeps it moving at a brisk, fluid pace.

Another clever approach to the adaptation involves Ella's "metamorphosis" sequence which includes the transformation of a pumpkin into a carriage.

This is expertly accomplished by way of use of puppetry, some clever stage trickery using specialty lighting, sound, costumes and props, all while keeping the sequence "tongue-firmly-planted-in-cheek."

Costumes supplied by Donna Reidy and Jan Fuller are all resplendent and conducive for the fairy tale fashion required. 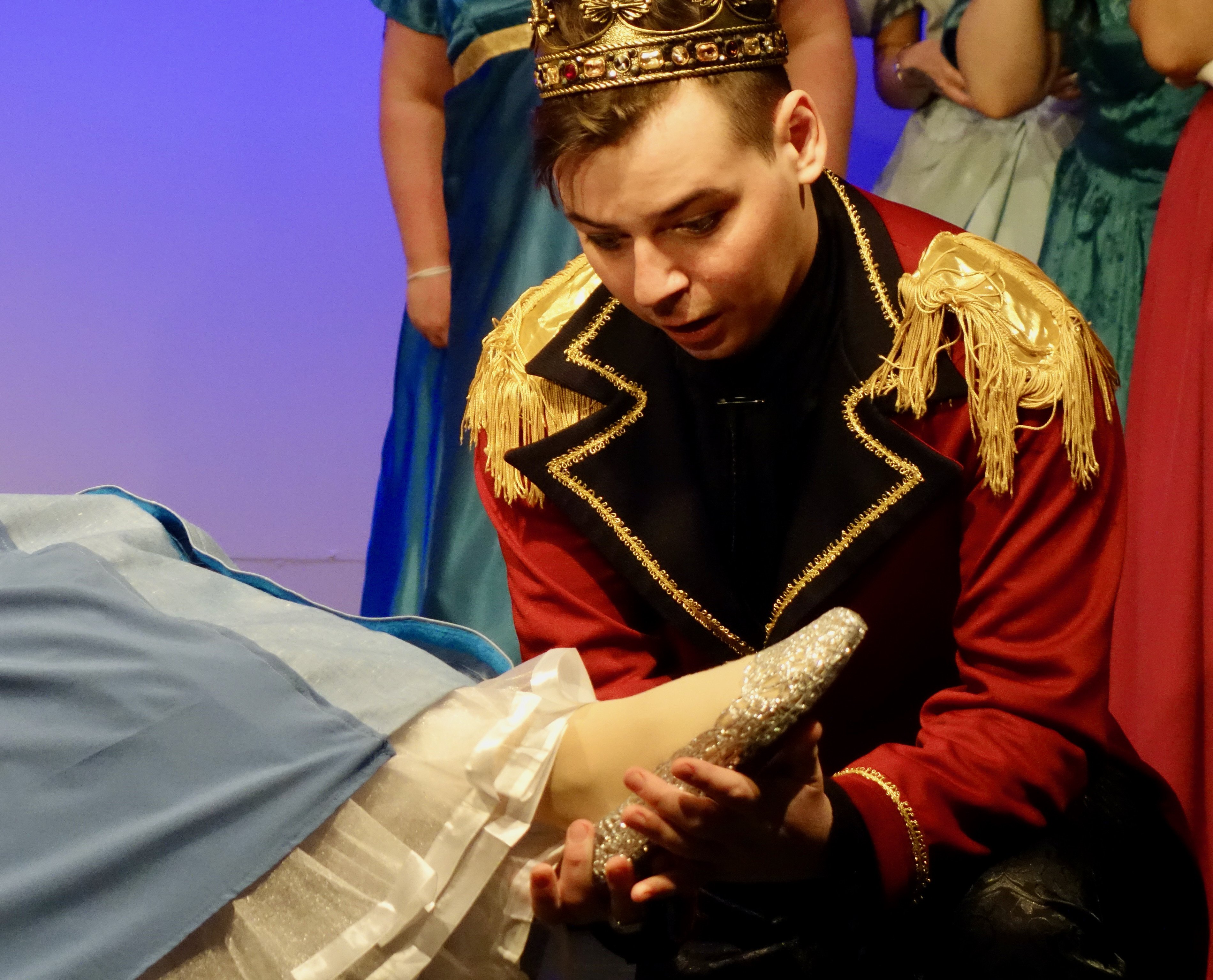 Yet, for all the required and clever adjustments taken, the musical does still prove challenging at times for the smaller stage, at times.

Some "transformational" moments that do NOT move as fluidly, or quietly, are some of the set changes into and out of Madame's house.

Also, the spacing of two pillars during the ballroom scene might have served better if moved further off to either side of the stage as they partially obstruct the view as positioned.

Yet the charm and effort are all still there and this "CINDERELLA" is, arguable, the best rendition of the endless (and, in some cases, needless) updated variations out there.

Overall, the musical, at Calliope now until December 11th, is wonderful "family friendly" fare and, while not a holiday standard, still adds to the joy of the holiday season. 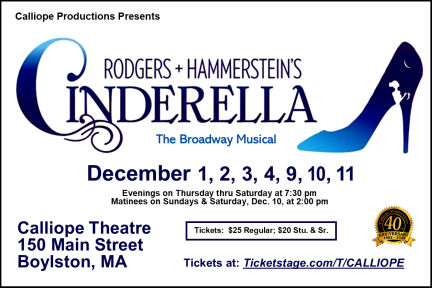 Featuring some of Rodgers and Hammerstein’s most beloved songs, such as “In My Little Corner,” “Impossible,” “Ten Minutes Ago,” “Do I Love You Because You’re Beautiful?” and “A Lovely Night,” this show contains some new characters and surprising twists that make it a thoroughly entertaining holiday season treat for the entire family.

For more information or to reserve or purchase tickets, please contact the Calliope box office at 508-869-6887.

We look forward  to seeing you at the theatre!