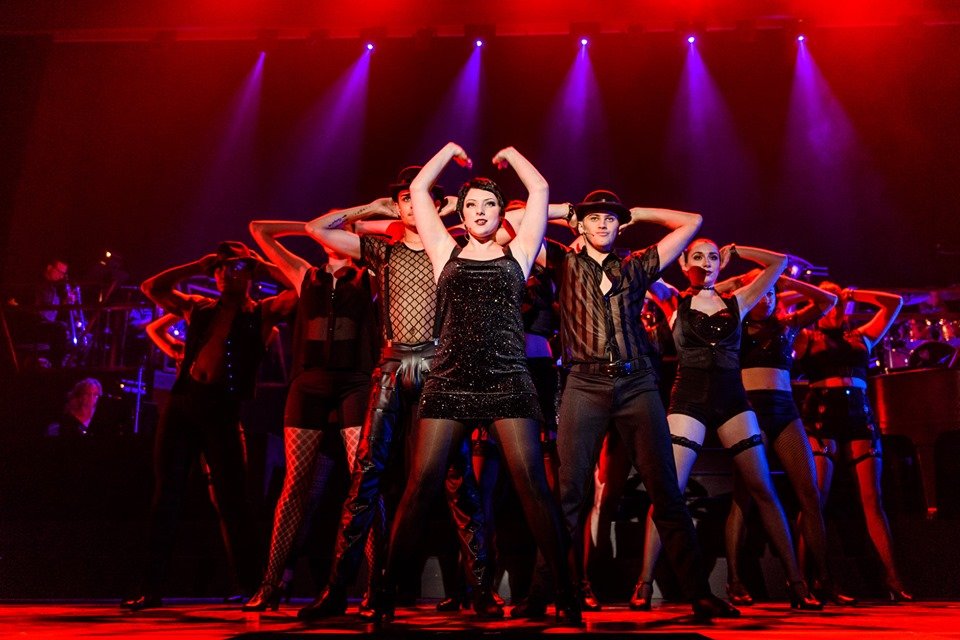 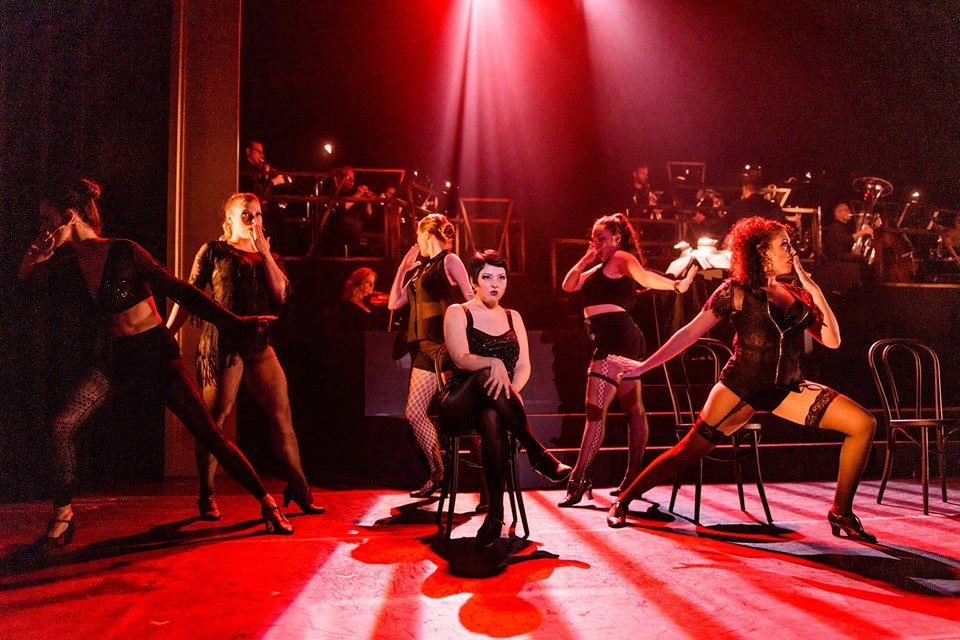 The following is a review of the final performance of “Chicago” which had its closing show on Oct. 20, 2019. The Stadium Theatre production ran for just three performances, which is unfortunate, since the production deserved a far more extended run considering its high “caliber” production details and razzle dazzle cast and ensemble. Photos credited to Stadium Theatre and MikeScottPhoto.

As the show begins, the stage is practically bare and adorned in black…as are most of the amazingly talented featured ensemble performers in the show.

The orchestra is on stage situated just below a big red and sparkly “CHICAGO” banner that hangs suspended from the ceiling. The word in the banner is positioned in front of solid black bars which could actually serve as dual symbolism for either bars found on a music staff or as part of a jail cell.

There are six, matching, small, armless wooden chairs, painted black (of course) and placed three on either side of the stage.

As the show begins, it is 1920’s Chicago. The banner goes away and Vaudevillian murderous Velma Kelly (Tera Sheerin) emerges from an open trap door at the front of the stage. 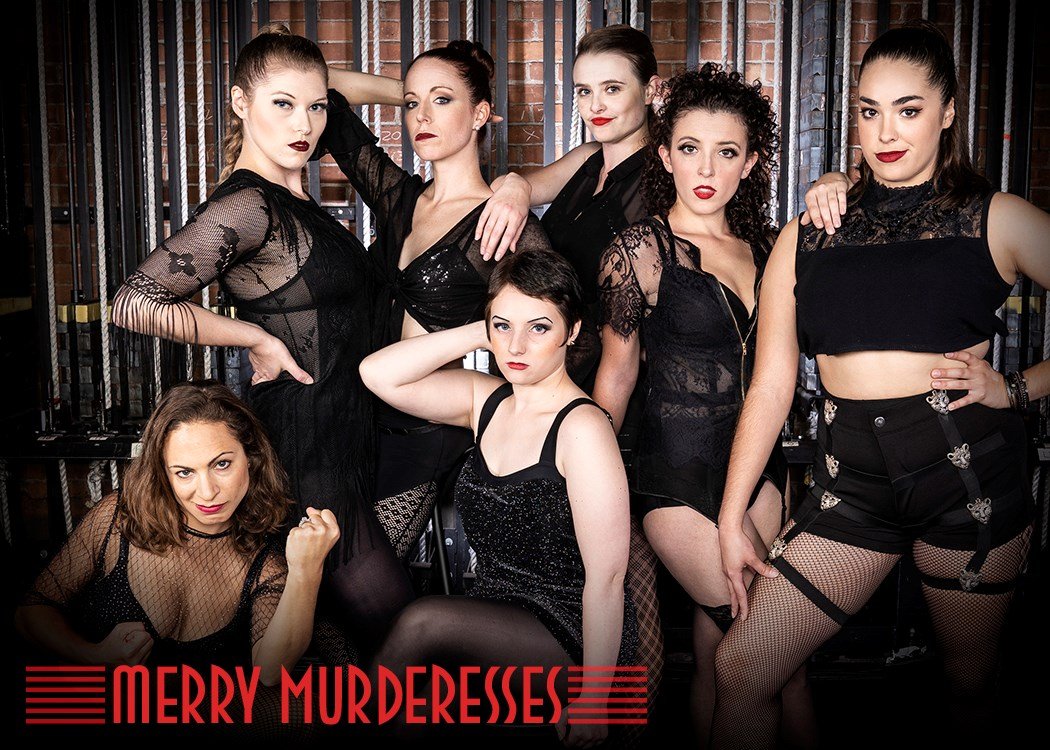 As she does, lighting happens from the start of the show resulting because this Velma is simply a vocal dynamo. When Sheerin holds the extended note in the word “Jazz” in the show’s opener “All That Jazz” you think she could sustain the note for hours. She has many moments to shine and does not miss any.

A musical is only as strong as its weakest ensemble member and that is why this production is so exceptional. The ensemble not only sings and “executes” the Fosse-based choreography meticulously, they also assume multiple supporting roles throughout the production and do so well.

When the term “Fosse” is used, it refers to a more mature, elevated style. It is a technique both developed and utilized by immortal choreographer, Bob Fosse. Fosse not only intentionally heightened the more evocative of physical moments on stage, he also demanded it, right down to the final positioned finger and toe. He incorporated elements of ballet, jazz, tap and contemporary movement.

Fosse may not have invented certain dance moves, but he certainly made them 100 percent “Fosse” and, when used in shows like “Chicago,” and executed well by choreographers like Jennifer Webb here, the results are spectacular.

The most iconic number from the show is “Cell Block Tango” and, while no physical jail bar cells are used in the Stadium show, the chairs used by Velma and fellow inmates (aka the “Girls”) become integral props within of the number.

As to other props, things are kept to a minimum, which is one smart choice among many smart choices by director William Deschenes who successfully utilizes the entire stage space.

“Cell Block Tango,” the shows opener, “All That Jazz,” the hysterical “We Both Reached for the Gun” and “Razzle Dazzle” are all numbers in which the ensemble is utilized to its fullest potential.

In the number “Roxie,” performed by fellow murderous Roxie Hart (Chantell Arraial), the male cast members of the ensemble are truly given their moment to shine and they do quite adeptly. They also have a similar moment in the Act Two Velma number, “When Velma Takes the Stand.”

As Roxie is jailed for murder of her lover, her only ally is her naïve milquetoast husband, Amos (Will Gelinas) who agrees to pay for her smooth-talking lawyer, Billy Flynn (Jason Denton).

Arraial has precise comedic timing which is where she excels as Roxie and in the number “Roxie.” Denton brings a smug charm to Billy and both he and Arraial are strong vocalists. They have terrific chemistry in every scene they are in. 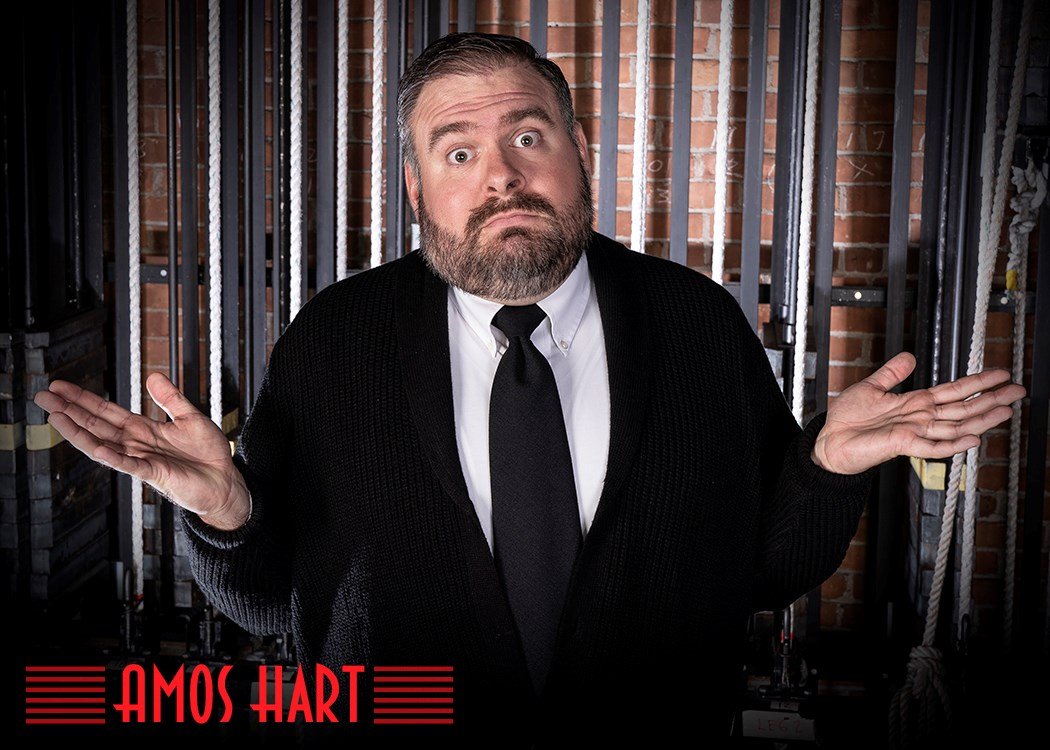 William Gelinas as "Amos Hart" in "Chicago".
Photo credit to Stadium Theatre Facebook page.Gelinas easily earns laughs from the crowd as pushover Amos, but he also earns many cries of sympathy for his melancholy ode to Amos’s own obscurity in “Mister Cellophane.”

The only other vocalist in the same league as Sheerin, however, is the inimitable Michaelyn St. Pierre who is a force of nature as Matron “Mama” Morton. She not only nails the powerful “When You’re Good to Mama” in Act One, when she and Sheerin duet in the Act Two “Class” they are an unbeatable duo.

The final two numbers in Act One are the weakest in the show, not because of the performances but rather because of the structure of the book by Fred Ebb and Fosse.  Also, the resolution at the end of the show happens far too quickly. But even these moments are easily forgiven because the rest of the show is so well structured.

The orchestra, measure for measure, is well united under the music direction of Alex Tirrell. Vocally, there were a couple of minor pitchy moments but nothing that detracted from the overall ambience of the material presented.

Enjoyable from beginning to end, it should be against the law that this show could not run longer.