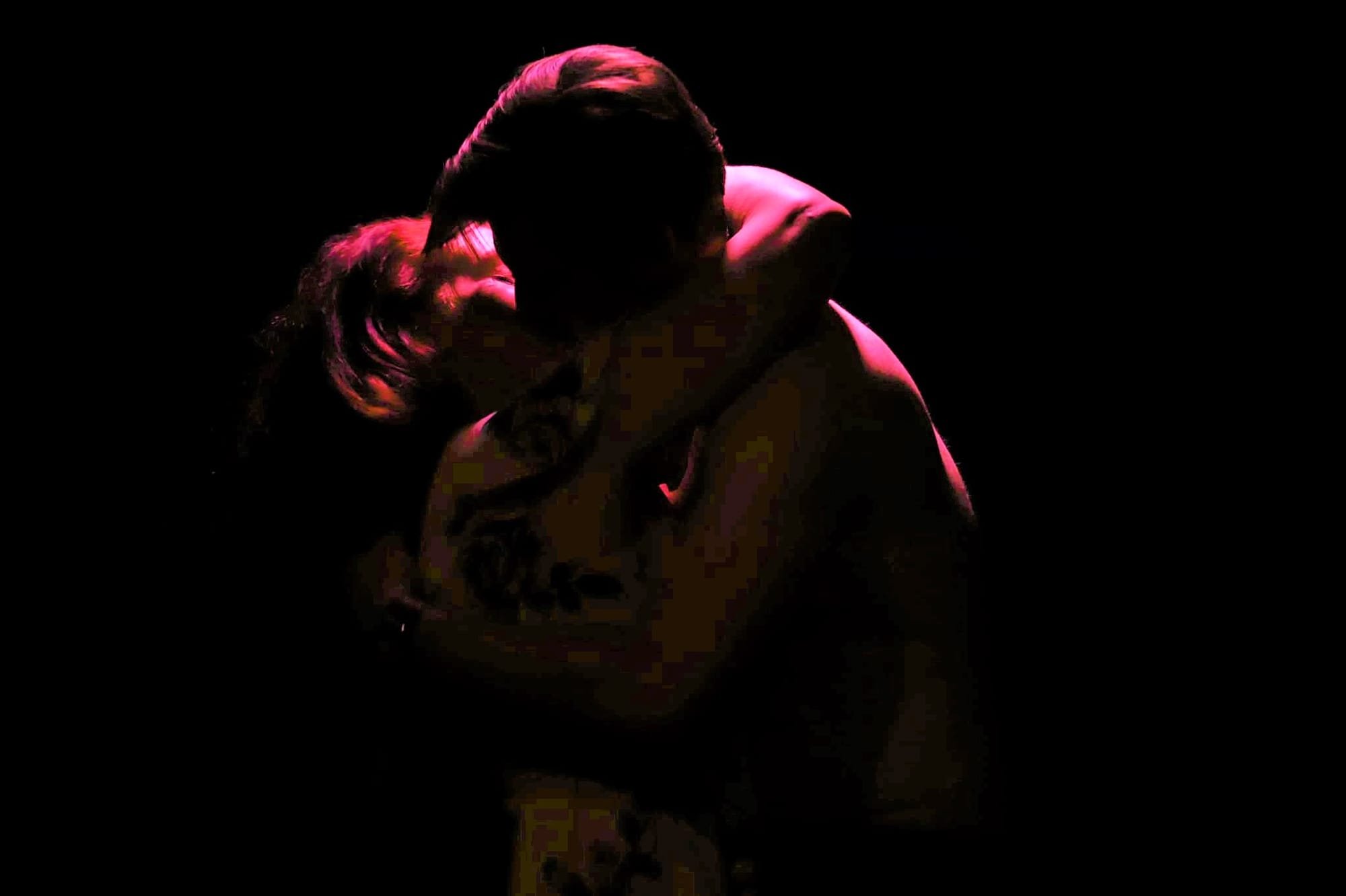 (Cover Photo: Lydian DeVere Yard and Kenny Meehan embrace in a scene from the Burlington Players production of "Bridges of Madison County" by Jason Robert Brown. Now playing in Burlington, MA. through May 21, 2022. Photo courtesy of Jason Hair-Wynn.)

"THE BRIDGES OF MADISON COUNTY"

Based on the novel by Robert James Waller

Directed and Choreographed by Jason Hair-Wynn

The Park Playhouse is conveniently located just off Rte 95 and Winn Street in Burlington, MA.  There’s plenty of parking. To reach the Park Playhouse, take Route 95/128 to Exit 34, Winn Street. Turn toward Woburn and take the third right onto Harriet Avenue (a steep hill). Follow to the end and make a left onto Edgemere Avenue. You'll see the entrance to Overlook Park about 50 feet away. Drive into the park and bear left. The Park Playhouse is the last building on the right.

THE BRIDGES OF MADISON COUNTY is presented through special arrangement with Music Theatre International (MTI). All authorized performance materials are also supplied by MTI. www.mtishows.com

Burlington Players takes us on a musical journey to Iowa to visit the “Bridges of Madison County” and the folks we encounter while on that journey we may not soon forget.

The 2014 Tony Award-winning musical’s story is based on Robert James Waller's 1992 novel, with a book by Marsha Norman and music and lyrics by Jason Robert Brown.

When the cast recording of “Bridges of Madison County” had been released, I had not seen the show yet and found the recording quite innocuous, bland, lethargic…oh, heck…I thought it was dull.

In retrospect, though, perhaps I was not giving it a fair chance not having the visual experience to help me better understand the material.

Could be. It happens.

I spoke with a colleague about my impression of the recording and this person staunchly disagreed, finding it a simply magnificent score from beginning to end.

At that time, I surmised that perhaps my perception of the musical might improve once getting to see and potentially embrace the show.

Now, years later, Burlington Players has offered me that opportunity, producing a gorgeously staged production of the show and, by all means, there is plenty here to enjoy.

The performances, the set, the musical direction by Gina Naggar, the company orchestra, stage director Jason Hair-Wynn’s overall approach to the material – every component is high quality, for sure.

The score, however, does still tend to malinger and depress far more than it needs to.

There are a few amusing, more lighthearted moments that take place in the show, thanks to numbers like “State Road 21,” “When I’m Gone” and others.

Yet the overall score by composer Jason Robert Brown (whose credits include the fabulous musicals “The Last Five Years,” “13” and most recently provided the score for the Broadway return of Billy Crystal in “Mr. Saturday Night”) spends more time depressing the HELL out of us than orchestrally enhancing aspects of the story.

Brown's orchestrations have a unique talent for immersing us into a veritable whirlpool of emotions. Many of his scores share this brilliant characteristic.

Here, though, we, his audience, feel as if we are listening to his songs playing on the radio as we travel along those old “Bridges of Madison County,” and it just seems to wallow in angst and misery moreso than any sad country song sung by Patsy Cline (who is even given a slight homage late in Act One with the number, "Get Closer" sung superbly by Kathleen Wackowski).

That said, Brown's work on this musical did win the 2014 Tony Awards for Best Original Score and Best Orchestrations.

While fading with time, the second World War is still very much seen in the rear view mirror of most pick-up trucks in the sleepy little town of Madison County, including the truck owned by the Johnson family.

World War II veteran, Bud Johnson (Eric LaMarche), moved his Italian wife Francesca (Lydian DeVere Yard) there years ago so they could raise a family together on their farm…and that is just what they did.

Now, approximately 20 years after the end of that war, the children are nearly grown (not they act like it) and help out on the couple’s family farm.

Daughter Carolyn (Hannah Clifford) is more aligned to farming life than the couple’s son, Michael (Timmy Chase) and, as the show progresses, these subplots become clearer and clearer.

At the beginning of the musical, Francesca is alone in her thoughts, retrieving several personal souvenirs from a box long tucked away somewhere. These items will later prove highly significant to the story about to unfold.

Bud takes Carolyn and Michael to Indianapolis for three days to the national "4-H" fair to show Carolyn's prize steer. It is a big deal and the competition could mean the world to the family and Carolyn’s future.

Once they leave, Francesca intends to spend her time alone, enjoying some much needed solitude in her life devoted to everything for everybody…everyone, that is, except herself.

Almost like clockwork, into her life drives up Robert Kincaid (Kenny Meehan) a tall, handsome photographer who has come to the county to take pictures of covered bridges for a national magazine. He stops to ask for directions. You can probably surmise what happens next.

If the plot sounds familiar, some might recall the 1995 hit movie featuring Clint Eastwood (who directed) and Meryl Streep in the roles of Kincaid and Francesca.

Now she meets an attractive man, one with chiseled features, an intense presence and great confidence - a stranger with whom she instantly, completely “bonds” with. He is a stranger but, together, they fit like old souls just meeting for the first time. The bond leads to a foregone conclusion but the journey there is captivating, for sure.

As mentioned, the musical’s more lighthearted moments come far too infrequently. However, when those moments do happen, it is mostly provided by the exceptional comedic performances by snooping neighboring couple, Marge (Kathleen Wackowski) and Charlie (Arthur Comer).

Two wonderfully alleviating performances that help us forget that the first act runs a whopping 90 minutes before Francesca and Michael reach their (spoiler alert!) highly-anticipated moment of emotional...and sexual...abandon. 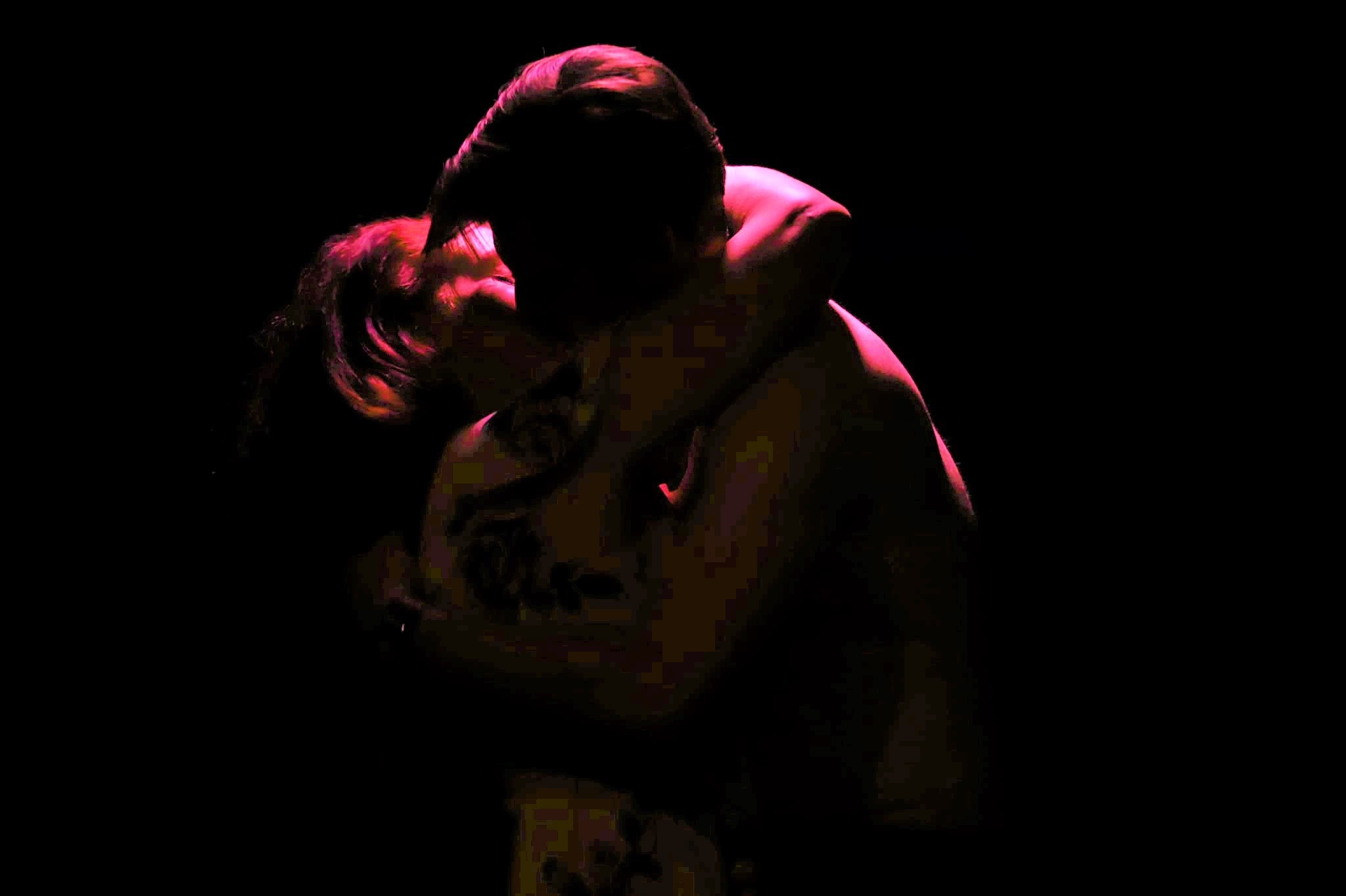 (Photo: Lydian DeVere Yard and Kenny Meehan embrace in a scene from the Burlington Players production of "Bridges of Madison County" by Jason Robert Brown. Now playing in Burlington, MA. through May 21, 2022. Photo courtesy of Sabrina Ornae Photography.)

The second act deals with the ramifications of that abandon as Francesca, especially, must choose the next emotional path…or bridge…her life will travel.

The performances are all exceptional. The chemistry between DeVere Yard and Meehan as Francesca and Richard is undeniable. Like a trashy romance novel, we root for them almost immediately from the second they meet.

However, we eventually find ourselves becoming more like those snooping neighbors wondering “what about” those impacted by this unforeseen moment in Francesca’s life, questioning what WE might do in a similar situation, casting aside (momentarily) how our actions might devastate others. 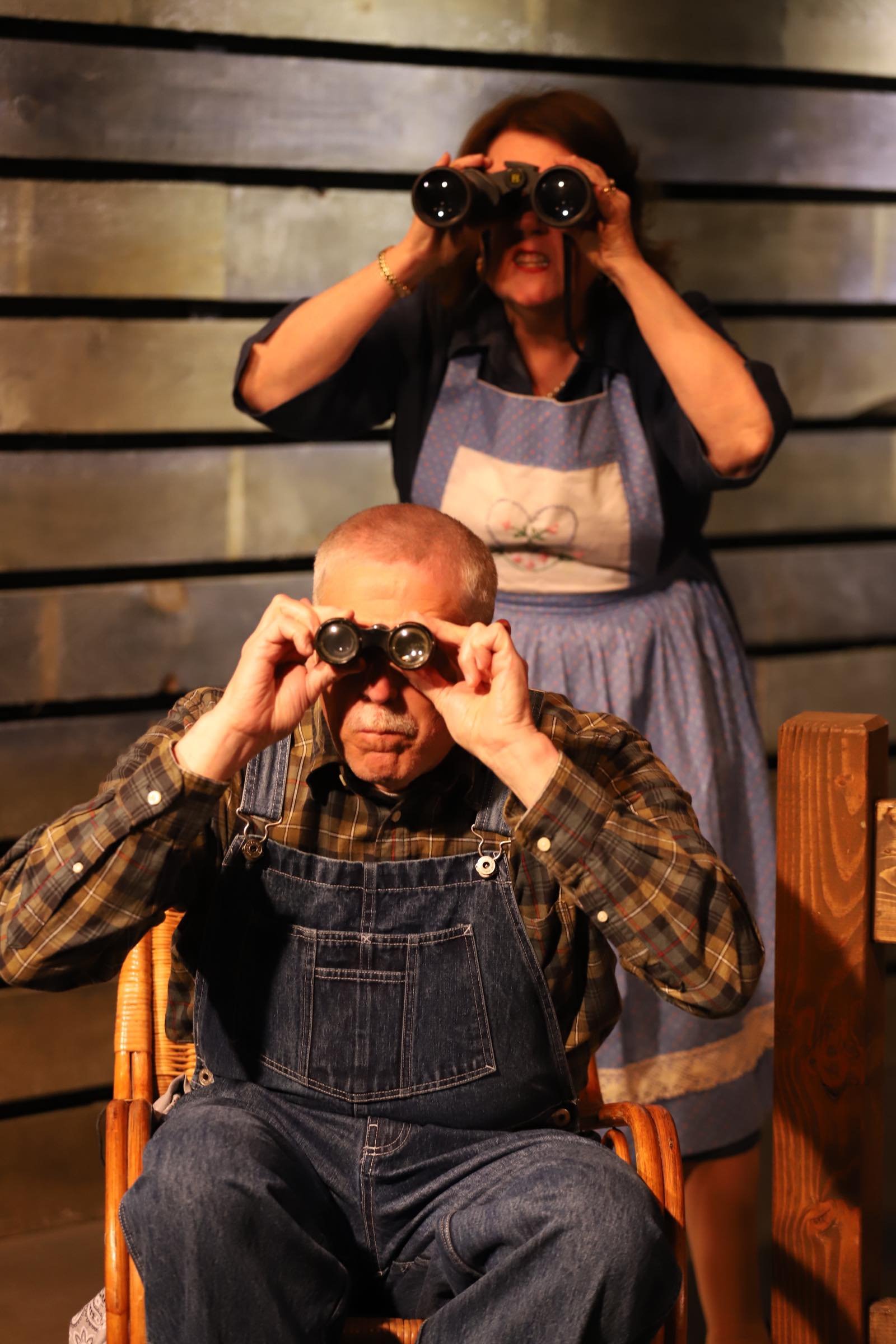 (Photo: B. Kathleen Wackowski and Arthur Comer in a lighthearted scene from the Burlington Players production of "Bridges of Madison County" by Jason Robert Brown. Now playing in Burlington, MA. through May 21, 2022. Photo courtesy of Sabrina Ornae Photography.)

We hear much poignancy reflected in the musical numbers “Before and After You,” "Who We Are and Who We Want to Be" and “One Second and a Million Miles” each sung by Robert and Francesca.

Meehan is simply stirring as he sings “It All Fades Away” and DeVere Yard shines throughout the entire score.

The manic libretto jumps from an almost operetta vibe by the end of Act One then launches into Act Two with an absurd country hoedown vibe.

There are also a couple of songs that feel forced into the score to the point where you can almost hear producers/showrunners speaking with Brown about “adding something lighter as this is getting too dark.”

This did not prevent the cast from rendering one hell of a show. The ensemble delivers 100 percent on the material.

Occasionally, some of the cast did seem to have slight issues getting initial music cues from the unseen orchestra, once in a while appearing to “stumble” into some of the songs. Once in sync, though, they conveyed the score with great aplomb.

The supporting players are all simply marvelous, doubling as stage crew, as well. The set is simple yet concise with many moving pieces involved, and the cast moves scenery as seamlessly as possible to keep scene changes fluid. While long, there was absolutely no "down time" thanks to this approach.

There are also some exquisite lighting choices made to elevate the mood of many scenes. Many fine choices made by the entire creative team involved. 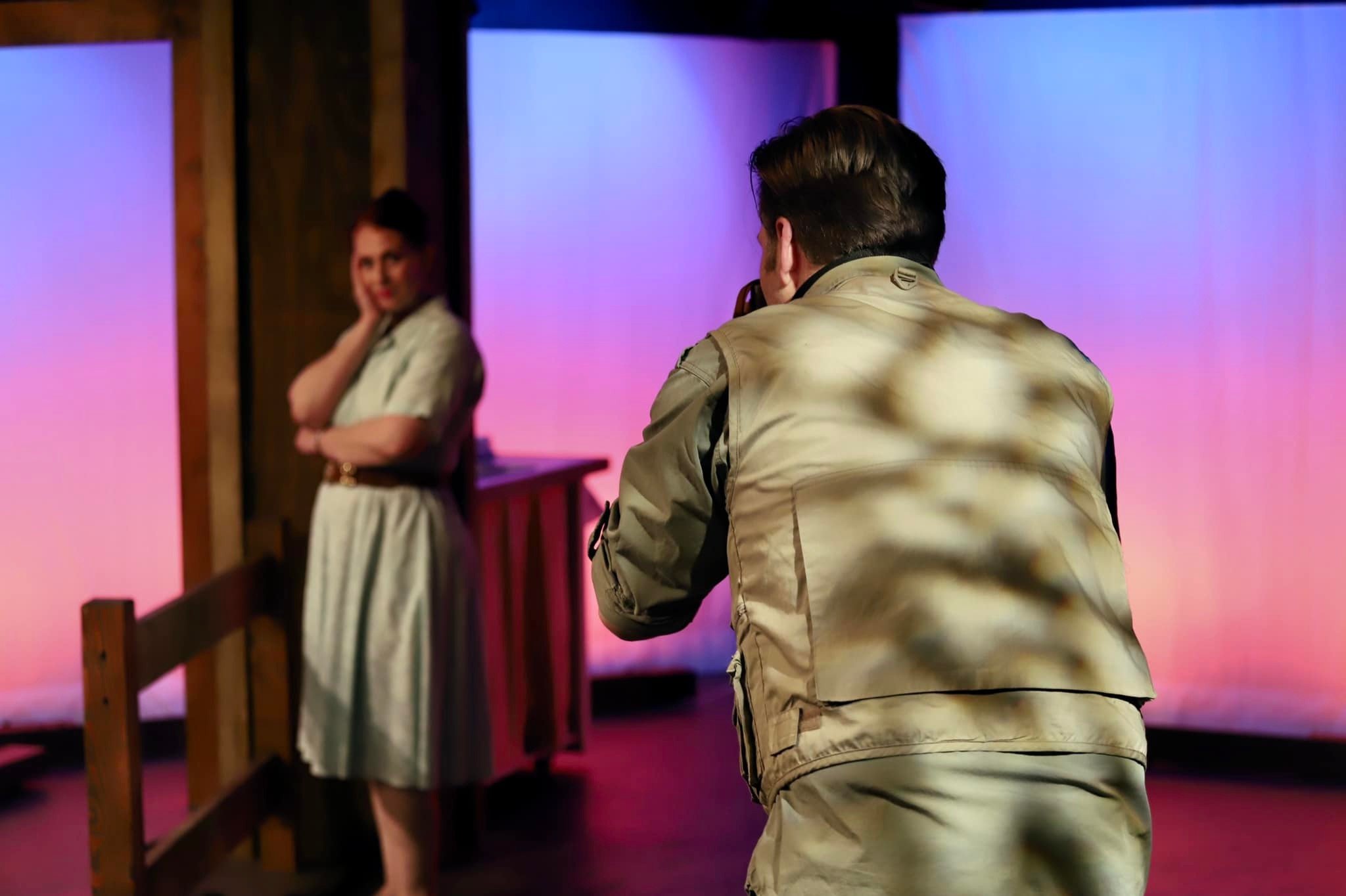 (Photo: Lydian DeVere Yard and Kenny Meehan in a captivating scene from the Burlington Players production of "Bridges of Madison County" by Jason Robert Brown. Now playing in Burlington, MA. through May 21, 2022. Photo courtesy of Sabrina Ornae Photography.)

Arguably, this may not be Brown at his orchestral best (the Tonys have been wrong before). There might even be those who enjoy every blessed note and that is their prerogative.

Unarguably, though, the production by Burlington Players earns high praise. This show has much going for it, especially given the sympathetic characters expertly created from Waller's original story and Marsha Norman’s book of the musical.

If you haven't seen the show yet, it is definitely worth the journey to enjoy the staging by the Burlington Players and to enjoy this elevated trashy novel musical for yourselves and perhaps even reflect on who you are and who you want to be. 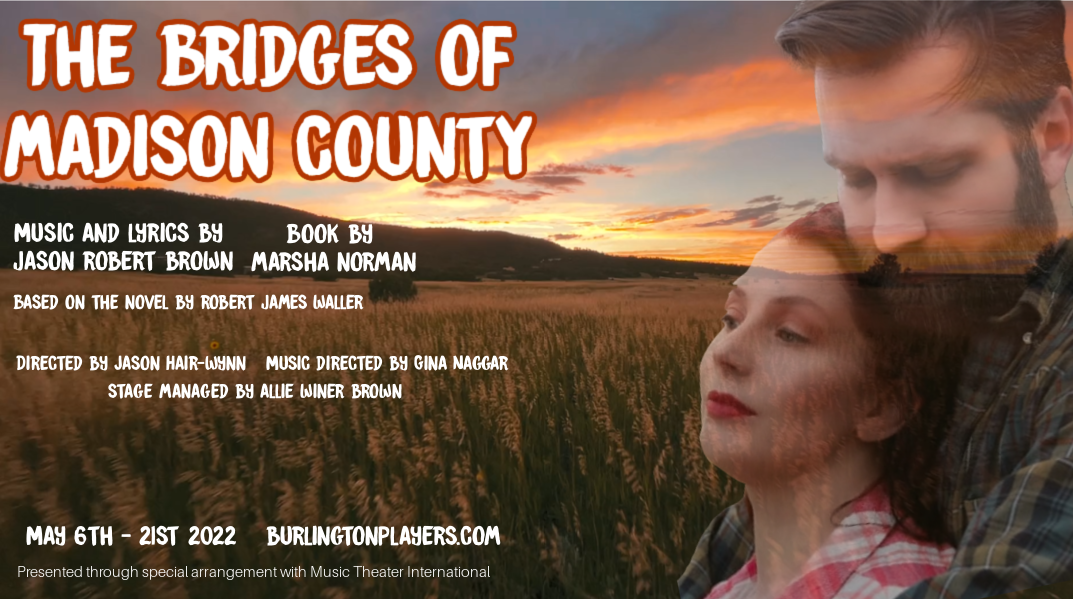 The Bridges of Madison County is a musical, based on Robert James Waller's 1992 novel, with a book by Marsha Norman and music and lyrics by Jason Robert Brown.

Francesca, an Italian war bride living in Winterset, Iowa in 1965, has had eighteen years of quiet, largely unfulfilling farm life.

After the family departs, Francesca is planning a relaxing weekend free from responsibilities.

That afternoon, a blue pick-up truck pulls into her driveway carrying Robert Kincaid, a photographer for the National Geographic who has travelled from Washington State to photograph the famous covered bridges of Madison County.

Robert is unable to find the seventh covered bridge, the Roseman Bridge, and Francesca agrees to accompany him to the bridge for a short scouting trip.

Once at the Roseman Bridge, Francesca feels something developing between her and Robert.

The Broadway production was directed by Bartlett Sher and starred Kelli O'Hara as Francesca and Steven Pasquale as Robert.

Brown's work on the musical won the 2014 Tony Awards for Best Original Score and Best Orchestrations.

For the safety of our cast, crew, and audience we will be requesting proof of vaccination and that masks are worn by audience members and staff while in the theater. 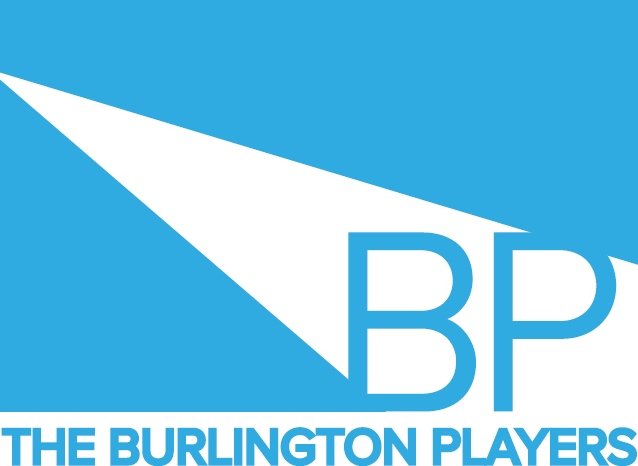 The Burlington Players (BP) is an all volunteer, adult theater group open to those ages 18 and over, and there’s room for you too! Experience in performing or technical theater is certainly welcome, but not necessary. We’ll happily mentor anyone who wants to learn any aspect of theater. The Burlington Players usually produces a four show season each year

There's fun and entertainment for everyone!