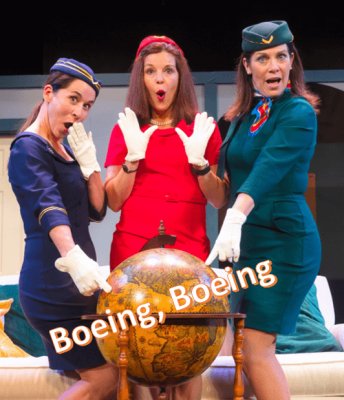 PUTNAM, CT: “Boeing Boeing” by Marc Camoletti. Presented by the Theatre of Northeastern Connecticut (TNECT), 30 Front Street, Putnam, Ct. 06260. Performances: Jan. 25, 31 & Feb. 1 at 7:30pm, Jan.26 & Feb. 2 at 2:00pm. Tickets are $21 for adults and $17 for seniors and students. Reservations may be made with a major credit card online at www.thebradleyplayhouse.org or by calling 860-928-7887. Tickets may be purchased at the theater box office, either before the performance or at the door if available.

Written by Marc Camoletti. Translated by Beverly Cross and Francis Evans. Directed by Kathleen Atwood and Scott A. Guertin.

The Theatre of Northeastern Connecticut at the Bradley Playhouse (TNECT) presents “Boeing Boeing,” a riotous comedy about a bachelor engaged to three women, all of whom are unaware of each other, and he is about to encounter some major turbulence trying to keep it that way.

The two-act show is a 1960 French farce by Marc Camoletti adapted for the English-speaking stage by Beverly Cross and Francis Evans.

American lothario Bernard (Dan Healy) lives in a beautiful apartment in Paris. He has a live-in housekeeper, Berthe (Tonya Leigh Brock), who helps him maintain his crazy, preposterous charade with his Italian, German, and American fiancés.

The three unsuspecting women are all attractive airline hostesses: Gabriella (Kelly Madenjian) is the Italian, Gretchen (Alison Wiza) is the German and Gloria (Christine Healy) is the American.

Being set in the 1960s the women depicted here wear sexist uniform attire common to the era and hardly seem representative of today's flight attendants.

Thanks to the fact that the women all work for different airlines, their scheduled “layovers” never seem to overlap, which is how Bernard has been so successful in keeping them from bumping into one another.

So, as Bernard entertains one in his luxurious apartment, the other two continue to fly  their friendly skies oblivious to Bernard’s scheme. That is until the newer and faster Boeing airplanes launch and throw Bernard an unexpected curve ball.

The air hostesses encounter some turbulent schedule changes bringing all three to Bernard’s apartment at the same time.

In addition, Bernard's friend, Robert (Dave Ring), comes to visit and is invited to stay at the apartment by Bernard. Robert inadvertently becomes entangled in trying to maintain Bernard’s shameful secretive arrangement.

First - Yes the show is sexist. Incredibly, insultingly sexist. But the sexual farce also shows the three women as fiercely independent, competent and strong-willed. More than a challenge for Bernard and for Robert as things begin to unravel for them. The stress culminates finding them both suffering from their own form of mutual "air sickness" from within the confines of the apartment.

Brock as Berthe has some of the show’s funniest moments as she also must aid in Bernard’s shoddy intentions.

Yes, Camoletti’s play is 60 years old (and 40 minutes too long) and the concepts are quite antiquated now.

However, under the direction of Kathleen Atwood and Scott A. Guertin, those concepts are well counter-balanced by the strong-willed nature of the women, ably portrayed by Madenjian, Wiza and Healy.

The set by Jason Preston was outstanding and all six doors required (in addition to a main archway entrance) were all fully functional.

The women were dressed appropriately in their form-fitting uniforms. However, during a couple of points in the play, it felt strange that the women would take baths and then put on the exact same flight uniforms again almost immediately after bathing.

Costumes were more basic but also a bit more anachronistic for the men as they appeared a bit too contemporary and less coordinated for men’s 60s fashion.

Overall the play, especially during the second act, provides an evening filled with flighty entertainment and many honest belly laughs.

The show runs approximately two hours 40 minutes with one intermission.