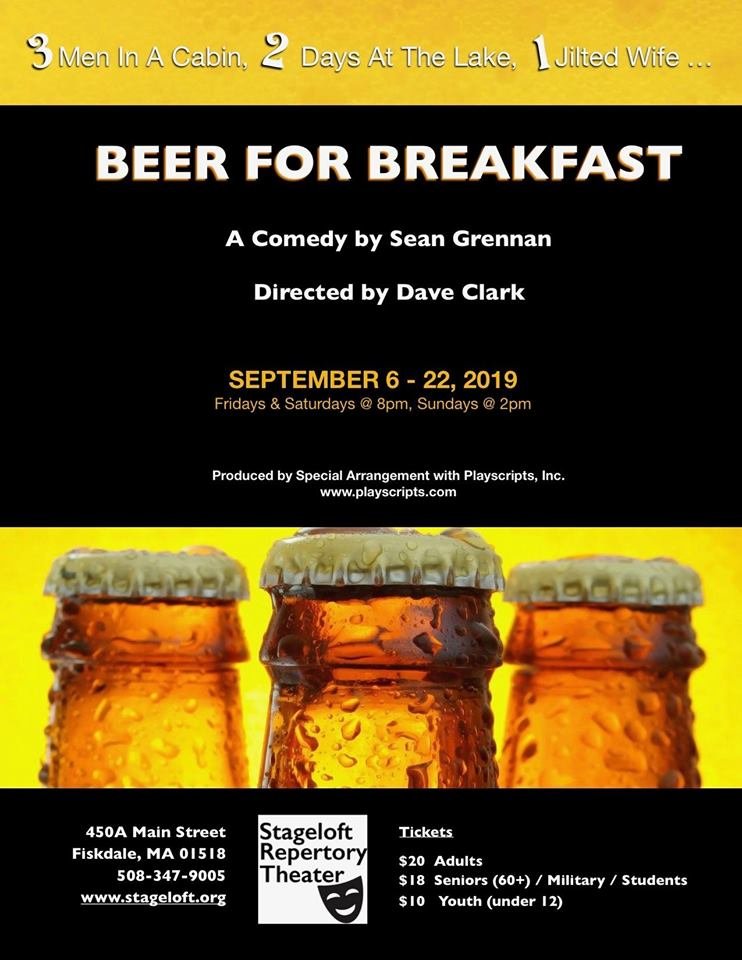 STURBRIDGE, MA. - With Stageloft Repertory Theater’s “Beer for Breakfast,” not only is the beer on tap so are the laughs.

Four lifelong old(er) male friends reunite at a cottage for a “guys’ only weekend,” isolated by snow.

However, their expectation for catching up, while simultaneously gorging their bellies with the unhealthiest of foods and beer, is derailed by the appearance of (gasp) a female.

The owner of the cottage, their expected fourth friend, Adrian, does not show. Surprisingly, though, Adrian’s wife, Jessie (Robin Shaye), arrives to the cottage instead.

The men are stunned and, knowing how intimidating Jessie can be, are less than enthusiastic by her arrival.

Now the trajectory of their entire weekend must be altered to accommodate their friend’s spouse and none of the men seem well-equipped to handle the task. Soon, they find themselves snowed in and also engaged in a battle of the sexes with Jessie.

Although this is familiar fare (sitcoms have repeatedly covered this same premise since the old “I Love Lucy” days), Grennan’s basic structure, via his cleverly written dialogue, well illustrates the interpersonal relationship of not only these three men but men in general.

It shows how, while women are believed to be the sex tending to seek out deep bonding relationships, men, too, may have such a need for similar soul-sharing companionship. And this particular woman, to these men, upsets the projected course of this weekend of such bonding.

Though some subjects may seem insipid at times, to these men, it is the ongoing conversation that truly matters, not the content.

While now well into their 50s, the friends still cling to the idyllic nature of their youth. Soon, though, they recall the events of the past in far greater accuracy and discover the past may not have been so ideal after all.

Dave Clark is the driving force behind the show, not only as T.J. but also as the show’s director, and the single-set, two-act comedy is quite well executed by the entire ensemble. The show’s second act lingers far too long, but the humorous ending is quite a satisfying payoff.