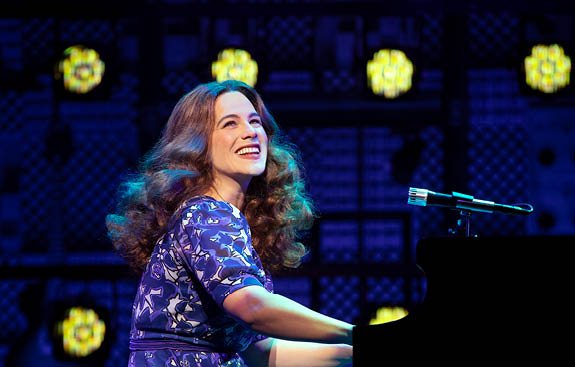 The Hanover Theatre for the Performing Artsd kicks off its 2019-2020 season on a high note with “Beautiful: The Carole King Musical,” a bio-musical featuring a book by Douglas McGrath that tells the compelling story of the early life and career of singer-songwriting legend Carole King (Kennedy Caughell). 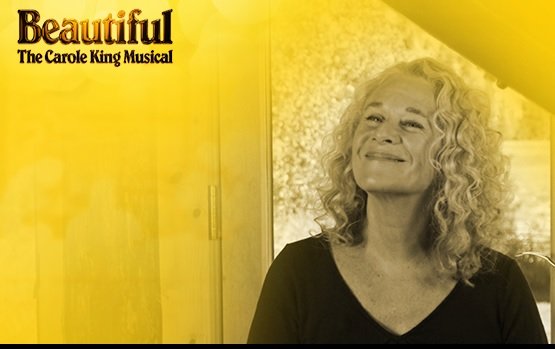 Photos of Carole King and "Beautiful - The Carole King Musical"
courtesy of beautifulonbroadway.com Premiering on Broadway in January 2014, the show won both Tony and Grammy Awards.

The outstanding cast of this new tour, under the direction of Marc Bruni and a solid creative team, brings a vivacious energy to the catalog of King, who not only wrote many tender ballads (“You’ve Got a Friend,” “Will You Love Me Tomorrow” and ”(You Make Me Feel Like) A Natural Woman” as examples) but also some memorable rock standards, as well (“Pleasant Valley Sunday,” “I Feel the Earth Move” and “The Locomotion”).

There are two basic types of “jukebox musicals.” The first tends to involve a contrived, (usually) ridiculous, flimsy plot designed to string a catalog of songs into a show.

The more effective alternative (again, usually) involves telling the biography of the composer/artist involved in the songs and, in the case of “Beautiful,” this show tells the story of the multi-talented King. Caughell provides an extraordinary homage to King in her performance.

Even with biographical stories, which have a reverential through line of truth for the artists in question (“Jersey Boys,” “The Cher Show,” “On Your Feet”, to name a few), the biggest complaint critics have for most jukebox musicals is that they lack substance.

Not so with “Beautiful,” thanks, in part, to McGrath’s book, but mostly because of King herself, who was not born to follow any career path but the one she managed to navigate on her own at an early age (16) with and without songwriting partner and future husband, Gerry Goffin (James D. Gish).

Gish gives a dynamic, multi-layered portrayal of the troubled Goffin, who struggled with drugs and other personal demons.

Rachel Coloff plays King’s mother, Genie Klein, and, while she plays a fairly stereotypical overprotective Jewish mother character, she is still quite hilarious.

The score contains not only music by King and other legendary songwriters, but also meticulously crafted orchestrations, vocal and music arrangements provided by Steve Sidwell and additional arrangements by Jason Howland.

The ensemble, who also serve as pivotal characters in the Goffin-King professional and personal history, seamlessly execute the material to perfection, all while doubling as stage crew to help the story move fluidly from scene to scene.

The career of King, Brooklyn-born as Carole Klein, is a relevant subject for a musical, as she would help to score much of the ’60s and ’70s.

Matt Loehr portrays music mogul Don Kirshner, who gave King her first big break and, as written here, Kirshner comes across far more amusing and animated than the dour, monotone, droopy basset hound-faced host many might recall from his “Rock Concert” television show from the ’70s.

King’s music, especially when using Goffin’s distinctive lyrics, reflected a changing perception of women of all ages, who were seen emerging more and more from relegated lives in suburbia, which, perhaps to some, felt like their own private “Pleasant Valley Sunday” hell.

Young women, in particular, felt they had more to contribute to the world. Here, ironically, it is Goffin, as shown in the musical, who finds himself struggling with life in suburbia, leading to an ultimate turning point in their marriage.

As described in the lyrics of the aforementioned Monkees’ hit, suburbia meant “Rows of houses that are all the same, and no one seems to care” as “Mothers complain about how hard life is, and the kids just don’t understand.”

Bob Dylan would point out, the times they were a changin’. And many women were seeking that “one fine day” in their lives when they would find much longed for “elements” within their own truth to help them feel like more “natural women” as opposed to the female roles 20th-century society had dictated.

Many women found those “elements” contained within the lyrics of King’s music, especially songs from her iconic “Tapestry” solo album.

These women discovered they, indeed, had a “friend” in King and that their friend was telling them it wasn’t too late to see their lives fulfilled. These were the songs played in “Beautiful” and were recognized and appreciated immediately by the audience.

Outside of the songs that King wrote, many with Goffin, the show features other compositions by fellow legendary Brill Building songwriters Barry Mann (James Michael Lambert) and Cynthia Weil (Kathryn Boswell), among others. There is an explosion of musical highlights early in the show, which is thoroughly enjoyable to those familiar with many of these classic hits.

Lambert and Boswell as composers Mann and Weil also supply some highly humorous and musical highlights during the show. The duo were true pioneers of ’60s music and, like Goffin and King, the success of their collaborative contributions cannot be overstated. We see the two sets of songwriting duos not only as competitors, but collaborators and friends, as well.

The musical showcases songs written for top music acts such as The Drifters (Isaiah Bailey, Edwin Bates, Torrey Linder and Ben Toomer), the Righteous Brothers (Matthew Amira and Nick Moulton), The Shirelles (Antoinette Comer, Nya, Nazarria Workman and Hailee Kaleem Wright), Little Eva (Nya) and more. Every single song is a joy to experience, thanks to the phenomenal cast.

In the ’80s, long before the term “jukebox musical” was coined, some may recall a similar show constructed around the songs of Ellie Greenwich, “Leader of the Pack,” which denoted her struggling relationship with then husband Jeff Greenwich. In many ways, “Beautiful” owes a tremendous debt to that production but, in many ways, “Beautiful” surpasses it, as well.
In addition to her stellar voice, what shines through most in Caughell’s portrayal of King is not only King’s talent and versatility, but also her compassion, strength and vulnerability.
As adversities befall her throughout the show, we come to learn that King was not only a talented composer, not only a resilient artist, not only a great collaborator, she was (and also remains) a fascinating, engaging and persistent presence in world of music.

Truly, with its gifted cast and creative team, “Beautiful” is “some kind of wonderful” jukebox musical bursting with great substance.

The musical is appropriate for the entire family, but best suited to pop music lovers ages 10+