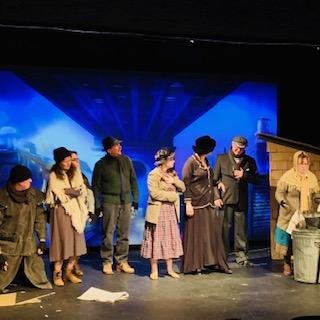 For Calliope Productions “Tomorrow” is yesterday with “Annie”

Calliope Productions latest musical staging of the musical “Annie” deserves an “A” for effort in getting audiences coming in after perhaps a long, dismal, dreary wintry week and to leave with a smile. It is a tall order and, on many levels, they do succeed.

The show has an inherent and infectious leaning toward optimism stemming from the iconic act one musical number, “Tomorrow,” which sung by one of two leading “Annies” appearing in the show (in this instance, Lily McEvoy).

The song is given a reprise later in the show by the then-American President Franklin Roosevelt (Ben Smith) and his cabinet members in one of the show’s funniest scenes.

“Annie,” with its book by Thomas Meehan and score by Charles Strouse, is the story of a young orphan, Annie, who exists (hard to call it “living”) in a dismal orphanage run by the equally dismal Miss Hannigan (Marina Matuzek).

Hannigan loathes children, particularly “Little Girls” which she sings about in the show’s first act.

The songs by Strouse are iconic, not only moving the story along but giving the audience a great sense of the harsh economic times of a bygone era, in this case, the Great Depression.

The ensemble performs well in the contrasting songs “Hooverville” as the little orphan Annie escapes the orphanage and meets the homeless citizens of the previous Hoover administration; and then, later, in the more upbeat “I Think I’m Gonna Like It Here,” in which Annie meets billionaire Daddy Warbucks (Keith Wolosz), and his staff, and is amazed at the mansion in which she will be spending the holidays.

The members of the ensemble portraying multiple characters including Warbuck’s staff perform all that is required of them admirably, especially Drake the butler (Matthew Cory) who has some of the wittiest retorts in Meehan’s script.

Annie is taken from Hannigan’s orphanage to the mansion by Warbuck’s assistant, Grace (Bethany Killeen) who immediately takes a liking to Annie, as does Warbucks and his entire staff.

Both Wolosz and Killeen have good moments in the show but have very little on stage chemistry, so any alluding to a romance between the two characters is all but abandoned in this staging.

Annie’s friends and fellow orphans are a highly energetic and tightly nit group, pushed even tighter on stage due to a claustrophobic orphanage set which severely curtailed any choreography by Karen White. They perform their best number in the second act’s “Never Fully Dressed Without a Smile.”

This was a recurring issue throughout the show as even one set piece on the limited stage space cramped any of the group numbers.

Overcoming these obstacles, the musical performances by the cast are all solid, especially young McEvoy as “Annie,” who could definitely belt out when required, but did occasionally have difficulty sustaining some of the higher notes in the iconic material.

Musically, under the direction of John Leslie, the musicians seemed to have issues keeping a proper consistent tempo throughout the show. At times, music seemed rushed as some of the cast visually did not seem to know when to come in singing.

The second act was musically much stronger and more consistent than the first, so it could be just more time was needed for everyone to get in ‘sync’ with one another.

Other comedic highlights included Matuzek as Hannigan whose portrayal was brought to the fore once her con-artist brother, “Rooster,” played by Todd Vickstrom, arrives at the end of the first act with his girlfriend, “Lily” (Tracy Martino) in tow.

The trio gave a riotous performance as they hatched a ridiculous plan to con Warbucks into giving them money for Annie during the hilarious song, “Easy Street.”

Costumes by Donna Reidy were varied, colorful and perfectly appropriate to the time period. Lighting, sound and special effects were expertly executed by Dave Ludt and Bob Reidy.

When the cast was given enough space on stage to really cut a rug that is when the show really came alive and had some of its best moments.

Overall, it was the enthusiasm of the cast from “head to toe” which elevated the show and which left the audience very much leaving with a smile “ear to ear.”