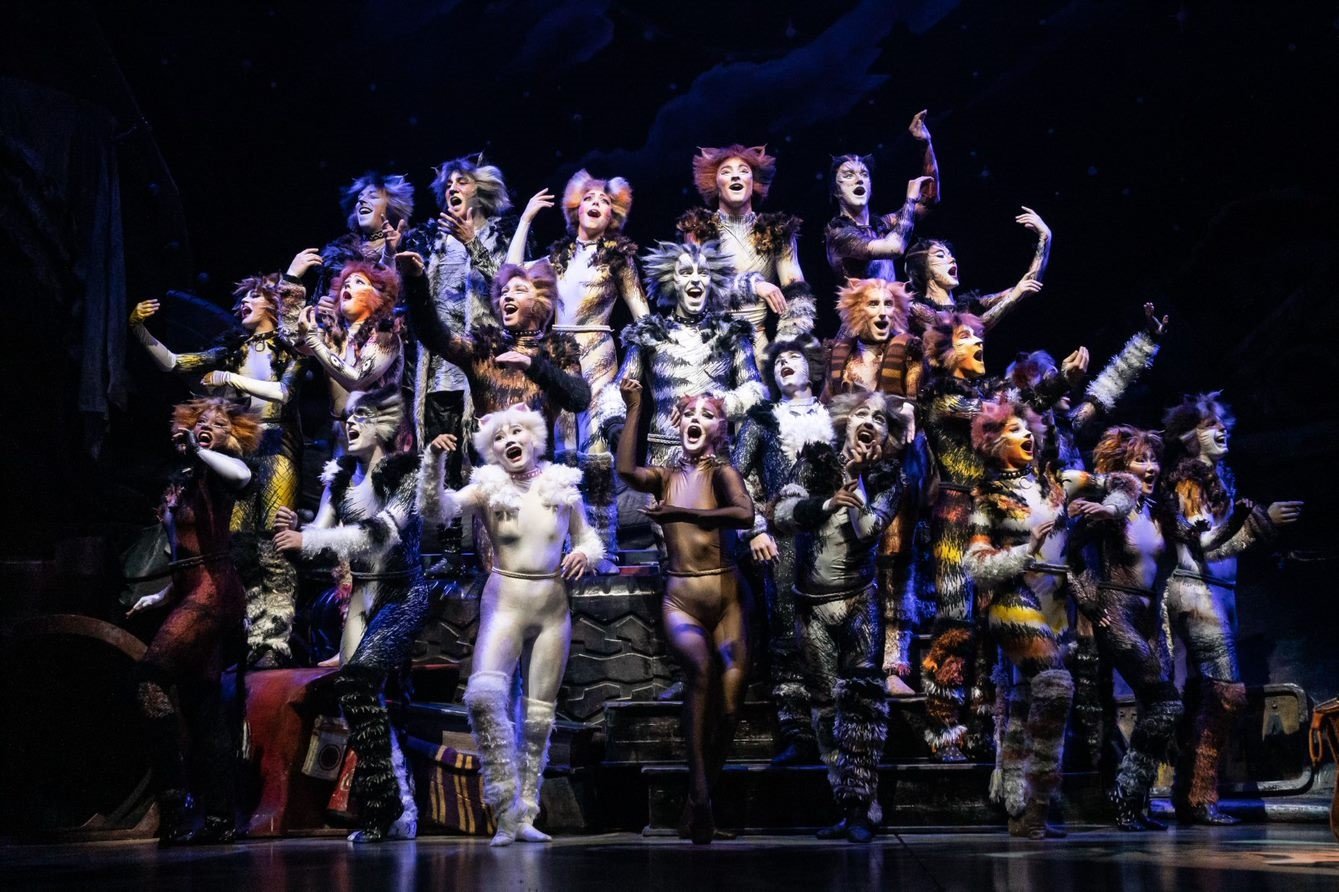 (PHOTO: Company of the 2021-2022 Tour of Andrew Lloyd Webber musical "CATS" coming to the Hanover Theatre in Worcester, MA. March 3 through March 6, 2022. Photo by Matthew Murphy.)

Returning to the Hanover Theatre is the iconic musical "CATS" with an inspired score featuring one of the most treasured songs in musical theatre, “Memory.”

While winner of seven Tony® Awards including Best Musical, "CATS" has not always been a critics darling.

The musical tells the story of an extraordinary tribe of cats assembling for an annual ball to dance, sing, celebrate - and decide on which cat will be next among them to be "reborn."

Detractors of the show have derided it, noting its structure as more concept than plot with the "conceptual plot hole" filled in by a wild, almost festival-like atmosphere. These would be the same people who, every ten minutes or so, on the average, would be looking up at the stage, shaking their heads saying, "I have no idea what the (expletive deleted) I am watching."

Yet, those who adore both the show and its creator, Baron Andrew Lloyd Webber, are steadfast, true, loyal to a fault. These would be those people in the audience who accept whatever is being presented and enjoy everything as it unfolds, no questions asked.

This loyalty might best connect with the underlying message of the Baron’s show and its homage to the work "Old Possum's Book of Practical Cats" by T.S. Eliot.

There is a final group of attendees which would be those in the audience who find themselves somewhere in the middle of the previous two groups and saying, "I have no real clue what the (expletive deleted) is going on here...but I do know I AM enjoying it...whatever 'it' is."

It really depends on if you are willing to allow yourself to be engaged - not by traditional storytelling - but instead agree to be moved by the impeccably crafted music and choreography conveying the musical's message, which is one of acceptance, family and unity.

It truly is a stunning show with clever staging, special effects wizardry and choreography that is both alluring and a visceral treat.

Personally, though, I still prefer a more conformist musical format but can also still recognize and appreciate "CATS" for its concept (if not put the show among my list of top ten favorite musicals).

The stage is a technical marvel, filled with a dazzling display of cleverly placed lights which illuminate the backdrop of a junkyard.

As the musical begins, scattered and skulking among the debris, we see some fleet-footed felines. They are not there to prey upon the nerves of a mouse or two, nor are they there to seek their latest meal.

No, this night is that special time (at least as we are led to believe as we buy into the show's premise) when this particular tribe of "Jellicle Cats" gathers to 'step out' (and stand up on their hind legs and dance like nobody's business). They await for their leader, Old Deuteronomy (Indalecio De Jesús Valentín), to choose which one of the "CATS" will journey to the 'Heaviside Layer' to be reincarnated.

Among some of the more fantastical "CATS" stories include the musical tales of "Rum Tum Tugger" featuring a wonderfully flamboyant performance by Zach Bravo; "Gus the Theatre Cat" as performed by John Anker Bow, whose charisma steals most of the second act; and "Macavity the Mystery Cat," about a pernicious pussycat (Aiden Pressel) who does not appear in the song but rather his tail...uh, tale...is told by the duo of femme fatal felines, Demeter (Lauren Louis) and Bombalurina (Chelsea Nicole Mitchell).

"CATS" has other musical high points to commend its dynamic cast. A favorite among "CATS fanciers" is the high stepping (or "high paw-ing") ensemble number "Jellicle Ball."

Finally, the show's staple song, “Memory,” has always been considered, by many, to be the musical high point of the show. This status is undiminished thanks to the near 'purr-fect' rendition by Tayler Harris, aka "Grizabella, the Glamour Cat." Her performance honors the legacy set over 40 years ago by stage legends Elaine Paige and Betty Buckley.

This is definitely a welcome return of live Broadway level performances to the Hanover Theatre. A practical suggestion for those planning to attend would be to allow some additional time for parking as the show does start on time as scheduled. Also, a negative Covid test or proof of vaccination and masks are still required at the venue .

Enjoy the music and dancing and try not to overthink the story. You'll have a great time.

"CATS is back and better than ever!" The Huffington Post

Audiences and critics alike are rediscovering this beloved musical with breathtaking music, including one of the most treasured songs in musical theater, “Memory.”

Winner of seven Tony® Awards including Best Musical, CATS tells the story of one magical night when an extraordinary tribe of cats gathers for its annual ball to rejoice and decide which cat will be reborn.

Not ready to commit to seven shows? Choose four or more Broadway shows and save 10% with our FLEX packages.

Groups of 10 or more save! Book your group early and save at least 10% PLUS all handling fees!

Reserve your seats here with no deposit.