"A Walk in the Woods" - Calliope Productions - REVIEW 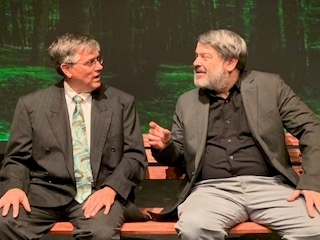 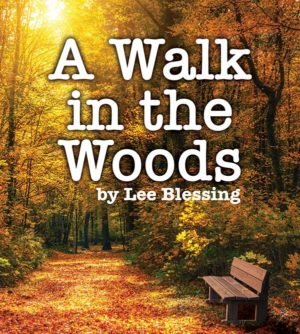 One empty stage save for a video screen along the back wall and a single bench. Two men on stage for two solid hours conversing over multiple subjects while, all the time, working toward a single objective…peace. All told over the course of four seasons in Calliope Productions latest offering, “A Walk in the Woods.”

John Honeyman, (Ed Moynihan) an American, is a newly assigned arms negotiator who must settle treaty terms of a major peace initiative with Andrey Botvinnik (David Nestelbaum) a veteran Russian negotiator who is more cynical of the process but continues with the peace talks because he “likes” Honeyman and his idealism.

Blessing’s rhythmic dialogue is both dated yet timely, witty from beginning to end, moving back and forth from comic to maudlin, yet consistently engaging.

The peace talks begin in an early 1980s summer in Switzerland and the two global superpowers representatives take a break from the table talks and, instead, literally go for a “walk in the woods.”

They begin, at Botvinnik’s behest, to talk about an array of subjects NOT related to the treaty. This is a concept Honeyman rebukes from the start, believing their mutual mission is to help their two nations, easily capable of annihilating one another dozens of times over, to reach agreement for the treaty.

Botvinnik figuratively presses on every nerve on Honeyman as summer moves to fall and then to winter...perhaps the winter of these nations’ reciprocated discontentment. 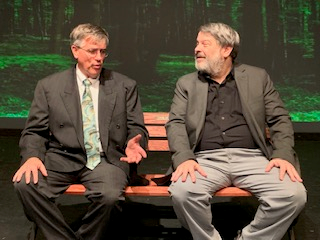 Ed Moynihan and David Nestlebaum in "A Walk in the Woods".
Photos courtesy of David Ludt, Calliope Productions

Moynihan gives an earnest yet thoughtful performance as Honeyman, who tries to stay on topic throughout the show, but is riddled by his own conservative hang-ups in every word and gesture.

Conversely and intentionally, Nestelbaum, as Botvinnik, oozes an infectious charm on stage and the joviality of the character seems to pour out so easily through his affable performance.

Yet, can these two characters, enemies (if only on paper) truly become friends? Do they even trust one another? That is not only a question for these two men from the past. It is also for the audiences of today to ponder as political relations between the US and…well, just about everybody else...continues to become more estranged.

Calliope’s Dave Ludt has directed a solid production of Blessin's manic material which was nominated for a Tony Award and Olivier Award and as a finalist for the Pulitzer Prize.

In this intimate production with bare-minimal staging, it is the words spoken, the topics discussed, the topics avoided, and a relationship that evolves (not to overlook a little thing like the fate of the world) that all propel “Walk in the Woods”.

Idealism and cynicism continue to collide as winter turns to spring where the show concludes. As weapons are armed and aimed at and by these two superpowers, peace rests squarely on the shoulders of these men and they MUST find common "ground" in the woods.

There were a couple of hiccups during this performance. The first resulted from some occasional line stumbles, predominantly in Act One. Secondly, there was a brief but major technology malfunction during the second act.

But the actors were steadfast in their presentation and, overall, had great chemistry on stage. Scene transitions were a bit long as the two actors needed to adjust costumes for the “change of seasons.”

However, in the end, much like the hyphen engraved in between the birth and death dates on a headstone, while the “walk” and “woods” were both crucial, it was what occurred “in between” that mattered most in this effectively staged production.