"A Christmas Carol" - Hanover Theatre for the Performing Arts - REVIEW 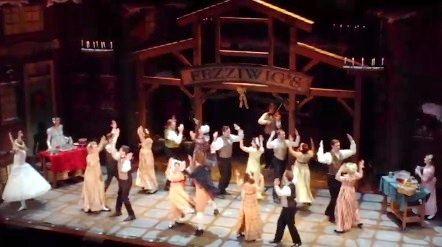 During his eight seasons as “Scrooge” for the Hanover Theatre’s annual production of “A Christmas Carol,” actor Jeremy Lawrence has brought a witty, curmudgeonly, idiosyncratic take to the old miser in Charles Dickens’ tale of redemption.

However, in this adaptation written by Troy Siebels, Lawrence also brought to the role an element of humanity as Scrooge undergoes his incredible personal transformation.

This year, as has been the case since the annual staging began, Siebels’ adaptation presents a simplified rendition of the Dickensian story with the ensemble serving as narrators.

Simultaneously, the variation also provides a complexity in the way the story unfolds through use of impressive special effects and resourcefully constructed scenery of a small populace in 1800s London.

Always using traditional holiday carols to help move the story along, the cast is quite effective due to Siebels’ clockwork staging and the established choreography of Ilyse Robbins.

Scrooge’s deceased business partner, Jacob Marley (Marc Geller), comes to issue a warning to Scrooge that he will be ’visited” by three ghosts: the Spirits of Christmases Past (Kylie Benoit), Present (Christopher Chew) and “Yet to Come” (Mark Linehan). 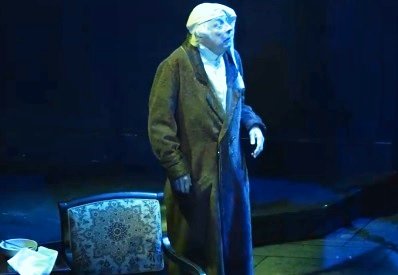 Jeremy Lawrence as "Scrooge" in the Hanover Theatre production of "A Christmas Carol".

As has been the case since Lawrence began the role of Scrooge at the Hanover in 2012, he has terrific interactions with all of the actors and ensemble.

Siebels has changed certain elements in scenes and most are hardly noticeable. However, those that are noticeable are quite welcome.

In particular, in previous year the primary Narrator of the show, names "Timothy" (Bill Mootos), at the end of Act One, elicits a sinister laugh which has been replaced. This seems like a good call since, once the identity of “Timothy” is revealed at the end of the show, when one recalls that particular moment, it seems highly out of character.

The ensemble voices, under the musical direction of Timothy Evans, seemed as strong as ever.

The show has become a holiday tradition and one well worth continuing. However, change is a constant in any working relationship, and Lawrence will exit the Hanover family after the final “Christmas Carol” curtain closes this year.

Yet Lawrence’s humanizing portrayal of “Scrooge” is one many have come to look forward to over the past eight Christmas seasons and one that will surely be missed.