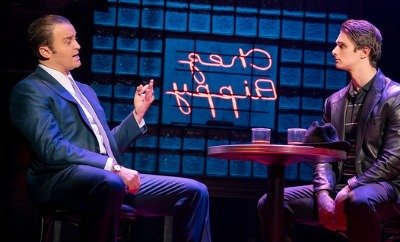 “A Bronx Tale,” now playing at the Hanover Theatre, is billed as “Jersey Boys” meets “West Side Story.” However, the musical has such a multitude of elements that it recalls a number of other shows, as well.

In fact, the show could easily be billed as “Jersey Boys” meets “West Side Story” meets “Newsies” meets “Rocky” and then, unfortunately, ultimately collides with “Saturday Night Fever the Musical.”

The show is based on the 1993 movie of the same name written by Oscar-nominee Chazz Palminteri and which co-starred Palminteri with Robert De Niro, who directed.

The story is based on Palminteri’s true life story as he grew up on the stoops of the Bronx in the 1960s. As the show begins, there is a doo-wop quartet harmonizing around a street lamp, certainly reminiscent of “Jersey Boys.”

There are so many positive and praiseworthy aspects to the show it is hard to pinpoint exactly where it goes wrong, but it does and spectacularly so.

However, focusing on the positives first, where it goes right is in the performances, as every single cast member gives their level best.

Calogero or “C” (played as a kid at this performance by Trey Murphy and as an adult by Alec Nevin), is a son caught between the honest, hard working bus driver father he loves, Lorenzo (Nick Fradiani), and the neighborhood gangster, Sonny (Jeff Brooks), whose power he respects and admires.

Nevin is clothed reminiscent of a young “Rocky Balboa” wearing a leather jacket and dark colored stingy-brim wool fedora throughout most of the show. He also comes across sometimes like the character Tony Manero from “Saturday Night Fever” which had a cringe-worthy musical adaptation. We’ll come back to that later. 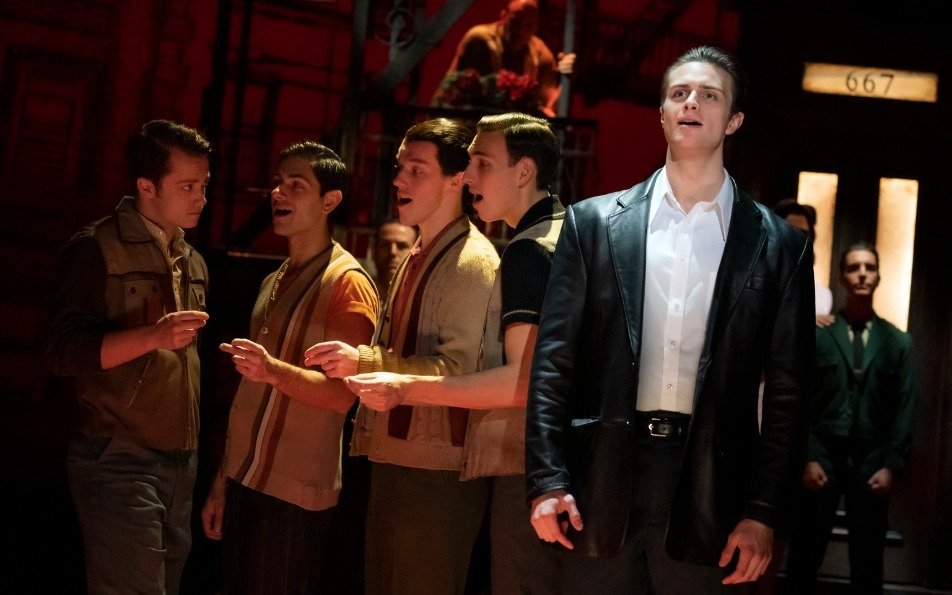 Alec Nevin and the cast of "A Bronx Tale" at the Hanover Theatre.
Photo credit to Joan Marcus.

Nevin is very charismatic on stage and does well functioning both as “C” carrying the bulk of the show’s best songs in the first act and serving as narrator of the story.

Fradiani is a fine counter to Brooks portraying Lorenzo as the moral compass of the story and trying desperately to keep his son away from Sonny’s influence.

But it is Brooks as “Sonny” who is thoroughly dominating on stage, fully embracing the character and providing many of the show’s best moments.

Also worthy of high praise is Kayla Jenerson as “C”’s love interest, Jane, who has some of the show’s best songs in the second act.

All give dynamic performances. Young Murphy has an astounding vocal range which is showcased well in the Alan Menken score, especially in the song “Look to Your Heart” with Fradiani and with the ensemble in “I Like It.”

The ensemble provides numerous inventive, high-energy dance numbers (a la “West Side Story”) from the beginning of the show based on Original Choreography by Sergio Trujillo and recreated by Brittany Conigatti.

The intricate set design by Beowulf Boritt filled the entire Hanover stage with very little wasted space, although, occasionally, it was so heavy on scaffolding it was reminiscent of the Broadway adaptation of “Newsies the Musical.”

So, with so many positives where does the show come up short? Unfortunately, the problem centers on the creative collaboration between Palminteri and Oscar and Tony Award-winning composer Alan Menken.
Similar to the abysmal failed experiment that was “Saturday Night Fever the Musical,” the creative team for “A Bronx Tale” (which also included Tony Award-nominee Glenn Slater) chose to reduce the darker, grittier content of the 1993 movie for a more upbeat stage musical and it just does not work. Menken's score "washes away" most of Palminteri's the grittier material.
It feels like watching two events, a play and a concert, both sharing the same name, but which don’t connect at all.
Palminteri’s original screenplay was focused on showing a world that was tearing a father and son apart and that crucial plot component is far too reduced to instead showcase Sonny and his collection of goofball gangster cohorts as if they were a new generation of “Bowery Boys.”
When the musical begins, someone gets shot in the head in the first five minutes. To almost immediately move from that to more playful lighthearted wiseguy hi-jinks is unsettling.
Even a pivotal bar fight scene involving a biker gang, a compelling and violent moment in the DeNiro-directed film, comes across as pure farce as staged here.
In addition, Menken’s score is probably one of his weakest and derivative. For the man who has provided musical milestones on film and on stage (arguably) more so than any other contributing composer, this show provides not even one truly memorable number.
In the show’s final two songs, “In a World Like This” and “The Choices We Make,” both are so reminiscent of Menken’s music for “Newsies” you half-expect “C” to break out into a chorus of “Santa Fe.”
Looking past those things, for its overall technical achievements, and thanks to a principal cast and ensemble that give a hundred percent, “A Bronx Tale” is still a pleasant evening’s entertainment.
Note: There are loud sounds of gunshots during the performances and strong adult language is used.
The show runs approximately two hours 15 Minutes with one intermission.
Kevin T. Baldwin is a member of the American Theatre Critics Association (ATCA)
"The Children" by Lucy Kirkwood - SpeakEasy Stage Company - REVIEW
"The Lady Vanishes" by Derek Webb - Calliope Productions - REVIEW
"A Little Night Music" - GWO at Stageloft Repertory Theater - REVIEW