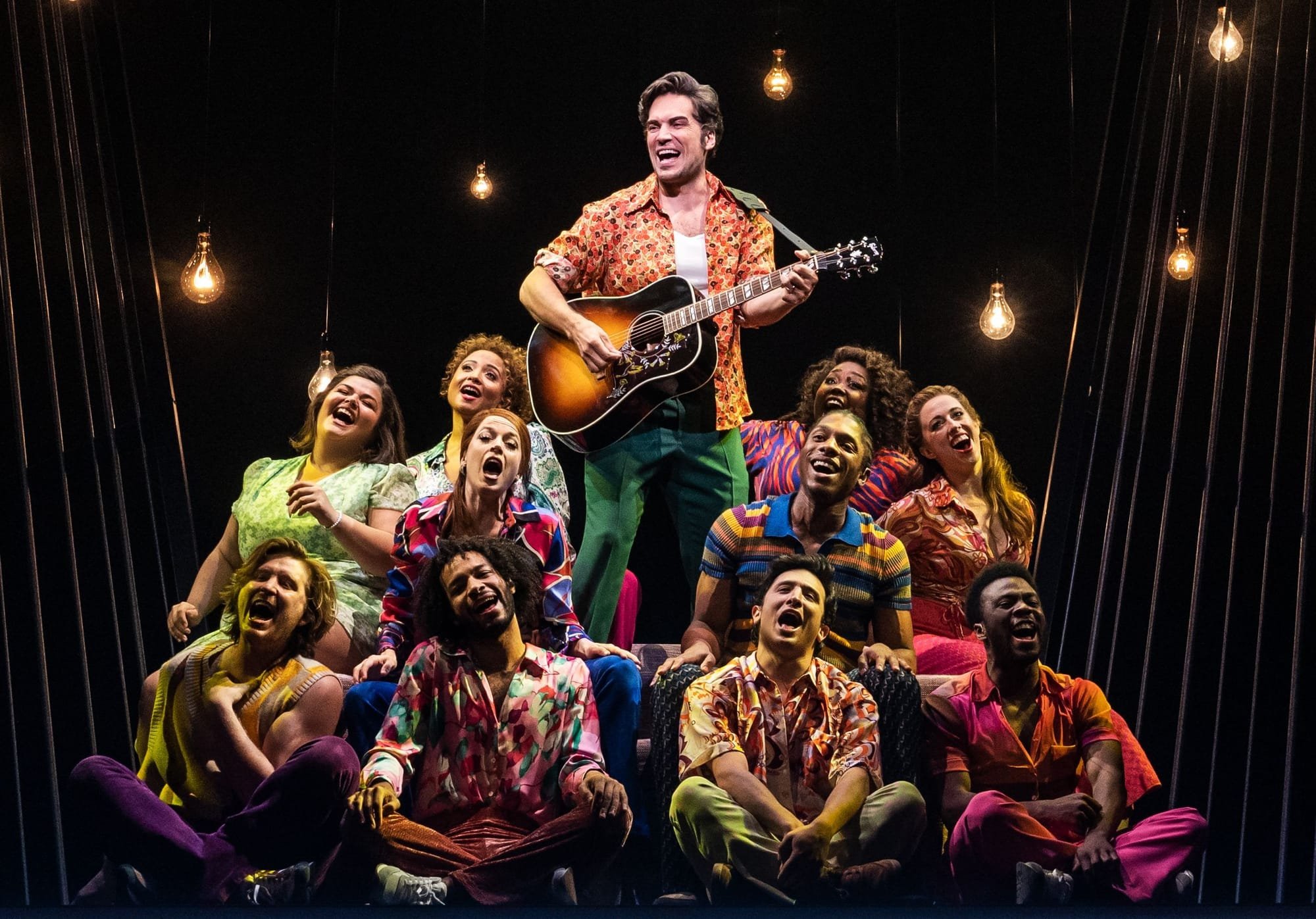 (COVER PHOTO: The CAST of the Neil Diamond musical "A Beautiful Noise," which runs through August 7, 2022 at the Emerson Colonial Theatre in Boston. Photo: Matthew Murphy)

Music and Lyrics By Neil Diamond

Neil Diamond commands the stage once more thanks to a stirring new musical, “A Beautiful Noise,” now playing at the Emerson Colonial Theatre in Boston before heading to Broadway.

Does it succeed? On almost every level, absolutely.

What distinguishes the musical from a Vegas-styled Neil Diamond impersonation “tribute” show is the book written by Anthony McCarten, with an intriguing premise and plot structure.

It is also elevated by the usage of not one but two adept actors serving as Neil Diamond “representatives” instead of just the one impersonator who is only required to capture the vocal and image…the “sense”…of Diamond in his prime.

In “A Beautiful Noise” we not only “experience” Diamond in his prime, we also witness and learn of the man and of the legendary writer and artist he would ultimately become.

The score features much of the Neil Diamond catalog with music supervision and arrangements by Sonny Paladino.

All the hits are here. So many, in fact, that, perhaps, subtracting a couple for the benefit of elevating the overall story wouldn’t be out of the question. More on that later.

In “A Beautiful Noise,” the Diamond character is referred to as “Neil – Now” and is played brilliantly by Mark Jacoby who adds multiple layers to the role of Diamond who faces a personal crisis for which he seeks help from his "Doctor" (Linda Powell).

The relationship between the two is not friendly but hardly contentious. They spend much of the show sitting across from each other in chairs (which, admittedly, distracted at times).

The Doctor seeks to help Diamond deal with his tremendous sense of loss as his decades-long career touring and performing on stage has reached a critical…and ultimate…impasse. (PHOTO: Mark Jacoby, Linda Powell seated in front of the ENSEMBLE of the Neil Diamond musical "A Beautiful Noise," which runs through August 7, 2022 at the Emerson Colonial Theatre in Boston. Photo: Matthew Murphy)

In his relentless performance, Jacoby does not try to impersonate Diamond but rather instead captures the essence of the man Diamond is today in 2022.

Under the capable direction of Michael Mayer, through a series of flashbacks on stage we view Diamond (aka “Neil – Then” played by the electrifying and charismatic Will Swenson) and his rise to fame as a singer-songwriter thanks, in part, to the initial efforts to one of the legendary talents of the Brill Building pop songwriting era, Ellie Greenwich (Bri Sudia).

Greenwich has not only been depicted in her own musical, “Leader of the Pack,” but was also featured as a pivotal supporting character in the more recent Broadway blockbuster, “Beautiful – The Carole King Musical.” Her contribution to this era of music cannot be understated, which is why her name keeps popping up in many of these shows.

In “A Beautiful Noise,” Greenwich helps Diamond (Swenson) land his first major writing hits for other artists and then helps him become a performer. He does so, reluctantly but, with prompting, soon becomes a sensational solo artist, signing with a successful upcoming record label run by some unscrupulous characters.

Throughout Act One we are treated to Diamond’s numerous early hits such as “Cracklin’ Rosie,” “Cherry, Cherry,” “Shilo,” “Song, Sung Blue” and the Act One closer and Boston audience favorite, “Sweet Caroline.” Just try and do a Neil Diamond musical, ANY Neil Diamond show, in Boston and NOT include that last song…do the words “General Custer” mean anything to you?

Here it was used as an exciting way to end the first act and left the audience simply begging for more of what would be delivered in spades during the second act.

Swenson does do the aforementioned “impersonation” of Diamond in his prime, which is spot on, but he also adds a strong element of vulnerability which followed the artist behind this music all throughout his esteemed career.

Yet, as the therapist discusses with “Neil - Now,” it is the lyrics which reveal his true vulnerability and point to a crucial moment in Diamond’s life which he has long suppressed and now must face. What that moment is? Well, you have to see the show in order to discover.

Another most impressive aspect to the production was the intricate choreography by Steven Hoggett which magnificently punctuated the mood of each musical number. The ensemble flawlessly executed the musical numbers. They do more than dance – the propel the story forward and make each number a joy to watch.

As a musical still in development prior to its upcoming Broadway premiere, the second act seemed much more balanced, much more technically “complete” than the first. While the set design and other technical elements for the second act certainly exceeds those used in the first, the overall set design, including an abundance of specialty lighting used, was exceptional. 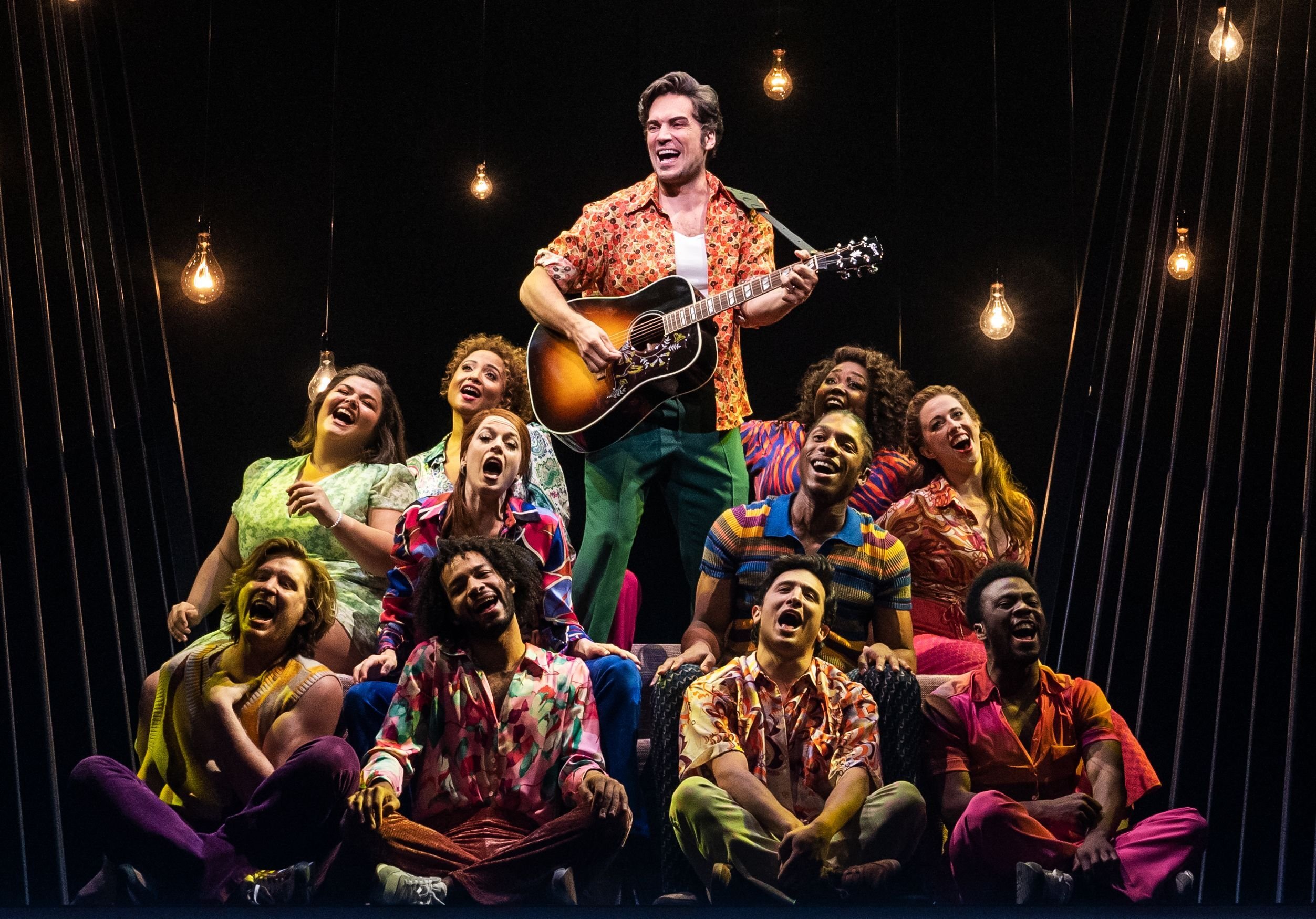 (PHOTO: Will Swenson and the ENSEMBLE of the Neil Diamond musical "A Beautiful Noise," now playing through August 7, 2022 at the Emerson Colonial Theatre in Boston. Photo: Matthew Murphy)

The first act contained certain familiar plot points seen in other rock icon musical biographies (“Beautiful,” “Summer: The Donna Summer Musical,” “Jersey Boys,” etc.), especially with the almost obligatory lonely first wife who becomes a “rock widow” as her husband’s fame soars and has to tour to maintain that notoriety.

Since the above is a theme all too familiar to most audiences, perhaps, instead of devoting a large chunk of the first act to the doomed relationship of Diamond and his first wife, Jaye (Jessie Fisher), a simple mention to the eventuality would have sufficed.

Cutting the character would also remove two songs, “September Morn” and “Love on the Rocks” which, while great songs independently, seemed absolutely crammed into the show, adding really nothing to the plot, lyrically, and also seeming way out of sequence considering the more chronological unfolding of the Act One playlist of musical numbers.

While Act One begins in a clever yet more subdued fashion, Act Two veritably storms the barricades with the visual spectacle of “Brother Love’s Traveling Salvation Show.”

The band, mostly obscured from the first act, is now in full view of the audience and delightfully so. They skillfully perform the Diamond catalog of songs used and had the audience captivated from the beginning.

One of the most surprising, jaw-dropping moments of the show came with the Act Two number, “Forever in Blue Jeans” which, amazingly, surpasses the original Neil Diamond song thanks to a vibrant new arrangement, amazing choreography and a powerhouse vocal performance by Robyn Hurder as Diamond’s second wife “Marcia.”

The only thing missing from the inspired new take on the song was anyone else featured in that number wearing…well…actual “blue jeans.” 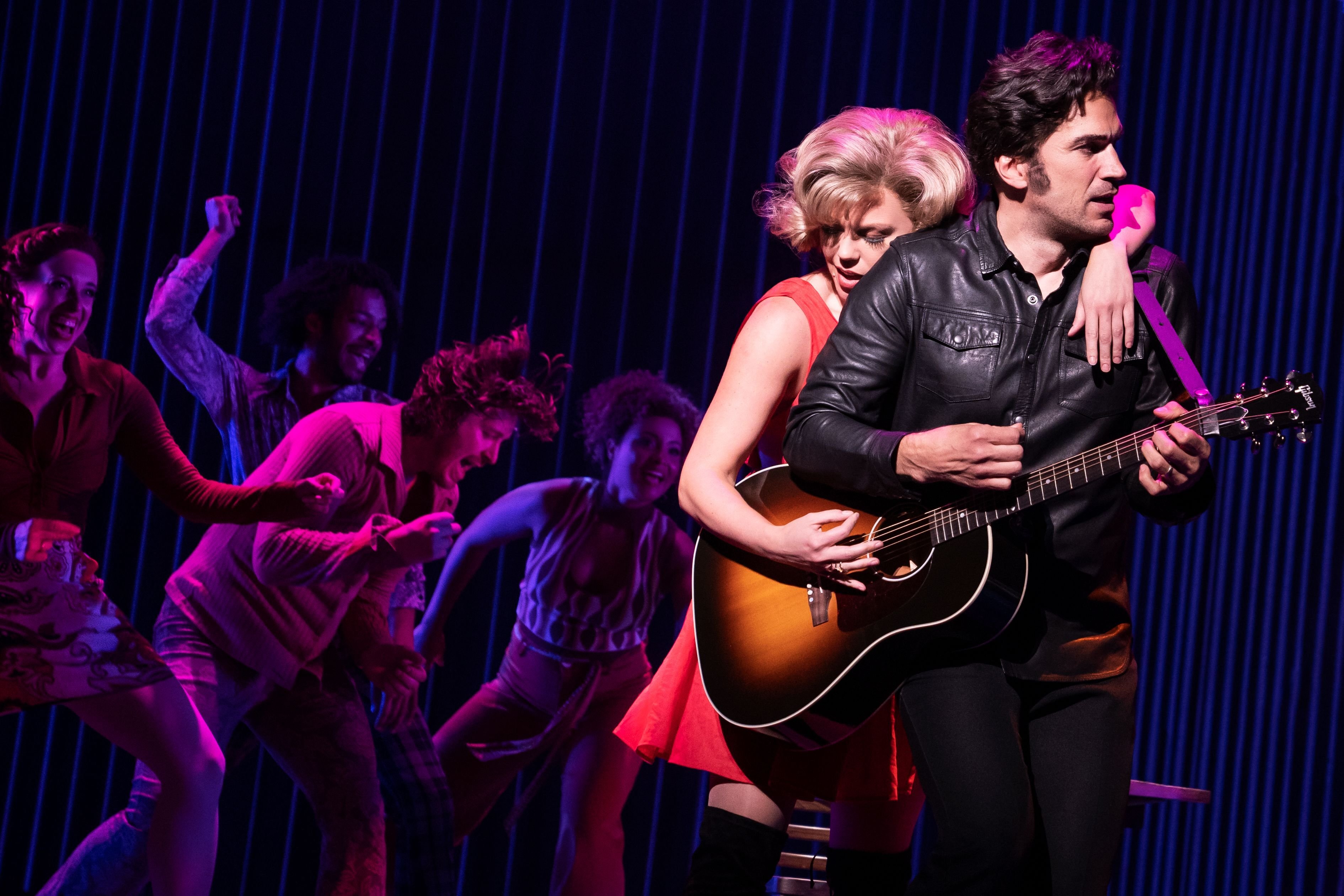 (PHOTO: Will Swenson with Robyn Hurder in the Neil Diamond musical "A Beautiful Noise," playing through August 7, 2022 at the Emerson Colonial Theatre in Boston. Photo: Matthew Murphy)

Other musical highlights include the penultimate song, the emotional, introspective piece, “I Am…I Said,” sung here as a duet by Jacoby and Swenson in one of the most poignant moments of the show.

That song is so moving that, by the time we get to the show’s closing number, “Holly Holy,” there is a sense as if the audience is in a near-religious experience. In any event, it is definitely one hell of a way to close out a thoroughly remarkable show.

Catch this musical while you can before it moves to Broadway and “A Beautiful Noise” might just have you believing in the incomparable musical legacy of Neil Diamond.

As for this reviewer? Well, “I’m a Believer,” for sure. 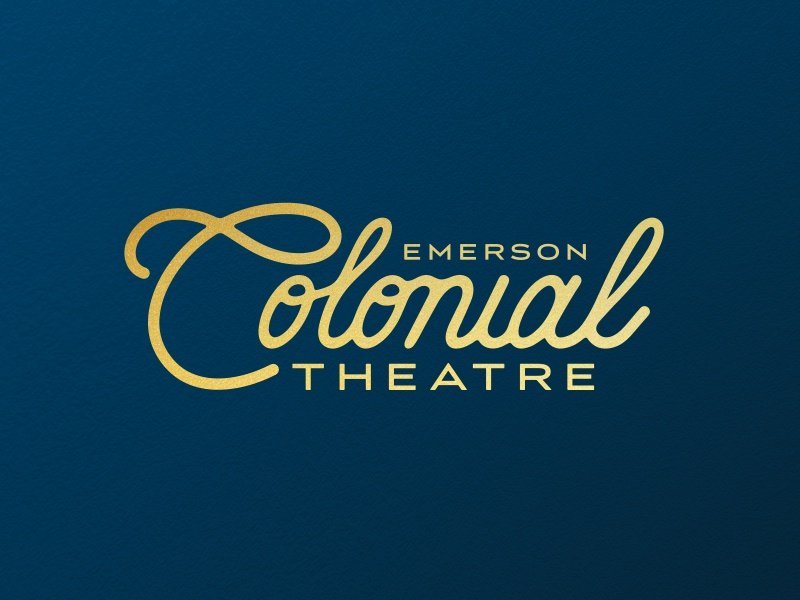