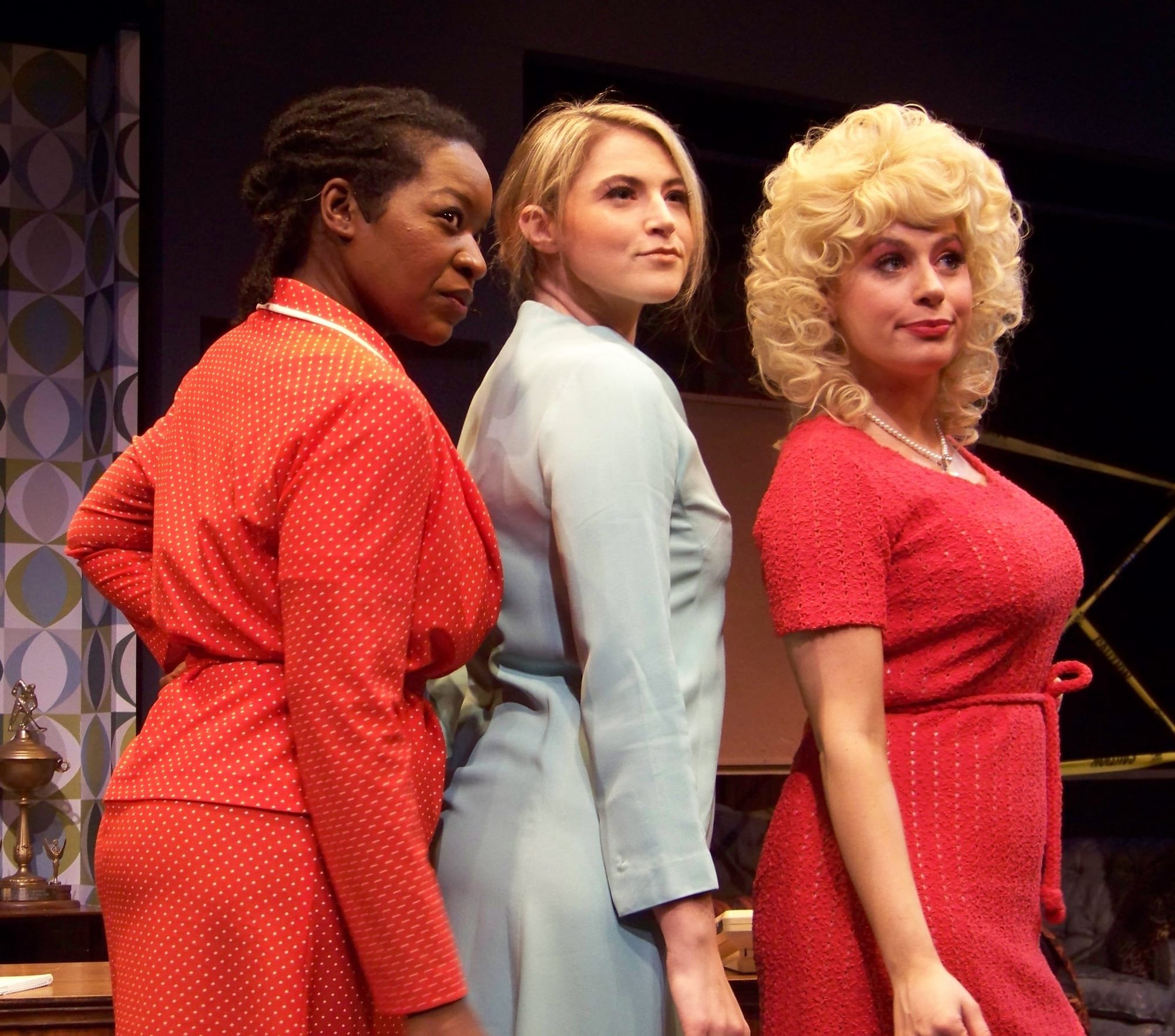 (COVER PHOTO: The Cast of Dolly Parton and Patricia Resnick's "9 to 5 - the Musical" at the Majestic Theater in West Springfield, MA. April 14 – May 29, 2022. Photo Courtesy of Lee Chambers)

By Dolly Parton and Patricia Resnick

Although originally receiving mixed reviews when it appeared on Broadway in 2009, “9 to 5 the Musical” has found renewed popularity in theatre circles in the past 13 years.

Now, the Majestic Theater in West Springfield has adapted the empowering show to their stage and it is a funny and exuberant production which faced some technical challenges opening night.

Patricia Resnick first scribed the screenplay to the motion picture “9 to 5” and the 1980 blockbuster movie would become synonymous with one of its principal players, famed singer-songwriter Dolly Parton.

When Parton was on the set in one day she composed the movie's title song which went on to become more iconic than the film itself. (PHOTO: Joe Casey and Kaytlyn Vandeloecht of Dolly Parton and Patricia Resnick's "9 to 5 - the Musical" at the Majestic Theater in West Springfield, MA. April 14 – May 29, 2022. Photo Courtesy of Lee Chambers)

Parton’s skillfully composed lyrics to the song “9 to 5” did not give away any of the plotline to the film yet was still able to capture the overall spirit of the storyline revolving around the business day-to-business day perils and pains of the 1970s working class, especially unfairly treated working class women.

When Resnick approached Parton to compose the entire score of the Broadway musical adaptation for “9 to 5” Parton’s job became much harder.

Even though she is admired as a pop culture icon, people tend to forget just how adept a songwriter and storyteller Dolly Parton is.

Yet, with “9 to 5 the Musical,” Parton rose to the task of using the words of Resnick (and her original screenplay co-scribe Colin Higgins) and translating them into a vibrant score which, thanks to Parton, remains true to the original plot of three working women oppressed by their boss, "Franklin Hart" (Joe Casey) a self-confessing “sexist, egotistical, lying, hypocritical, bigot."

Casey has a powerful voice and provides a faithful approach to the character. Hart’s one song “Here for You” has him leering over the bosomy country blonde bombshell Doralee and is hysterically over the top.

Vandeloecht is a hoot as Doralee and is given probably the purely "Partonesque number" in the musical with the song, "Backwoods Barbie."

The Majestic set, unfortunately, was so large and complex it occasionally got in its own way during scene changes as it exceeded the capacity of the Majestic stage.

There were also some sound issues at the April 15 performance with both unbalanced microphones causing some lost dialogue under the music and some startling feedback which occurred at the beginning of Act Two.

The band, under the supervision of piano/conductor Elisabeth Weber were extremely proficient handling the Parton score.

Parton herself introduces the musical via audio, serving as an expository narrator, in tandem with the obligatory opening musical number “9 to 5” to introduce the audience to the characters of the aforementioned Doralee; "Violet" (Crystin Gilmore), a widowed office manager and mother to a teenage son; and "Judy" (Mollie Posnik), a former housewife forced to enter the workplace for the first time after her husband abandons her.

Violet shows Judy the “dos” and “don’ts” in the office through the rousing ensemble number “Around Here.” This number actually succeeded the show's opener in really establishing the show's pace while highlighting the musical strength of the collective ensemble.

During the number one can almost feel staplers, hole punches and other pieces of office equipment keeping time with the music.

Gilmore gives a wonderful performance as Violet who seeks a reasonable balance in both her work and her life of a single parent. Her character, especially, showcases just a few of the many obstacles plaguing women in the workplace during the 70s and 80s (and, yes, still today).

It is this overall concept of rising above such oppressive "old boy's club" obstacles via collective perseverance and strength that resonates throughout the show with both sincerity and tact.

In Act One, through several fantasy sequences, the trio of oppressed female workers each dreams about creatively killing their cruel and lecherous boss: "The Dance of Death" is sung by Judy, "Cowgirl's Revenge" performed by Doralee and then the concluding fantasy "Potion Notion" features Violet as "Snow White," all three sequences inclusive of both Franklin and the Ensemble. The costumes used in these sequences were both stunning and hysterical.

As a five minute sequence the above would have worked fine but spread over almost twenty minutes in length it tends to prolong the concept.

By the end of Act One, fantasy becomes reality as the trio hold their boss captive at gunpoint and resolve to right all the wrongs he has done to them and their fellow female co-workers during the rousing Act One ode to female empowerment finale “Shine Like the Sun.”

Throughout the second act, we see the women proceed to make necessary changes to improve office output and environment. 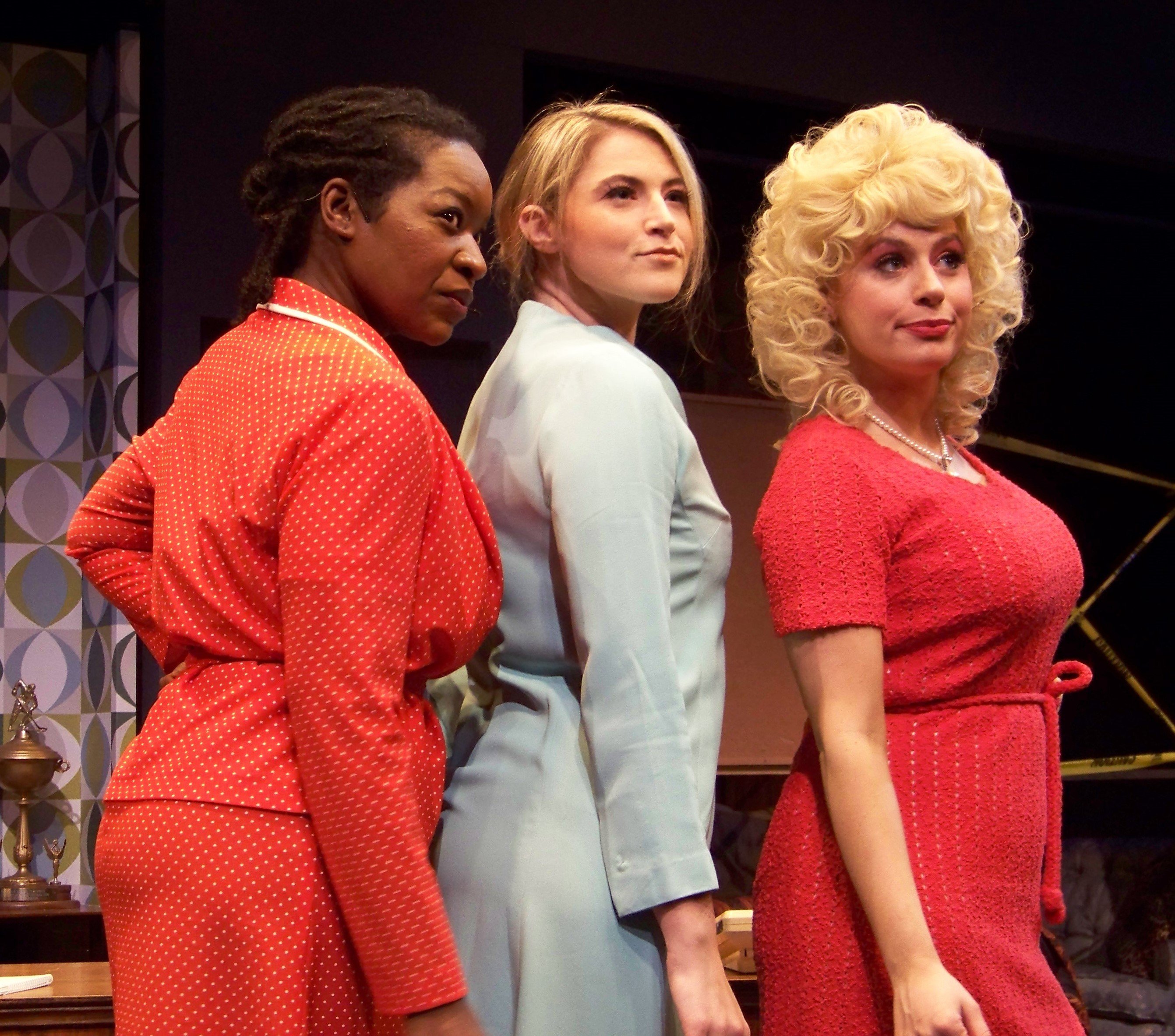 (PHOTO: Crystin Gilmore, Mollie Posnik and Kaytlyn Vandeloecht of Dolly Parton and Patricia Resnick's "9 to 5 - the Musical" at the Majestic Theater in West Springfield, MA. April 14 – May 29, 2022. Photo Courtesy of Lee Chambers)

Near the end of the show Judy’s philandering ex-husband reappears looking to reconcile but instead Judy shows him the door in the fantastic “Get Out and Stay Out,” a song which has become probably the Broadway equivalent to Gloria Gaynor’s “I Will Survive.”

If you see this production solely for this one song (which some people do), you will not be disappointed. Posnik astounds with her rendition. In its wake it was surprising she did not receive a standing ovation from the crowd as she would have been well deserving of the praise. A thoroughly impressive performance.

Another supporting performance worthy of note is that of Kait Rankins as office snoop "Roz," Hart's corporate rat who is secretly in love with Hart. She is pure comic gold singing the numbers “Heart to Hart” and “5 to 9.”

Both Parton’s score and Resnick’s book remain true to the comedy of “9 to 5”, but it is most definitely Parton’s influence that is apparent throughout the show. The Majestic musical runs through the end of May and this "9 to 5" is definitely time well spent. 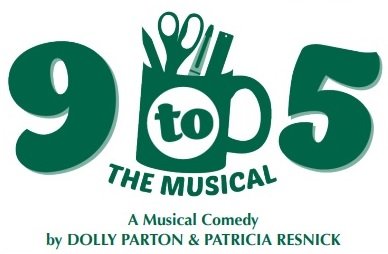 Based on the 1980 movie with music and lyrics by Dolly Parton, 9 to 5 finds three unlikely friends, Violet, Doralee, and Judy, stuck in life and stuck in unrewarding jobs.

Their boss, Franklin Hart, Jr., is president of Consolidated Industries, and is also a domineering and lecherous man.

A fantasized poisoning has him threatening to call the police on the women, but they turn the tables on him, tie him up and kidnap him.

Back at the office they institute changes under Hart’s name, improving both morale and productivity — and they also discover some “creative accounting” practices.

Hart escapes and returns to the office ready to take over again when the CEO of Consolidated, impressed by the changes, promotes Violet and ships Hart off to manage the company branch in Bolivia!

9 to 5 has been called a “goofily entertaining crowd-pleaser!”