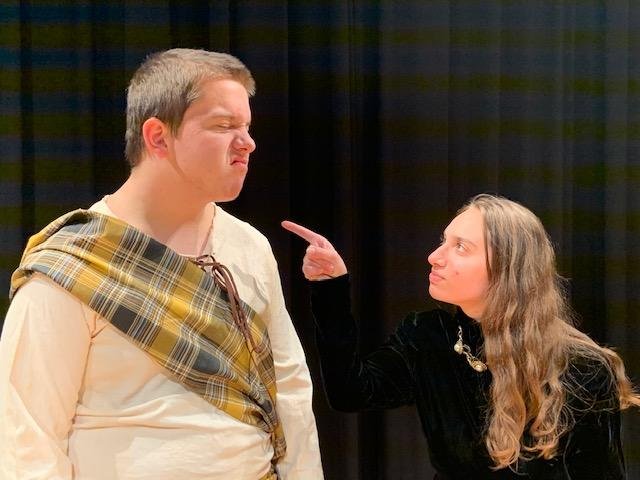 (Cover Photo: "Mmmbeth," Kyle Thompson (left) with Sophia Thomas (right). Mmmbeth is not convinced he should follow his wife’s plan)

The West Boylston Players present Drop Dead, Juliet! and Mmmbeth, two one-act parodies based on two of William Shakespeare’s most iconic works as their fall 2019 production.

In Drop Dead, Juliet! Juliet changes the course of the story by deciding she no longer wants to meet her untimely death, and instead demands the story be changed to include more romance, less death, and more roles for girls. This twisted retelling of the Shakespearean classic is sure to give you a good laugh.

Mmmbeth is a hilarious and kooky parody of the Scottish play. Daggers and donuts (yes, really) abound is this silly show. Where everything goes wrong, you will know you made the right decision when you come to see it at West Boylston Middle/High School.

The talented cast of 15 high schoolers is the first production with West Boylston’s new drama director, Debbie Huard. “The kids wanted a comedy, so we went all out,”said Huard. “I can’t wait for audiences to experience it. We hope they have as much fun watching, as we have had rehearsing.”