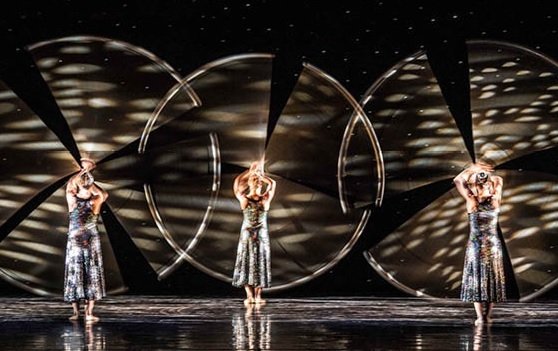 “VIVA MOMIX” at the Hanover Theatre for the Performing Arts (Worcester)

(Cover Photo and video images courtesy of the Hanover Theatre)

Presented at the Hanover Theatre for the Performing Arts, 2 Southbridge St., Worcester. Performance: Saturday, February 08 at 7:30pm. Tickets are $29, $39 and $49 depending on seat location. Discounts are available for members and groups of 10 or more. Please contact the box office at 877.571.SHOW (7469) for more information.

For "Viva Momix" Artistic Director Moses Pendleton’s perspective, the statement “Experience the exceptional. Expect the unexpected” seems to be less an tag line and more an ideology.

For 90 minutes, the goal of what Pendleton described as his latest “ode to athleticism, dance and creativity,” as executed by his nine-member ensemble, is to elevate audiences - to get them to “think creatively” and to expand beyond what limitations they may have placed upon themselves.

“We want audiences to come away with perhaps occasionally feeling a little less gravity each time they take a step,” Pendleton says.

To do so, “Viva Momix” helps transport audiences to a visually stunning realm. From the ceiling to the floor of the Hanover stage, by using imaginative feats of physicality, enhanced by original specialized lighting, sound, music and creative imagery, the show will astound all who come.

Now celebrating four decades of thrilling audiences, “Momix” has played in over 22 countries and been featured on stage, screen and television.

The production “Viva Momix” is an entertaining multimedia experience that, according to Pendleton, will “surprise, enchant and astonish.”

“Bring the kids, and have the kids bring the grandparents,” encourages Pendleton, indicating the experience is intended to be enjoyed by the entire family.

In what he describes as “an endless search for another gravity,” Pendleton, a Northern New England native from Vermont, has combined “athletic dance and pure dance” talent to create the “Viva Momix” experience.

Pendleton was featured at the 1980 Olympics where he performed a routine entitled “Momix,” which derives its name from a milk supplement fed to veal calves. The subject is not foreign to Pendleton, as he was around cows quite often while growing up in Vermont.

“My earliest experiences as a showman and choreographer came from exhibiting Holsteins and showing dairy cows at fairs (in Vermont),” Pendleton says, laughing as he recalls, “I actually choreographed one of my first routines to the milking of Holsteins.”

Pendleton’s credentials include returning to work on the Opening Ceremonies in the 2014 Sochi Olympics. According to the Momix web site, Pendleton has worked extensively in film, TV, and opera, and as a choreographer for ballet companies and special events around the world.

“Momix” was also featured in the 3-D IMAX film “IMAGINE,” one of the first films to be released in IMAX theaters world-wide.

Pendleton describes the “Viva Momix” 40th anniversary show as a series of small vignettes which make up the 2-act performance, likening it to the two sides of a record album.

“Think of it as a visual album, with a side ‘A’ and a side ‘B,’” Pendleton explains, noting the musical compositions used in the show are also of his own creation. “I would walk along and experiment, musically, cataloging those songs which I felt are important to the overall show.”

Pendleton described some of the creative challenges encountered with every show.

“It is very demanding, physically and technically,” Pendleton says. “For example there is this one segment that has the theme of the desert and which requires poles to be used. And there are three guys (dancers) who ‘locomote’ - using each of poles as props to help launch their bodies up into 'space' - and to give the appearance of suspending both time and space."

"Months and months of work goes into perfecting," Pendleton emphasized. "And the performers must do it all both musically and with enthusiasm. There is a lot of acting on top of the physicality.”

As to the type of show the Hanover audience can expect to see on February 8th – The program is about an hour and a half full of unbridled athleticism, art, dance, music, costumes, props – the whole creative gamut. A delight for all who attend and come to "experience the exceptional and expect the unexpected."

Approximately 1 hour and 30 minutes plus intermission

Recommended for grades 5 and up