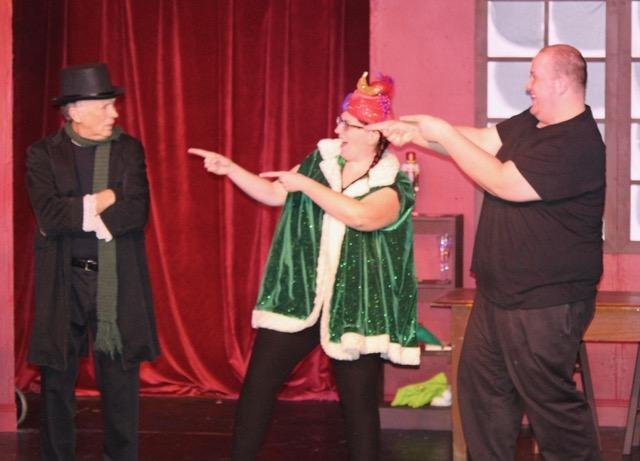 There are numerous annual yuletide musicals that have become staples of theatre companies: “A Christmas Carol,” “Nutcracker,” “Miracle on 34th Street,” and more.

But, as presented by Stageloft Repertory Theater, for one group, instead of performing the same thing for the hundredth time, three actors decide to perform every Christmas story ever told in a wild journey highlighting shows of the holiday season.

According to the show’s director, Christine Taylor, “Every Christmas Story Ever Told (And Then Some)” pays loving homage to many of the most well-known holiday classics including the animated television classics such as “The Grinch,” “Rudolph,” “Frosty the Snowman” and “A Charlie Brown’s Christmas.”

“Added to that are many obscure and fun facts about Christmas traditions from around the world, Christmas television commercials, star-studded holiday television specials, a holiday-themed dating game and more,” says Taylor.

Taylor praises the show’s writers, Michael Carleton, James FitzGerald & John K. Alvarez for having written a show, “that parodies these well known stories and characters and provides a delightfully fun holiday experience for audiences of all ages.”

Presented by just three actors, Taylor points out how the show requires “dynamic performers who are not only able to portray a large amount of very different characters, but who also have great improv skills” as the ‘fourth wall’ is broken very early in the show and the actors must interact with the audience throughout.

To cast the show, Taylor recalls how she reached out to some of the most gifted comic actors she knows.

“I was delighted when Dave Clark, Joshua Raymond and Robyn Spain accepted my offer.,” Taylor says. “All seasoned performers, these three actors share terrific chemistry and do use their real names onstage.”

Taylor describes rehearsals as being a “true collaborative process” and is pleased with how the cast has “really made this show their own.”

“All three actors are just brilliant with accents and impersonations, which they utilize to great success,” Taylor says.

Because of the tremendous number of props and costume pieces utilized in the show, Taylor admits the most challenging aspect of staging the comedy was “incorporating all of these elements into the production, while learning vast amounts of dialogue.”

Original music is provided by Will Knapp but, as Taylor points out, one piece at the end of the show (a “mash-up’ of every Christmas Carol ever sung) needed to be cut.

“The only sheet music available is what is printed in the script and is mostly illegible,” Taylor says.  “After rehearsing the production for several weeks, it felt like keeping this music at the end of the show just extended the performance too long, and detracted from, rather than enhancing the production.  We made the decision to cut it.”

Still, if an evening of laughs is being sought by those reeling during these taxing times, “Every Christmas Story Ever Told (And Then Some)” could just be the comedy prescription for a dose of holiday humor.