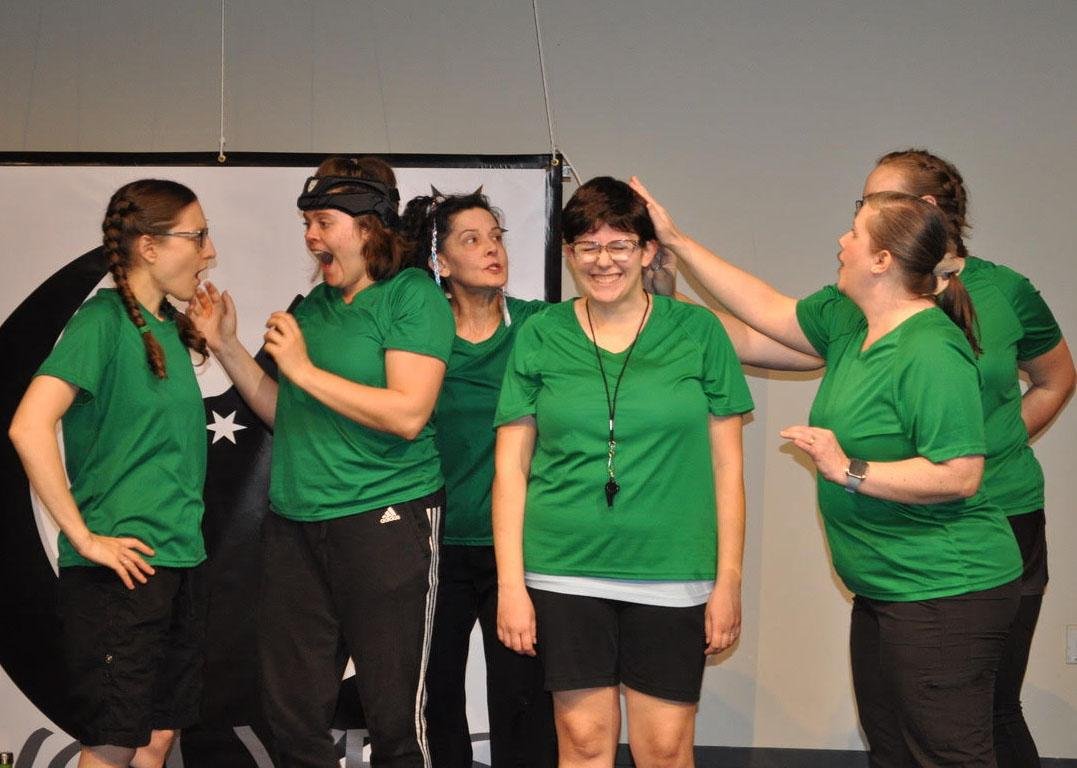 Go Go Theater presents a post-Thanksgiving story in “The Wolves,” a finalist for the 2017 Pulitzer Prize for Drama.

The play follows the highs and lows of a high school soccer team during a funny but turbulent season. Women of various ages play the "teen" players because, to quote Gertrude Stein, "We are always the same age inside."

As the show unfolds, the audience in introduced to several school-age girls during their weekly Saturday morning pre-game soccer warm-ups. Co-director Lorna Nogueira describes how the group came about choosing this particular play by Sarah DeLappe.

“We were searching for a play that spoke to the times,” says Nogueira who claims the play “amplifies the voices of people we tend to overlook, namely teenage girls.”

“It reminded me of all the issues that this generation is facing – real existential threats.”

According top Nogueira, she and fellow director Liana Vincini were also attracted to the “rhythmic way the play is written, how the words, warm-ups and drills form the framework.”

“We also like the notion of all these people about to launch into the world,” Nogueira says.

With this many characters there are overlapping sub-plots in the story. But one, according to Nogueira, stands out for her personally.

“The very first overlap stands out most to me because the dueling dialogue,” Nogueira says, pointing out how the two seemingly unrelated subjects of genocide committed by the Khmer Rouge and menstruation intersect on a singular premise.

“In the course of both of these dialogues, each touches upon an aspect of liberty,” Nogueira says. “ Forced labor versus the freedom to live a full life and choose one’s own course and the freedom of tampons versus pads. Both issues are important to these teens' lives.”

While a few may find some of the subject matters covered in the play challenging, the most challenging part of staging this show, according to Nogueira, has been “melding the overlapping dialog while performing the uniform stretches.”

“I suspected that would be tricky, so we tried to isolate the dialog and exercises first before twining them together again,” Nogueira says.

Each of the cast of actresses is assigned a number as opposed to a character name, and each brings a distinctive personality to the drama, as Nogueira explains.

Terri Boelke (#00) is a long-suffering perfectionist. “She brings authenticity (to the role)."

Tatumn Coraccio (#25) must balance the loneliness and complexity of her character. “She brings emotional understanding to the journey #25 takes in becoming a leader,” Nogueira says.

Cate D’Angelo (#2) only recently joined the cast, replacing another actor who had conflicts. “Cate has put her own original spin on #2,” Nogueira says. “She combines strength and vulnerability in the part.”

Susan Martin (#46) is one of the youngest in the cast. She brings a sense of wonder and sensitivity to her role,” Nogueira says.  “#46 is one of the toughest characters to play but Susan found the key.”

Lida McGirr doubles in the roles of #14 and Soccer Mom. “We needed a powerhouse for these two roles and Lida brings the fire.”

Vivian E. Nichols (#13) has lots of experience both in acting and improv, according to Nogueira. “She’s very playful and creative in her approach and early on discovered her character’s penchant for stirring the pot.”

Lynda Slocomb (#11) has a “tricky role” to play, says Nogueira. “Lynda goes against type to play the know-it-all of the group. She bravely plays the flaws as well as the strengths of this character.”

Carol Allard Vancil (#7) “Not many people can pull off #7,” Nogueira points out but says, “Carol immerses in and inhabits this character, makes her someone vivid and memorable.”

Finally there is Lorna Nogueira(#8). Lorna’s take on this character, per Nogueira, is that she’s “staying child-like to keep close to the mother she lost in her childhood. She doesn’t want to let go. Her Impossible Dream is to reach Disneyworld, the mecca of childhood.”

As we enter into a season filled with “Christmas Carols,” “Christmas Stories” and other such holiday fare, Go Go Theatre’s offering of a straightforward contemporary piece could offer quite a refreshing cleansing of the yuletide palate.