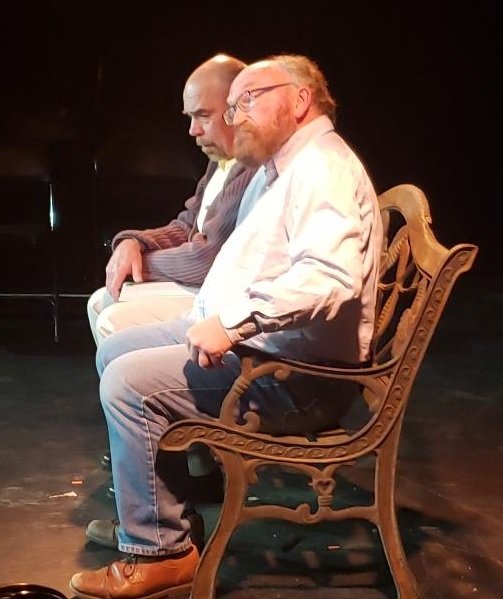 (Cover Photo of David Lee Vincent and Brian Dion in Edward Albee's "At Home at the Zoo". Photo Courtesy of Lindsay Camerlin)

"AT HOME AT THE ZOO"

PROVIDENCE, RI - "At Home at the Zoo" by Edward Albee. Presented by the Psych Drama Company. Performances to be held at the Black Box at AS220 95 Empire Street, Providence, RI 02903. Performances: Feb. 20, 21 & 22 at 7:00pm, Feb. 23 at 2:00pm. Tickets for each show are $25 and can be purchased on-line at www.thepsychdramacompany.com with discounted 2020 Season Ticket Packages also available for $66 by contacting The Psych Drama Company directly at psychdramacompany@gmail.com or 774-259-4379.

The Psych Drama Company, specializing in immersive, experimental and psychological theater, will present Edward Albee's "At Home at the Zoo" at the AS200 Black Box in Providence, Rhode Island.

The story offers a revealing look at Peter and Ann's boring marriage and their brutal, failed attempts to communicate about it. The tone changes dramatically when Peter goes out to the park and meets Jerry.

In “Homelife,” we see the characters of Peter (a book editor) and his wife, Ann, in their Upper East Side apartment.

During the show’s second act, "Zoo Story,” Peter is forever changed by an encounter with Jerry, someone he meets in Central Park.

As is the case in most of Albee’s work, this is not lighthearted fare. In fact, like his masterpiece “Who's Afraid of Virginia Woolf” it is actually quite dark and unpleasant at times.

Director Larry Segel discusses how Psych came to select the show and how he came to direct.

“I first got to know Dr. Wendy Lippe 11 years ago when she played the lead role in a production of Anton Chekhov’s ‘The Cherry Orchard’ that I directed,” Segel says. “Last year, Wendy suggested two shows for me to direct, and I chose ‘At Home at the Zoo’ because I was more familiar with it.”

Segel recalls how he saw a production of the show in the Berkshires a couple of years ago. He also played the role of “Peter” in "Zoo Story" when he was in high school.

Segel was well acquainted with the shows of The Psych Drama Company before taking on the role of director,

“I attended several Psych Drama productions, including ‘Hamlet’ and ‘Who’s Afraid of Virginia Woolf’,” Segel says. “ I was the stage manager of their presentation of ‘A Streetcar Named Desire’ in 2014.”

Over the past 25 years, according to Segel, he has directed about 10 shows for a couple of different companies in the Boston area, also functioning occasionally in the job of actor, lighting designer, and producer of dozens of shows with these groups. 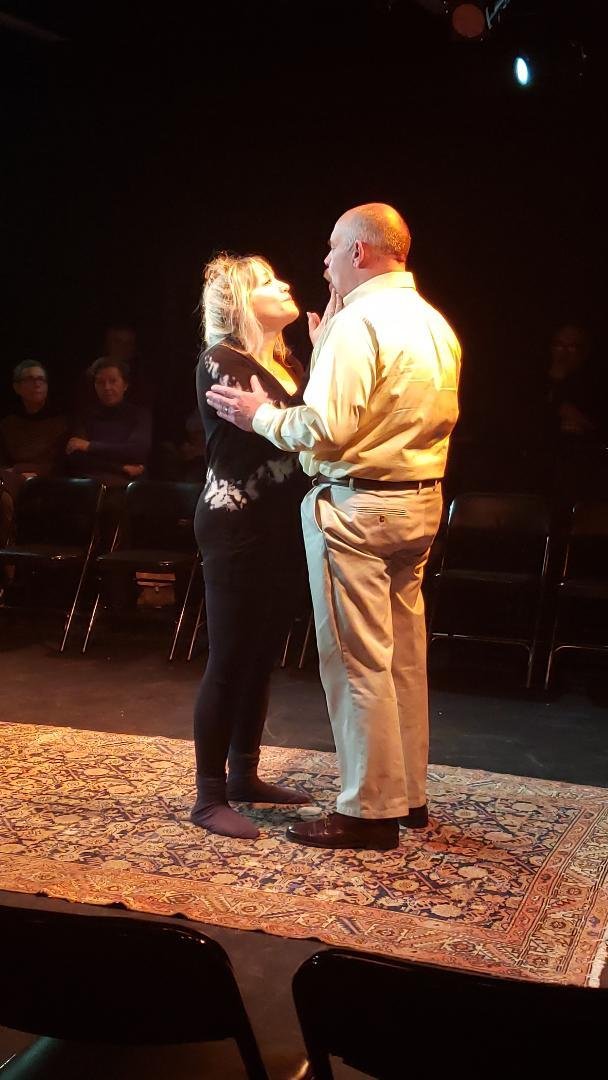 Wendy Lippe and Brian Dion in Edward Albee's "At Home at the Zoo" at the Psych Theatre Company. Photo Courtesy of Lindsay Camerlin.

The challenge of staging “At Home at the Zoo” is in making Albee’s signature style of bleak outlook and concept of dark humor amenable to audiences. Segel says he and his cast met the challenge, “By trying to find as much humor in the show as we could, which is limited.”

“Thus, the bleak moments will naturally contrast with the light moments,” Segel says, noting how Albee has written, “a very complex script, in which the mood changes from moment to moment.”

“We spent a lot of time trying to determine what is going on in each moment, and how it is colored by what happens just before and just after,” Segel states, further pointing out, “I don’t think you can approach this show by declaring that it has one over-arching mood or message.”

The cast includes David Lee Vincent, Brian Dion and Wendy Lippe and Segel praises as to what each brought to the show.

“They are each extremely talented,” Segel says. “They were all cooperative and collaborative with me in fleshing out the drama. I was constantly posing questions and making suggestions, and I let them figure out how specifically to express what we wanted.”

Segel describes how the show evolved over a long rehearsal period, and how he and his cast, “really enjoyed the process.”

“Often, I sort of knew what I wanted, but could not articulate it well. So, it took some work to come to an understanding that we all liked,” Segel says.

There were also some creative challenges faced in trying to stage the show, which Segel describes.

“We knew we wanted to have the audience on two opposite sides of the acting area, and the venue is easily configured to do this,” Segel says. “So, we had to make sure that the actors are presenting an equal amount to each side, or that they are visible in profile to both sides.”

The show, as Segel points out, also has a certain amount of violence in it.

“So, we called in an old friend, Bobby Imperato, who is a certified fight choreographer, to help us make the violence both realistic and safe,” Segel says.

However brilliant the work may be, staging a grim, intricate and thought-provoking play such as “Zoo” can be difficult.

At the end of a rehearsal, Segel’s cast might also have had the added challenge of leaving the night’s work behind and not allowing the intensity of the play, which has been described as both “gripping” and “mentally exhausting” at times, to creep into their respective lives after.

“Yes, I think the show could be shocking and disturbing for an audience, but really gripping and entertaining,” Segel contends, offering though, “For the actors, it has become much easier, because there has been so much repetition of the material in rehearsal.”

“It is wonderful to see the increase in intensity during performances in front of an audience,” Segel continues, “Building the chemistry between the actors and between them and the audience.”

All performances will include post-show discussions led by esteemed Harvard Medical School mental health professionals. They explore the themes relevant in all of the season’s productions: illusions in relationships, disappointment, self-deception, reflections on the nature of “love”, primal and civilized parts of self, and authenticity.

As part of this ‘signature practice’ of Psych Drama Company, according to Segel, the mental health professionals explore the themes relevant to the show during Q&A sessions after some of the performances. He discusses some of the feedback they have received from audiences so far.

“We have already learned a great deal from the comments, both of the psychologists, and from the audience,” Segel says, offering, “Some of this might influence the future performances in a subtle way.”

Ultimately, the director hopes audiences will come away with after seeing/experiencing “At Home at the Zoo” is, “To be impressed by the complexity of Albee’s script,” adding, “To sympathize with each of the three characters, to wonder what they might do in their situation, and to think about what in their own lives is similar. There’s a lot to work with.”

Maybe, says Segel, some in the audience might “need to see the show more than once.”

Meet the Cast of "At Home at the Zoo"

The Psych Drama Company announces the listing of regionally, nationally and internationally recognized psychologists and social workers who will be leading post-show discussions and presentations focusing on the broad ranges of psychological issues raised during each production of At Home at the Zoo at The Black Box Theater at AS220 in Providence, Rhode Island. Exploring themes relevant in Edward Albee’s play about revealing look at a troubled and boring marriage and their brutal, failed attempts to communicate about it, discussions will touch on such topics as illusions in relationships, disappointment, self-deception, reflections on the nature of “love”, primal and civilized parts of self, and authenticity.

Dr. Boucher is a social psychologist and Assistant Professor at Providence College. She earned her Ph.D. in Social/Personality Psychology from Queen's University in Kingston, Ontario, Canada, after which she worked as an Assistant Professor at the University of Texas of the Permian Basin, and then at Providence College. Her research focuses on how personality and other variables influence social interactions and close relationships, including work on the impact of uncertainty, depression symptoms, and social anxiety in friendships and romantic relationships. Post Show Talk: TBA

Dr. Newark is Past President, Supervisor and Faculty at the Psychoanalytic Couple and Family Institute of New England. Dr. Newmark is the author of numerous papers and talks dealing with psychodynamics of and psychotherapy with couples. Formerly Chief Psychologist and Director of Training at the Boston Evening Medical Center – Massachusetts General Hospital (1980-2000). Dr. Newmark also worked at Beth Israel Hospital and taught on the faculty at Harvard Medical School (1976-2010). Dr. Newmark is currently in private practice of individual, couple and family therapy in Newton, MA. Post Show Talk: “Shall we Dance? - Liaisons: Desiccated and Dangerous.”

Dr. Cooper is a Training and Supervising Analyst at the Boston Psychoanalytic Society and Institute. He is an Associate Professor of Psychology at Cambridge Health Alliance, Harvard Medical School. He served as Joint Editor-in-Chief of Psychoanalytic Dialogues from 2007-2012 and is now Chief Editor Emeritus. Dr. Cooper is the author of three books in psychoanalysis: “Objects of Hope: Exploring Possibility and Limit in Psychoanalysis,” (The Analytic Press, 2000); A Disturbance in the Field: Essays in Transference-Countertransference, ( Routledge Press, 2010) and The Melancholic Errand of Psychoanalysis: Exploring the Analyst’s Relationship to the Depressive Position (Routledge Press, 2016, now translated into Italian). He is an occasional film and arts commentator on WBUR (local NPR station in Boston), and film discussant at the Coolidge Corner Theater in Brookline, MA. Post Show Talk: “On Being a Human Animal: The Limits of Intimacy and the Intimacy of Limits”

Dr. Stone is on the faculty of the Psychodynamic Couple and Family Institute of New England; is a Supervising Psychologist and Clinical Instructor, Department of Psychiatry, Harvard Medical School at Massachusetts Mental Health Center; and in private practice, Newton, MA. Post Show Talk: “The Domestic Terrorism of Edward Albee

Tickets for each show are $25 and can be purchased on-line at www.thepsychdramacompany.com with discounted 2020 Season Ticket Packages also available for $66 by contacting The Psych Drama Company directly at psychdramacompany@gmail.com or 774-259-4379.