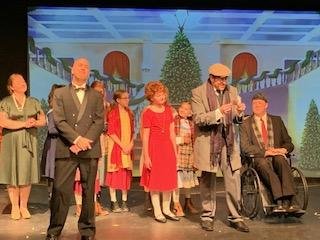 Calliope Productions presents the timeless musical “Annie,” which people tend to forget is actually set in one of the worst economic times in American history.

However, from the perspective of the show’s director, Linda Oroszko , it is because the show has an overriding theme of optimism that, even in today’s better economic yet worsening political climate, the musical may be just what people need during this season.

According to Oroszko, Calliope has historically had a large training program for children and teens.

This production of “Annie,” with its book by Thomas Meehan and score by Charles Strouse, uses seven girls, ranging in age from 9 to 12-years old.

In addition, there are several teens in the cast who have participated in Calliope workshops in the past and, says Oroszko, “have grown into high-quality performers.”

“It’s great to be able to expose all these kids to an ‘adult’ show in which I hold the same expectations of them as I do the adult cast,” Oroszko says.

Oroszko claims she was struck by the way in which the songs in “Annie” not only further the story but also set the mood, highlighting the American dynamic economic contrast in the songs ‘Hooverville’ (in which homeless exist during the Hoover administration are forced to live in tents, under highways and in the streets due to circumstances beyond their control) and “I Think I’m Gonna Like It Here”, which describes the life of leisure enjoyed by the “one percent” during the Depression.

“I know very little about the original comic strip, other than the iconic look of ‘Little Orphan Annie’ and ‘Daddy Warbucks’ which did enter into our costume choices,” Oroszko points out, indicating how it can always be a challenge to work with a large cast. In the case of “Annie,” and for the limited stage space at Calliope, the cast is maxed out at 31 including seven kids and a dog.

“Since this show is so well known among theater people and audiences, we are working to provide the cozy/familiar story audiences have come to love, while simultaneously putting our own spin on it,” Oroszko says. “The cast brings a wide range of experience and persona.  Every time I cast a show I look for that special spark- impossible to define, but you know it when you see it.”

The orphans, in particular, as Oroszko beams, “are a terrific group.”

“We had 30 girls audition for seven roles so the chances of being cast were less than one in four,” Oroszko says.  “Those who were chosen had to improvise stories to demonstrate a range of emotions.”

All of this was in addition to their standard singing and dancing auditions.

Oroszko indicates that, aside from scheduling problems (which is always in issue in community theater), each and every actor “has been a dream to direct.”

“I always encourage actors to bring their own ideas to the scene…and this cast has delivered on that,” Oroszko says. “I absolutely loved working with the orphans. They bring such energy and enthusiasm.”

While there will be a large number of family members in the audience, there is also a large contingent of Calliope faithful who enjoy their big musical in December.  But Oroszko says she has prepared her cast for each audience to react differently.

“I direct them to keep their performances as rehearsed and not to adjust as to the way they hear audiences responding,” Oroszko says. “We’ve got the show we want. Let’s have fun presenting it.”

Oroszko believes all audiences attending Calliope’s “Annie” will come away with a smile on their faces and a song in their heart.