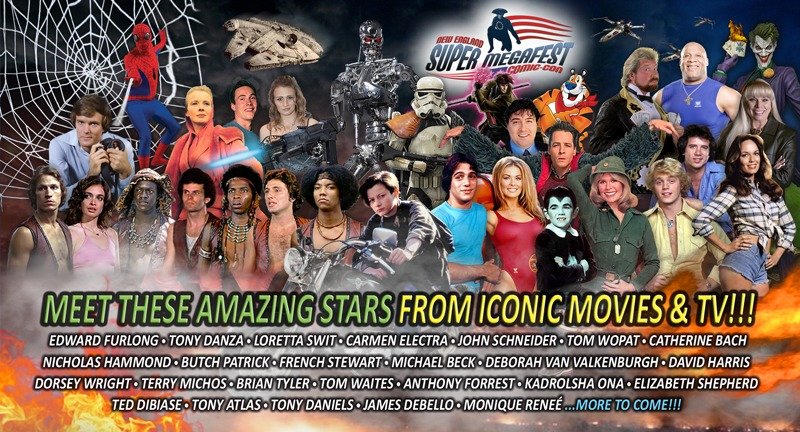 Framingham’s “Super Megafest” unites not only stars of the screen but of the stage.

Admittedly, Comic Cons are a marketplace for cultural icons. A veritable bastion of books, artwork, photos, videos and more. A way for fans to observe and/or embrace just a “piece” of cinematic, animated, television, internet glory days.

The main draw to these events are the celebrities brought in to help pull in the crowds. And certainly no organization does it better in Central Massachusetts than the folks running the Super Megafest Comic Con in Framingham.

This weekend they have dozens of cultural icons from the “Dukes of Hazzard” cast to Tony Danza of “Taxi” fame to Loretta Swit of “M*A*S*H*” to the entire cast of "The Warriors" reuniting for a 40th Anniversary panel.

Yet, while they may be most noted for moments on screen, many of the celebrities of the cinematic and television screens both big and small (or these days all size and thumbnail)  also paid their dues on the stage, as well.

We were able to catch up with a few of these celebrities who spoke with METRMAG about their days on the boards before their celluloid ascent.

Beginning with actor Tony Danza, who recalled what he felt were two of the most important words when it comes to becoming an all around entertainer and actor.

Danza recalled fondly his experience performing in the 2015 musical adaptation of “Honeymoon in Vegas.”

“I had a great time,” Danza said. “So much fun – great cast, great production, great score. I had a fantastic time doing the show.”

The musical, with book by Andrew Bergman and a score by Jason Robert Brown, was based on the 1992 movie which Bergman also wrote and directed. The show was nominated for five Drama Desk Awards, with Danza taking on the role of Tommy Korman, played by James Caan in the ‘92 film.

Actress Loretta Swit (of “M*A*S*H*” fame) has appeared in numerous stage roles including the 2012 “rotating-cast” staging of the play “love, Loss and What I Wore”  by Nora and Delia Ephron. In 1985 she appeared in the musical “The Mystery of Edwin Drood” and, back in 1975 at the height of popularity during her “M*A*S*H*” days, she also appeared in the Bernard Slade comedy “Same Time Next Year” (in 1978 her “M*A*S*H* co-star Alan Alda would star in the movie adaptation).

Swit also starred with Leslie Ann Warren in the televised adaptation of 'Superman the Musical".

For the cast of the 1970s television show “Dukes of Hazzard,” who have reunited for this weekend event, each one has some history in musical theatre.

Actors John Schneider and Tom Wopat (Luke and Bo Duke…or is it Bo and Luke Duke) have each performed the character of “Billy” in the musical “Chicago” – ten years apart (Schneider in 1996 and Wopat in 2006).

Schneider also starred on Broadway in the musical “Grand Hotel” in 1989 with a book by Luther Davis and score by Robert Wright and George Forrest (with additional music and lyrics by Maury Yeston).

Wopat has also had a long, distinguished career with many stage musical credits including “42nd Street,” “Catch Me If You Can” and the revival of “Annie Get Your Gun” with Bernadette Peters.

Before posters of her image adorned the walls of young boy’s bedrooms and dorms, actress Catherine Bach (aka “Daisy Duke”) got her professional start in a staged production of “Sound of Music” which connects her to another attendee, Nicholas Hammond.

Years after becoming the first actor to play “Spider-Man” in the 1977 television series, Hammond, who has been steadily working in Los Angeles but also Australia where he resides, recently had a career renaissance thanks to Quentin Tarantino’s latest movie, “Once Upon a Time in Hollywood” with Leonardo DiCaprio.

“I was speaking with Leonardo about the business, because we have a shared experience as we both started as child actors,” Hammond said, referring to his own beginnings as one of the Von Trapp Family children in the iconic movie adaptation of “The Sound of Music” by Richard Rodgers and Oscar Hammerstein II.

“It was one of the great experiences of my life,” Hammond said. “I got that job, funnily enough, because I was doing a show here at the Colonial Theatre in Boston.”

As a result of his performance, Hammond said his family was contacted by an agent to audition for the role of Friedrich, the oldest boy in the film adaptation of the Von Trapp Family story.

While pleased to be working in the area of film he advised “theatre is still my first love.”

One table over from Hammond sat veteran actress Elizabeth Shepherd, who has taught at the Stella Adler Studio of Acting.

Hammond smiled as he recalled how he was in college as the two appeared together in the play “Conduct Unbecoming” by Barry England.

“I was just in awe of her (Elizabeth),” Hammond said. “She was a great star who had come over from England to do this play.”

Shepherd has appeared in numerous Shakespearean and teaches it at the Stella Adler school, and she emphasized education as being critical for an actor’s development.

“The thing was, when I started, I never did go to drama school,” Shepherd said. “because there was a repertory system.”

She advised this system would cast her in roles, regardless if she was “right” for some of them.

She did note the experience itself was good “on the job” training but emphasized how vastly the business of acting professionally has changed since working under contract with the permanent companies.

“There aren’t those permanent companies, almost none left,” Shepherd said. “So, it is now important to train, and to train your voice because your voice is your instrument.”

Shephard’s career has included credits as both Lady Rowena and Ligeia in Roger Corman's “The Tomb of Ligeia” (1965) and “Damien: Omen II” as the ill-fated reporter Joan Hart.

With a distinguished resume in both theatre and film, Shepherd acknowledged a basic distinction between working as an actor in the two forms.

“As an actor in theatre, you are entrusted in the role from beginning to end,” Shepherd said. “In film, of course, it is broken up,” indicating because a film may be shot out of sequence (i.e. different days, non-sequential scenes, etc.) it may make it difficult to approach and/or execute the material in a ‘linear’ fashion as one does on stage.

Echoing the mission statement of the Adler Studio, Shepherd advised actors just venturing into the art form as a profession, to use all the “tools, training, and discipline” at their disposal  to best “grow as an actor.”

French Stewart recalled his time on stage recently as Elwood P. Dowd in the classic comedy “Harvey” by Mary Chase at the Laguna Playhouse, a production in which his wife, Vanessa Claire Stewart, also starred.

“It was on my bucket list,” French said. “I mean Elwood P. Dowd is a role I wanted to do for a very long time. And we had very little time to put it together. Three weeks. But we did a beautiful, beautiful production of ‘Harvey’. It was a joyous experience.”

Actor Michael Beck is probably best known for his role in the move “The Warriors” and this weekend at Super MegaFest the entire cast of the movie has reunited to trade some of their war stories in the business with their fans.

But Beck, who trained in theatre in the UK, also is a recognizable figure for any fans of the movie “Xanadu” with Olivia Newton-John, from which spawned one of the funniest musical parodies ever to be put on stage (or on skates – sorry “Starlight Express”).

Oddly enough, without “The Warriors” Beck might never have gotten the role opposite ONJ.

“How that came about it is the producer of ‘Warriors’ also produced ‘Xanadu’ so that is how it all worked out,” Beck said.

One of his “Warriors” co-stars, Deborah Van Valkenberg, would also become identified with the old television comedy series, “Too Close For Comfort” but she, as well, has roots in theatre appearing in a 1977 staging of the musical “Hair.”

So, for every photo on display on each celebrity table you pass by, please keep in mind there may be a lot of experience, a lot of dues paid and a lot of history on that table. And that, friends, is truly priceless.