Based on the Poem by Joseph Moncure March

Directed and Choreographed by Eddie Zitka

THE WILD PARTY is presented through special arrangement with Music Theatre International (MTI). All authorized performance materials are also supplied by MTI. www.mtishows.com

MASKS AND PROOF OF VACCINATION REQUIRED AT NORTHAMPTON CENTER FOR THE ARTS AND ALL KETG PRODUCTIONS UNTIL FURTHER NOTICE. 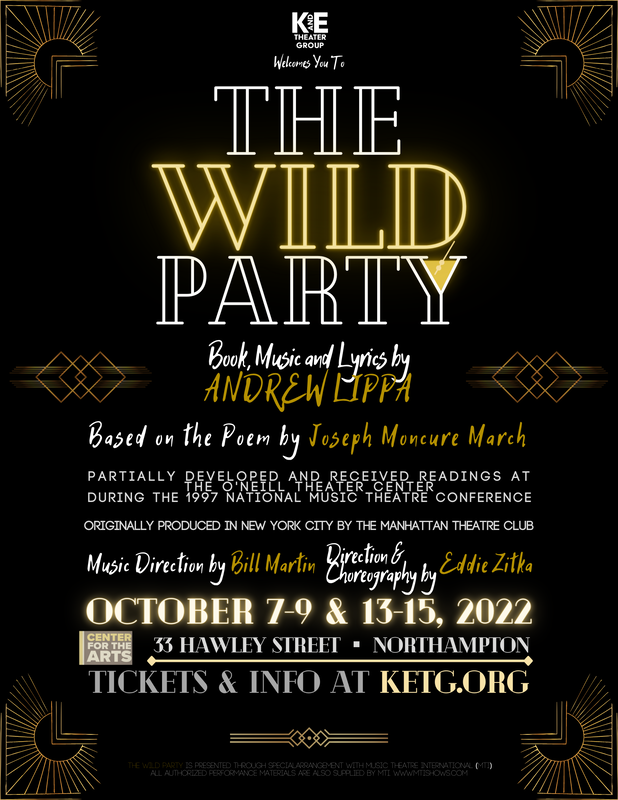 A steamy prohibition tale, steamrolling and roaring its way across the stage, ANDREW LIPPA'S WILD PARTY was an Off-Broadway gem that garnered an array of industry accolades, including Drama Desk, Outer Critics Circle and Obie awards in 2000.

Based on Joseph Moncure March's evocative 1928 narrative poem of the same name, this darkly brilliant show features one of the most exciting, pulse-racing scores ever written.

Lovers Queenie and Burrs decide to throw the party-to-end-all-parties in their Manhattan apartment.

After the colorful arrival of a slew of guests living life on the edge, Queenie's wandering eyes land on a striking man named Black.

As the decadence is reaching a climax, so is Burrs' jealousy, which erupts and sends him into a violent rage.

Gun in hand and inhibitions abandoned, Burrs turns on Queenie and Black. The gun gets fired, but who's been shot?

ABOUT K AND E THEATER GROUP

K and E Theater Group seeks to further the education of and provide dramatic art entertainment to the surrounding Western Massachusetts communities, actively recruiting the new performers, and enriching the performers’ experiences as they interact with theatrical arts.

Northampton Center for the Arts