"Run for your Wife" by Ray Cooney - NPTG - POSTPONED! 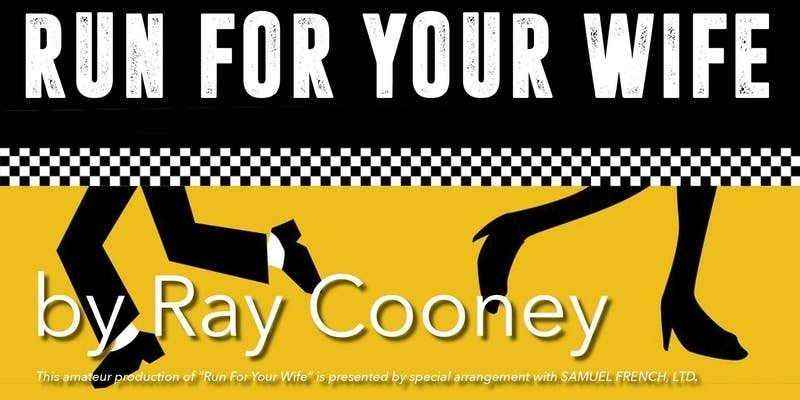 "RUN FOR YOUR WIFE"

Free parking is available in the RBT lot across the street.

A London cab driver, John Smith, literally has two lives, complete with two different wives, Mary and Barbara, in different areas of London.  Somehow, he manages to juggle them both without arousing suspicion. However, he gets caught up in a mugging, and wakes up in a hospital, where he ends up with the wrong wife by his side and is forced to deal with explaining things to both of his wives and the police, as he tries to keep his double life from exploding.

RUN FOR YOUR WIFE, by Ray Cooney
Directed by Ed Knights
POSTPONED!

Join the NPTG Festival Singers as we sing on "Barbara & You" at FATV on Tuesday February 11th!  Our first rehearsal was well attended.  Additional rehearsals will be held on Mondays and Thursdays @ 7 PM.  You can still join!  Again, you don't need to memorize the music, or learn any dance moves....just come, sing, and have fun.  We had a wonderful time over the Christmas season, and look forward to more opportunities throughout 2020!

We are very pleased to announce that we have been awarded a grant by the Trustees of the George R. Wallace foundation in the amount of $5,000 for the major upgrade of our elevator.   Although that is GREAT news, it has been awarded as a "matching grant" knowing that we will need raise $5,000 to reach the amount needed to repair the elevator and be awarded the grant.  Our elevator company tried for some time to find parts to "retro-fit" our elevator, however, they were unsuccessful and an entirely new logic and control system has been quoted to us at $10,000.   The elevator is not simply a convenience. We have had to turn away some elderly and handicapped people from seeing their friends of family members in our shows, which is very distressing and unfortunate - for them and NPTG.  With the cost of productions rising all the time and the size of our theater, this is not the kind of money we can easily raise without your help.

Could you consider a donation?

NPTG is federally recognized 501(C)3 organization and your contributions are totally tax deductible. Many people look for a deserving place to make a donation, as we near the end of the tax year; so we hope you might consider us.

Although no plans are finalized at this time, I would hope that we could plan to mount a plaque near the working elevator in the near future, listing the Wallace Foundation and at least all the major contributors.