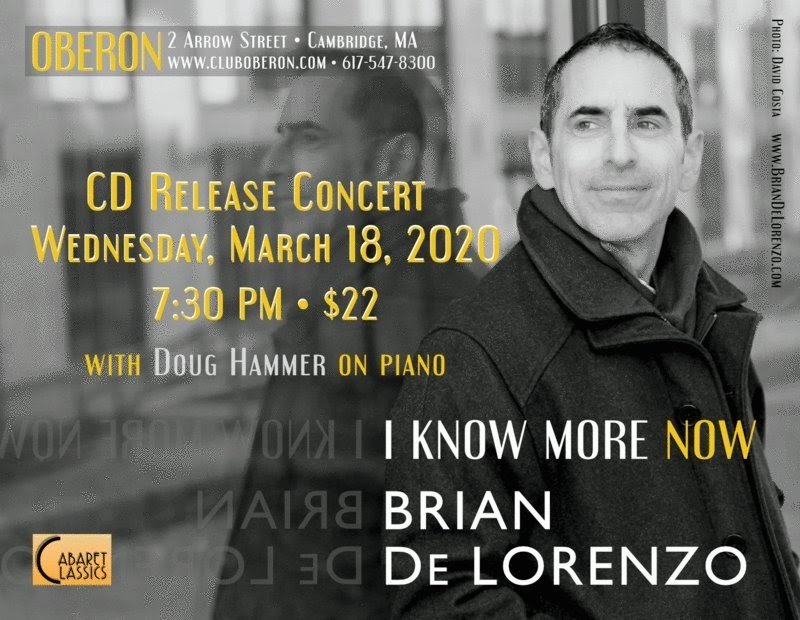 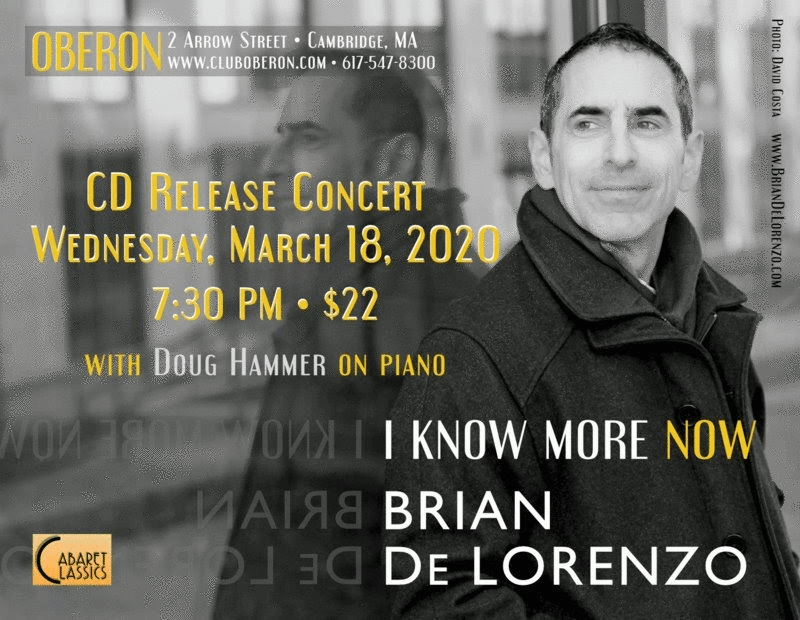 Following the official release of his “I KNOW MORE NOW” CD on February 21, award-winning actor and cabaret singer BRIAN De LORENZO will dazzle Greater Boston audiences with music from his new album and some past favorites, at a concert on Wednesday, March 18 at Harvard Square’s OBERON, 2 Arrow Street, Cambridge.

Accompanied by Doug Hammer on piano, Brian will perform songs from the new CD as well as songs from his first CD, “Found Treasures,” with selections by Marvin Hamlisch, Diane Warren, Johnny Mercer, Rodgers & Hammerstein, Pasek & Paul, Shaiman & Wittman, William Finn, and others.

"Nearly 20 years after my first recording, I realized I had songs in the corners of my mind begging me to record them,” says De Lorenzo. “So in early 2019, I said to myself, 'I'm going to take these songs to my friend and collaborator Doug Hammer, and we’ll record them in his studio and see what comes of it.”

"A genuinely exciting aspect of this CD is in the history of the material. I’m the first singer to record the beautiful “Every Morning (Mary)” which I first heard appearing in the New England premiere of Moby Dick: An American Opera, in 2001. My character didn’t get to sing it, but I fell in love with it and have performed it many times since. I’m extremely grateful for the inspiring songs of David Friedman; this recording includes three of his works."

According to De Lorenzo, the CD title comes from a line in 'No More', from Marvin Hamlisch and David Zippel's 'The Goodbye Girl.' “It’s appropriate, because, after 20 more years of simply being alive, I do know more now...”

He has sung at the prestigious Mabel Mercer Cabaret Conventions in New York and Chicago, at three Boston Cabaret Festivals, the International Cabaret Festival in New York, The Cape Cod Cabaret Festival, and numerous times at CabaretFest! in Provincetown. He has performed tributes to Frank Sinatra and Tony Bennett (“Sinatra, Tony, & Me”) and to Nat King Cole at New York’s Metropolitan Room and Boston’s top jazz club, Scullers. Brian’s show “Come Fly with Me – Brian De Lorenzo Celebrates Sinatra at 100 was named “Top Ten of New York Cabaret 2015.” His debut recording “Found Treasures” was nominated for the “Recording of the Year Award” by the Manhattan Association of Cabarets & Clubs (MAC). He is also featured extensively on the original cast recording Made in America: Vaudeville Songs, a tribute to the Gumm (Judy Garland) family in which he starred at Don’t Tell Mama in New York. http://www.BrianDeLorenzo.com @briansings

Doug is a veteran musician, composer, producer, arranger, and engineer. He draws inspiration from everything and channels it into his music. Doug’s style is diverse, from contemplative and spacious to animated and dynamic. He has released 13 solo CDs and a film score. His release Travels won 2011 Album of the Year on Whisperings Solo Piano Radio. It was also nominated for “Album of the Year” by Reviews New Age and SoloPIano.com. He is a scholarship graduate of Berklee College of Music. Doug’s music can be heard on Pandora, Spotify, Music Choice, and Whisperings Solo Piano Radio. http://www.doughammer.net