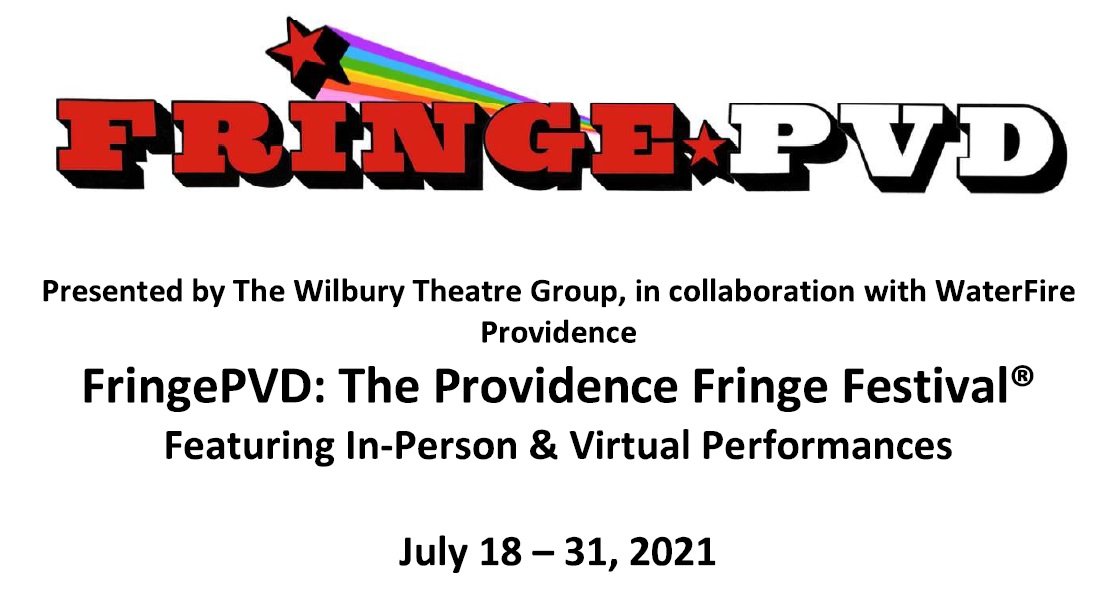 The Wilbury Theatre Group, in collaboration with WaterFire Providence

Founded in 2014 by The Wilbury Theatre Group and presented since 2017 by The Wilbury Group in collaboration with WaterFire Providence, FringePVD brings together more than three hundred individual theatre, music, dance, multimedia and performing artists for two weeks of performances in and around WaterFire Arts Center, as well as online.

Single tickets and Fringe Passes, which grant entry to any in-person/online show, are available here: FringePVD.org/artists-2021

Stages include multiple sites on WaterFire Art Center’s Campus, as well as performance spaces at the Steelyard, The Nicholson File, the new Farm Fresh building on Valley Street, and businesses along The Greenway.

In addition to stages for the in-person performances, FringePVD will also feature a streaming studio, on-site, for audience members to view the online performances from WaterFire Arts Center.

FringePVD kicks-off this year on Monday, July 19 with an Opening Night Party from 7:00 – 9:00pm, sponsored by TROOP and featuring performances by the Rhode Island Ukulele Armada and The Providence Drum Troupe.

FringePVD will continue its community focus with free events throughout the festival including a Family Fringe Day (July 26), live performances of Capture the Block (July 30 & 31) and a Humanities discussion; “What is fringe?” (July 26).

Capture the Block is a community-centered storytelling piece developed by journalist Ana Gonzalez with support from the Rhode Island Council for the Humanities’ Culture is Key initiative, showcasing stories from Providence locals about the ways COVID has impacted their lives.

Capture the Block, which had a virtual performance last February, will be collecting new stories from community members during FringePVD to showcase at the end of the festival.

The Humanities discussion, “What is fringe?” is moderated by Dr. Micah Salkind (City of Providence Department of Art, Culture + Tourism), public programming experts Christina Bevilacqua and Janaya Kizzie (Providence Public Library), performance studies scholar Avishek Ganguly (RISD) and multi-media performer and curator Shey Rivera Ríos. Together they will discuss what “fringe” means today, as artists have had to adapt the ways they create and share work with audiences.

“FringePVD has always been an important place for the artistic community to come together, but this year it’s especially paramount after being apart for so long,” said Wilbury’s Artistic Director Josh Short. “Now that we’ve announced WaterFire Arts Center as our new home, we look forward to this expanded Fringe Festival and the future ahead.”

FringePVD: The Providence Fringe Festival® is produced by The Wilbury Theatre Group and presented in collaboration with WaterFire Providence. Their year-round staff and creative teams serve in official capacities for the Festival alongside part time Fringe-only staff, volunteers, and collaborators.

Founded in 2010, The Wilbury Theatre Group's goal has been to offer audiences from throughout New England affordable access to cutting-edge theatre.

Through the development of our Main Series season, outreach and education programs, new work development programs (a.k.a. Studio W), and the Providence Fringe Festival®, they are proud to bring these professional theatre productions to a diverse and ever-evolving community.

About The Wilbury Theatre Group

Winner of the 2018 National Theater Company Award from the American Theatre Wing, The Wilbury Theatre Group is a professional, nonprofit theatre company that engages our community in thought-provoking conversation through new works, reimagined classics and adventurous playmaking. We are idealistic, ambitious, and stubborn in our resolve to create theatre that entertains, enlightens, and inspires. For more information visit thewilburygroup.org

"Over the River and Through the Woods" by Joe DiPietro - Square One Players (Shrewsbury)
"Julius Caesar" by William Shakespeare - Hanover Theatre Repertory (Worcester, MA.)
"Rock of Ages" kicks off new season at The Company Theatre (Norwell, MA.)