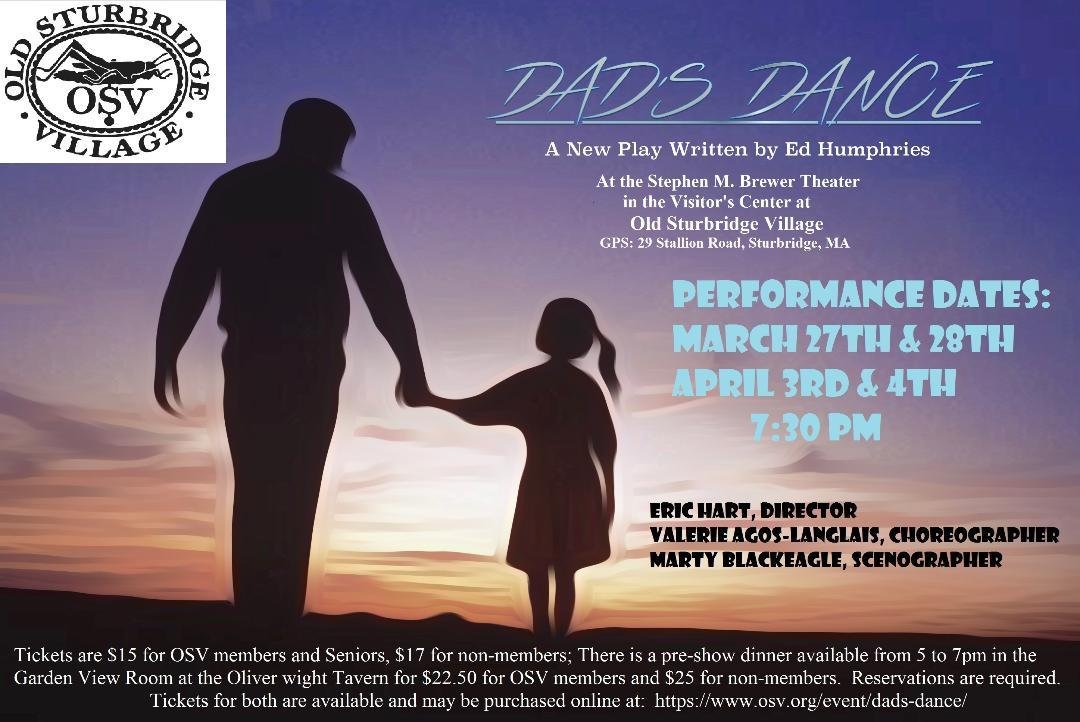 Dad’s Dance’ is officially postponed. We’ll have more details to share soon - including a pretty promising plan to stage this - THIS YEAR - once life resumes its regularly scheduled programming. Plans are in motion and we’ll have more to share soon. For now, stay safe. You’ll get your chance to dance with us soon enough.

(NOTE - Details to come soon in terms of how to get refunds along with the rescheduled info).

1 Old Sturbridge Village Rd, Sturbridge, MA 01566.Tickets are $15.00 for OSV members and seniors, $17.00 for non-members. There is a pre-show dinner available from 5:00pm to 7:00pm in the Garden View Room at the Oliver Wight Tavern for $22.50 for OSV members and $25 for non-members. Reservations are required. Tickets for both are available and may be purchased online at: https://www.osv.org/event/dads-dance/

“Dad’s Dance” is a contemporary comedy-drama about the indelible bonds that sometimes form between strangers on this grand and surprising stage of life - one where comedy and poignancy carry equal weight - and where Brendan begins to understand that true wealth is measured not in the treasures we keep but the memories we make.

Brendan Carter is a doting Dad who has watched his daughter Emma nurture her passion for dance from a very young age to the very edge of adulthood.

In her Senior Year, he decides to take a major leap and join the choreographed Dad’s Dance; an annual event that is always the highlight of the big end-of-year recital.

It is there that Brendan falls into the good graces - or clutches - of a ragtag group of fellow parents who put all sense of dignity aside to put on a show for the audience and a smile on their children’s’ faces - no matter the toll to their two left feet and equally fragile pride.

And in the lead-up to the big event, Brendan begins to learn a lot about the healing power of community.

BRENDAN CARTER (played by Ed Humphries) - A doting Dad whose High School daughter, Emma, has been dancing since she could walk. This is his first year “volunteering” for the fabled Dads’ Dance.

HOLDEN CAISSE (played by Michael Swanson) - A young father - his daughter is completing her second year of dance.

JAKE TENNETT (played by Stephen Jean) - Father to two girls and one boy. He’s the fearless leader of the annual Dads Dance. This is his 10th year and he’s expecting a trophy, damn it.

CLAIRE HARCOURT (played by Lynn Boucher) - A Grandmother - she retired from her nursing career early so that she could help her daughter, a single Mom. If that means dancing in the annual recital, so be it.

HARLEY SLATER (played by Stephanie Sawyer) - She and her partner have raised three children - one a piece from prior marriages and a third whom they adopted together. Theirs is a loving union and she puts up with her fellow rhythmically-challenged “Dads” year-after-year because it’s worth it to see the smiles on the children’s faces.

MICHAEL DONATELLO (played by Mickey Dearn) - A quiet, shy guy who met the woman of his dreams when & where he least expected it. She’s done wonders to break him from his shell - and now he’s about to dance in his fourth recital. He’s the wild card of the operation.

MISS ALICIA (played by Prreeti Tiwari) - Cara’s second-in-command and the choreographer of the annual Dads’ Dance.

The production will be the first in a continuing series of plays being put on by Old Sturbridge Village in the Stephan M. Brewer Theater as an inaugural to a new theater series at the OSV iconic attraction.