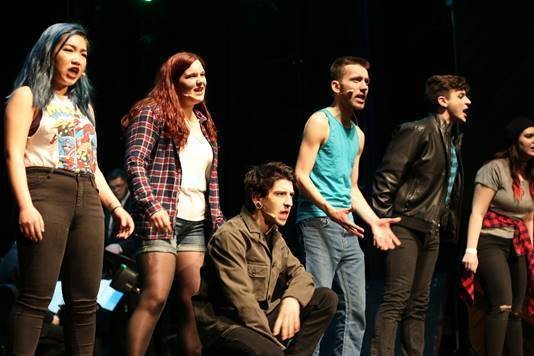 Performance: April 15th at 8:00pm at the Berklee Performance Center, Berklee College of Music, 136 Massachusetts Ave, Boston, MA 02115. Tickets are $10 in advance at Berklee.edu/events or $15 at the door.

Berklee students will be performing in the 11th annual Curtain Up! musical theater showcase on April 15th at the Berklee Performance Center.

The unique show is entirely student run and arranged and features a 17-piece band and more than a dozen singers.

It is a great way to catch some of Broadway’s biggest stars in the making.

Berklee to Showcase Student Musical Theater Writers with Curtain Up!

Students Perform during Curtain Up! 2017

Tickets are on sale now at Berklee.edu/events.

Now in its 11th year, Curtain Up! has served as a launching pad for some of the school’s biggest names in musical theater.

Broadway Associate Conductor of Hamilton, Mike Moise, singer Vincint Cannady of TV’s The Four, actor Claudia Yanez who has played the role of Gloria Estafan in the tour of On Your Feet, the Come From Away tour’s music director Cameron Moncur and actor Aaron Michael Ray all previously lit up the stage of Curtain Up!

Numerous student pit musicians have gone on to play for Broadway, off-Broadway and national tours including Josh Plotner on reeds for Broadway’s Be More Chill and Elena Bonomo on drums in Broadway’s current Six.

Curtain Up! songwriting alumnus Khiyon Hursey has written for Netflix’s musical series Soundtrack and was commissioned to write a song performed by Eden Espinosa in celebration of Wicked’s 20th anniversary.

Finally, Off-Broadway’s Prospect Theater Company produced a sold-out concert of alumnus Paulo K. Tiról’s On This Side of The World.

“Curtain Up! is a reflection of the next generation of new musical theater artists, students who will soon make their mark,” said Michael Wartofsky, faculty advisor to Curtain Up! “The opportunity for young writers to hear their brand-new theater songs fully orchestrated is unique. The cross-collaboration among songwriters, orchestrators, conductors, musicians and actors gives them real-world theater experience before they graduate.”

Curtain Up! will start at 8pm on April 15th at the Berklee Performance Center. Tickets are $10 in advance at Berklee.edu/events or $15 at the door.