"The Play That Goes Wrong" at the Hanover Theatre - REVIEW 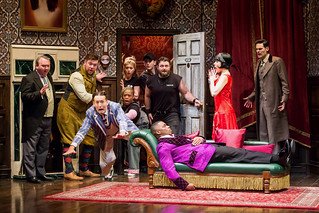 (Cover Photo: National Touring Cast of The Play That Goes Wrong. Images courtesy of broadwaygoeswrong.com and Hanover Theatre. Actors pictured are NOT the Hanover cast)

The Drama Society at Cornley University presented the dark and brooding drama, “The Murder at Haversham Manor” and performed the material to meticulous perfection. Their professionalism and dedication to present the best show possible was only exceeded by their collective talent.

The only thing missing was any element of comedy.

Of course, this is utter balderdash as the Mischief Theatre Company presents “The Play That Goes Wrong” at the Hanover Theatre this weekend and absolutely must be seen.

If you are not involved in theatre, the show is funny beyond belief. If you have been involved in theatre for upwards of forty years or more, there are far too many “familiar” moments that will hit so close to home…then the cast will spit turpentine on them and proceed to set those memories on fire.

While the two act play begins as farce similar to the comedies “Play On” and “Noises Off” – it is the mechanics of the show which help to bring the house down…literally…Haversham Manor, that is.

Opening on Broadway in 2017, the comedy had already previously won for Best New Comedy at the 2015 Laurence Olivier Awards.

As written by Henry Lewis, Jonathan Sayer, and Henry Shields of Mischief Theatre Company, the tour is directed by Matt DiCarlo based on the original Broadway direction by Mark Bell.

Even before the play begins, look for crew members in the house who are trying to fix the massive set. Be prepared as you might be asked to help.

The played being presented is “The Murder at Haversham Manor” which is a “serious” 1920s murder mystery play and, during the performance, the cast and crew contends with non-functional set pieces, ill-prepared cast members, an incompetent crew and floors collapsing.

There is a piece of advice directors often love to give casts: “No matter what happens…no matter what goes wrong…just keep going. KEEP GOING!” It is emphasized repeatedly.

This particular bit of advice should probably not have been given to the cast of this Cornely Drama Society show because they follow it religiously, with firm conviction and, from the very beginning through to their very painful end, they ALL get crucified in the process.

The end result? Their collective misery is the Hanover audience’s joy as there was not more than a single minute in between laughs.

Cast and crew deal with missing props, forgotten lines, redundant scenes, lost cues, and knock down, drag out fights between one another in trying to maintain a coherent, cohesive drama.

The cast of the play within a play includes:

Robert Grove (Michael Thatcher) plays suspect Thomas Colleymoore. He has many delightfully acrobatic scenes, some with Lancely and some with the hysterical Dennis Tyde (Todd Buonopane) who plays “butler-with-a-secret” Perkins.

Sandra Wilkinson (Jacqueline Jarrold) is sexy femme fatale Florence Colleymoore who is onstage far too briefly before getting sidelined in an accident. She then returns…in far too little briefs because someone else is wearing her clothes.

Max Bennett (Adam Petherbridge) plays both Cecil Haversham and Arthur the Gardener with a devilish grin and mischief in his heart.

Rounding out the cast are Trevor Watson (Jason Bowen) who serves as lighting and sound technician (and who really wishes he were elsewhere. ANYwhere elsewhere); and Annie Twilloil (Bianca Horn) is the play’s stage manager who is thrust into the limelight and adjusts to being on stage spectacularly.

Much credit has to be given to the tour's creative team which included a fabulous set design by Nigel Hook. Lighting Design by Ric Mountjoy, Costumes by Roberto Surace amd Sound Design by Andrew Johnson. The show would not be as good as it is at being bad without their contribution.

The play won a 2017 Tony Award for Best Scenic Design in a Play and the tour show is no less astounding. The set is like its own character and the number of faux “flaws” that occur are executed realistically and flawlessly.

Get to the show early and before house lights fall, uh, dim, it is recommended to take a moment to READ the faux cast bios.

it is vitally important to read these bios because little else is offered by way of backstories for the actors on stage. Once the show begins, the relentless comedy of errors ensues and, like a runaway freight train, never yields until the ultimate crash.