(COVER PHOTO: Wendy Lippe and Zachary D. McConnell in a scene from “The Lion in Winter,” a collaboration between Psych Drama Company hosted by the Theatre Company of Saugus, now playing in Saugus, MA. through June 19, 2022. Photo by William Stofega.)

"When the fall is all there is, it matters. " James Goldman

Hosted by Theatre Company of Saugus

"THE LION IN WINTER"

Performances to be held at 44 Taylor Street in Saugus , MA.

While some may feel imprisoned by ongoing inflation, supply shortages and skyrocketing gas prices, Psych Drama Company offers a brief respite from today's grief with an intensely entertaining production of James Goldman's "The Lion in Winter."

While the play wants to fool us into thinking it has a Shakespearean texture, Goldman's dialogue shares a cutting dry wit closer to Noel Coward than the Bard.

While clearly a drama, there are many humorous moments in this production that also is staged to be "immersive" (whereby the actors seem to repeatedly "break the fourth wall" speaking their lines directly to the audience as if we are on the stage in the scene with them).

A simply marvelous approach as co-directed by Wendy Lippe and Larry Segel that yields impressive results and a far more atmospheric intimacy with the content of Goldman's material.

As the play opens, it is Christmas, 1183. We are seated around and inside the esteemed castle of blustery King Henry II of England (Brian Dion).

It is clear their relationship is adversarial from the outset, yet there is an inconsistent, underlying but occasionally endearing quality to both thanks to the balanced performances by Dion and Lippe.

This is a couple that not only loves to hate one another, they literally seem to hate still loving one another, even though Henry seeks a new bride in the extremely young Alais (Caitlin Cremins)...whose expression in the provided photo below seemingly speaks for many of us at the prospect of such a marriage. 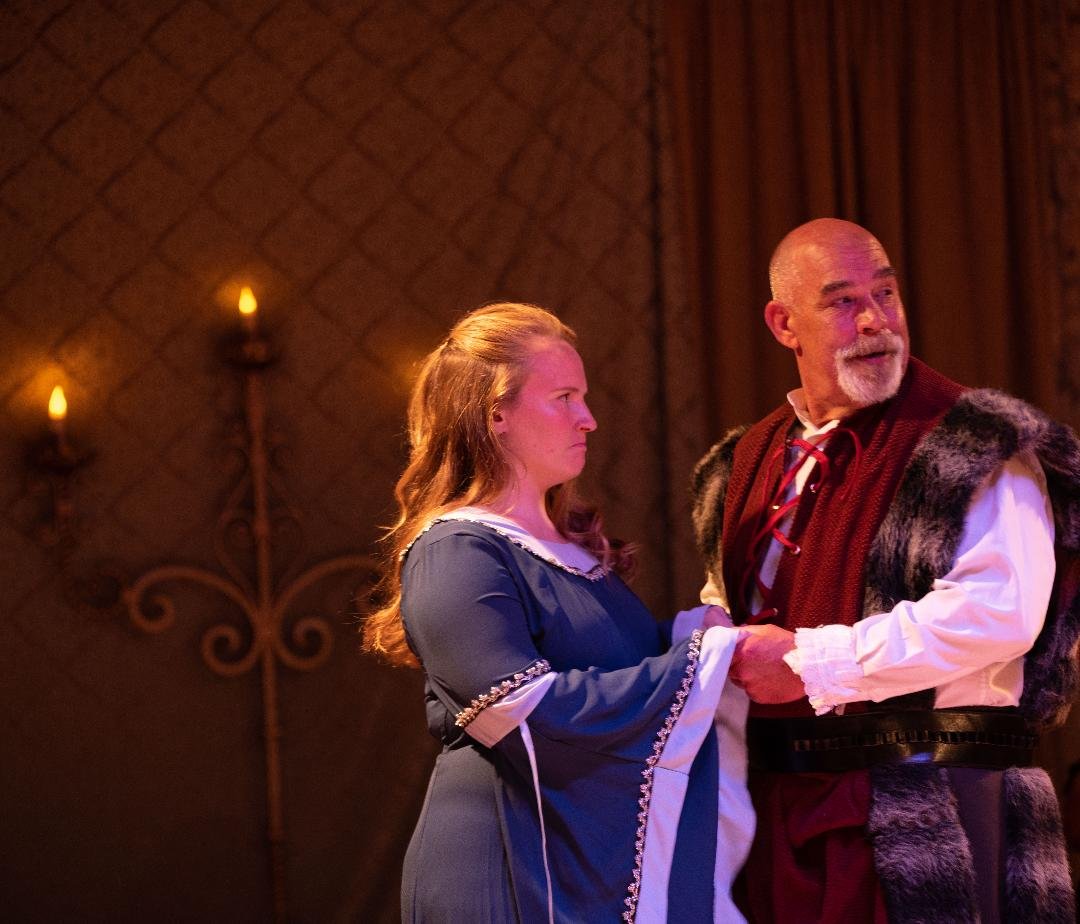 (PHOTO: Caitlin Cremins and Brian Dion in a scene from “The Lion in Winter,” presented by Psych Drama Company and hosted by the Theatre Company of Saugus, now playing in Saugus, MA. through June 19, 2022. Photo by William Stofega.)

Alais is a French Princess who is Philip's half-sister but has been living at Henry’s castle since she was betrothed to Richard at age eight.

Such is the delicate tightrope walk teetering high above the precipices of the two traditional drama masks ("Comedy" vs. "Tragedy") as capably represented throughout Goldman's play.

Prodded by Eleanor’s manipulative intervening, a contest ensues between all members of the squabbling royal family and guest of the kingdom, Phillip II, the King of France (Norman Dubois). 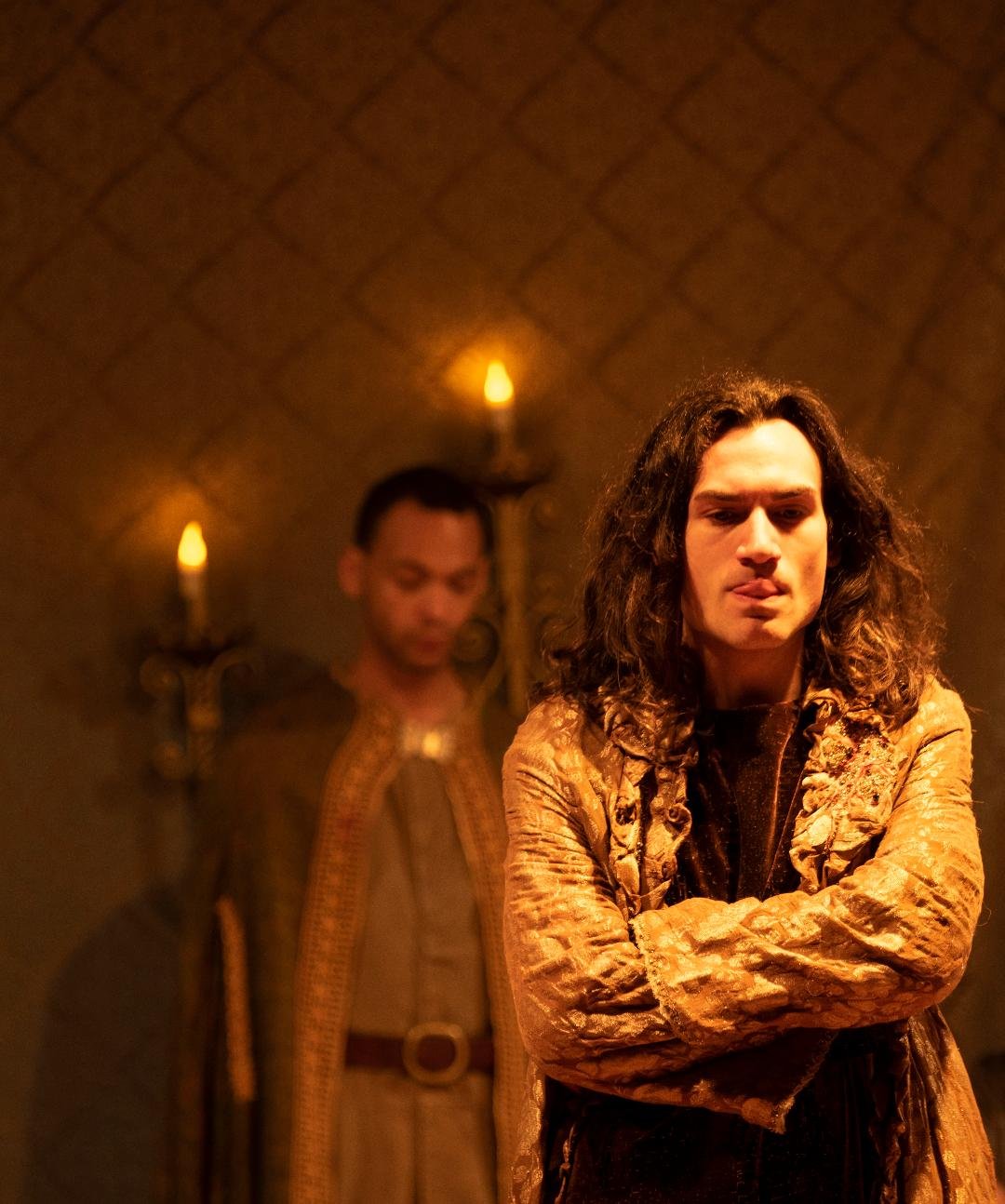 (PHOTO: Zachary D. McConnell as "Geoffrey" and Michael Mazzone as "John" from “The Lion in Winter,” presented by Psych Drama Company hosted by the Theatre Company of Saugus, now playing in Saugus, MA. through June 19, 2022. Photo by William Stofega.)

The performances of the actors portraying the sibling brothers and the visiting King are all well defined and executed.

However, it is clearly the on-stage relationship between Henry and Eleanor that is at the heart of the story and it is both Dion and Lippe that deliver the most layered and insightful performances. Dion is especially domineering on stage as the regal Henry.

Throughout Goldman's dialogue, the brothers incessant feuding is fueled by Henry and Eleanor’s mischievous competition. This leaves the audience with not one sympathetic character nor any character to root for, with the possible exception of the naïve Alais.

Cremins is good in the role of Alais but seemingly lacks that element of naïveté, almost coming across more mischievous than naïve. This may also be a result of her character, again as scripted by Goldman, being limited primarily to react to the behavior of the others in scenes.

The sheltered Alais, ultimately, is used as nothing more than a pawn by the others, leaving very little for the actress to work with as far as material is concerned.

However, Alais does figure, quite prominently, as an obvious potential threat to the relationship between Henry and Eleanor. 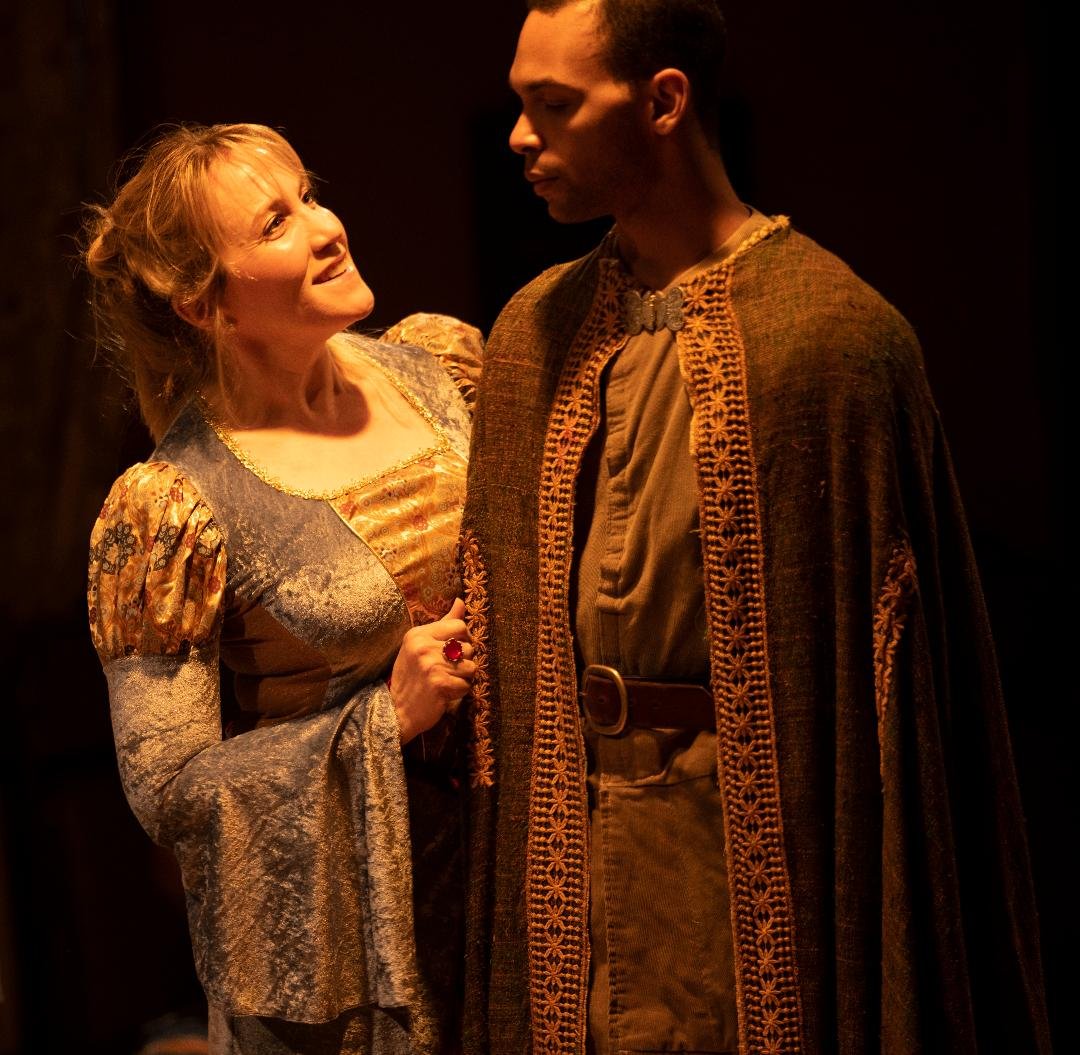 (PHOTO: Wendy Lippe and Zachary D. McConnell from “The Lion in Winter,” by Psych Drama Company and hosted by the Theatre Company of Saugus, now playing in Saugus, MA. through June 19, 2022. Photo by William Stofega.)

Not so obvious is the ultimate relationship between Henry and Eleanor, which appears acrimonious at best, pathetic at worst, yet riveting throughout the two and half hour production.

It is this relationship that keeps one delightfully guessing until the very end if their dangerous liaison and cruel intention toward one another will ultimately fall into either the depths of comedy or tragedy.

Costumes by Amanda Allen, Lippe and Vanessa Phelon were all resplendent and well-conducive to the time period.

Approximately 2 hours, 30 minutes with one intermission. 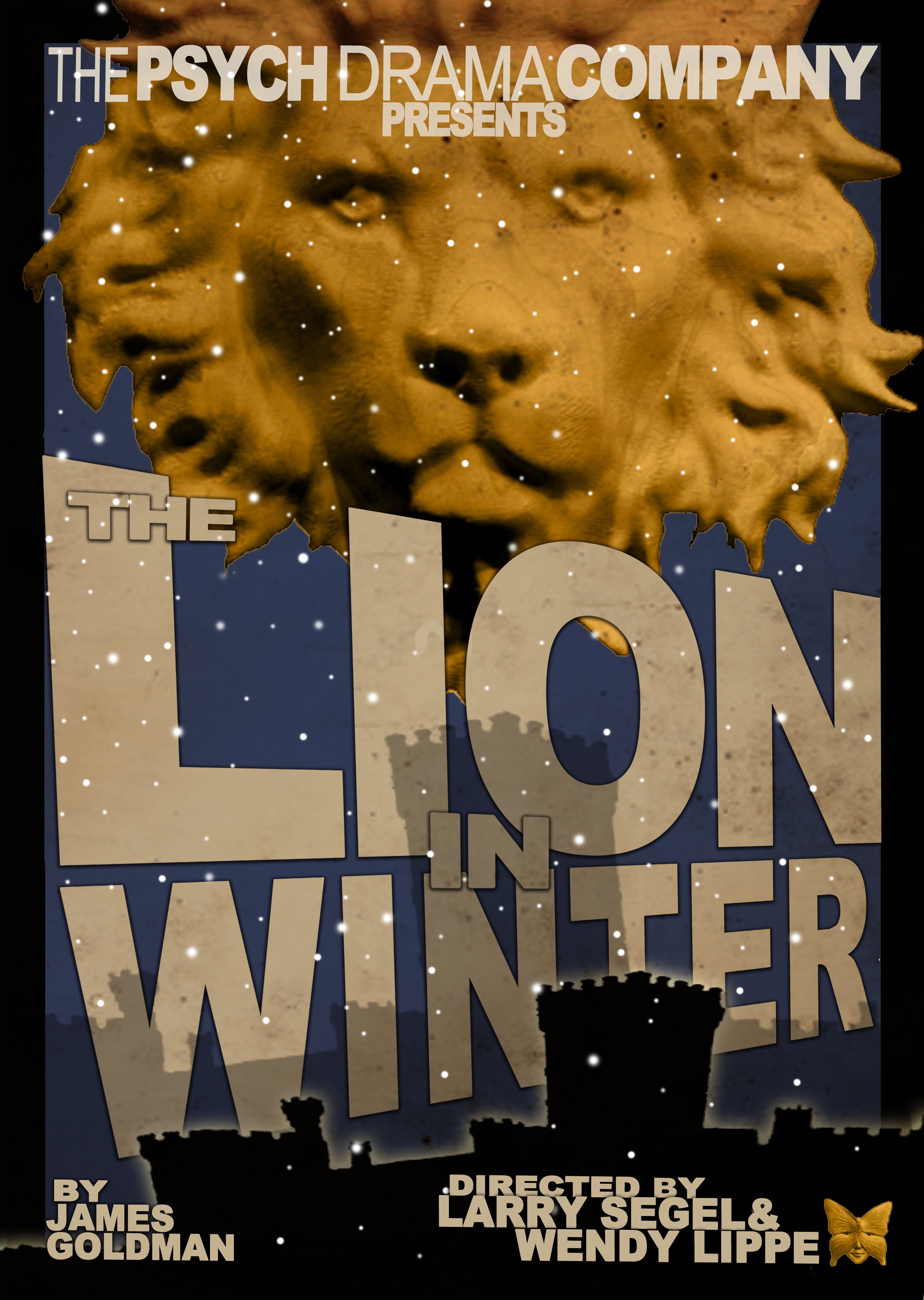 The Lion in Winter is the classic historical play by James Goldman, about King Henry II of England and his meeting with his queen, mistress, children, and rival king at his castle in Chinon, France during Christmas in the year 1183.

Who shall succeed him as king?

All three sons want to be the one, but how can Henry choose only one without making the others his enemies?

The Theatre Company of Saugus is excited to be hosting a professional Boston-area theatre company for the first time.

The Psych Drama Company has been producing innovative theater for over ten years in Boston, New York City, and Rhode Island.

Most recently, Psych Drama collaborated on an international audio drama adaptation of Macbeth with The Audiovisual Centre Dubrovnik in Croatia.

While rehearsing the Lion in Winter when theaters were closed, an audio radio-play version was recorded, and that was streamed in December 2020.

Visit the Theatre Company of Saugus page for more details

If available, seats can be purchased at the door for the same price, using cash, check, Venmo, or PayPal, but no credit cards.

Ticket prices are the same for all patrons.

ABOUT THE PSYCH DRAMA COMPANY

The Psych Drama Company’s mission is to examine theatrical works through a psychological lens. We produce emotionally powerful, immersive, thought-provoking theater. With our world being as fast-paced and technology-driven as it is, the company seeks to hold space for the public to meaningfully reflect on their lives and relationships in new ways. Psych Drama’s unique integration of theater and psychology facilitates the creation of that space. “In particular, our approach to immersive theater activates strong feelings and physical reactions in audience members because they are no longer merely spectators. And the psychologists who lead post-show discussions are trained to hold space in ways that facilitate reflection and processing of those reactions; the result can be transformative. Immersive theater and psychology – a marriage that has the power to activate, hold, metabolize and transform." – Wendy Lippe , Ph.D., Producing Artistic Director