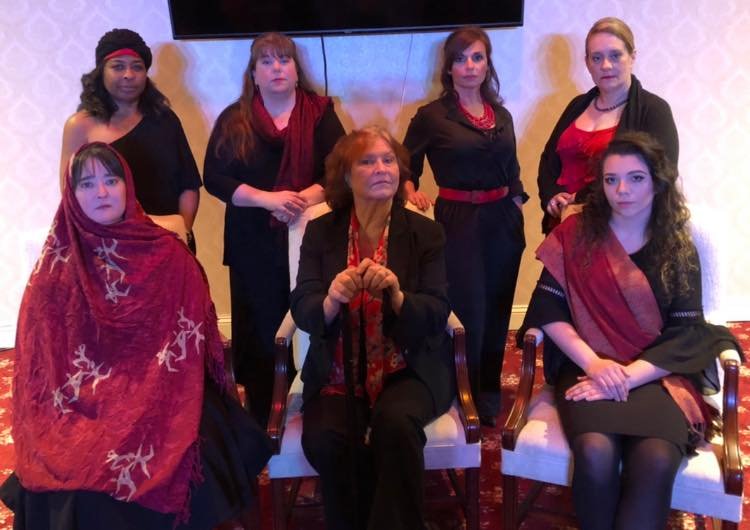 (Cover Photo courtesy of City on a Hill Arts)

In an era where raising awareness of women’s rights is critical, City on a Hill Arts presents an emotionally charged collection of true stories by a strong cast of actresses in the compelling drama, "Seven” taking place this weekend in Ashburnham.

In a small crowded room at 17 Main Street there is a small table surrounded by several chairs. On the table are a number of small props such a phone, a microphone and other items.

Along the back wall is a small flat with artwork depicting several trees. The trees are hourglass in shape with branches intertwining, extending upward toward the sky, while the roots of the trees equally extend and intertwine underground.  Kudos to David Allen Prescott for the set design filled with such symbolism and foreshadowing of what was about to unfold.

In the chairs or standing near them are seven women. Seven actresses, dressed only in simple black and red costumes, portraying seven amazing persons. Their stories true - nothing fabricated nor diluted for the sake of entertainment.

The show “Seven” is based on personal interviews with seven women who comprise the leadership of the “Vital Voices Global Partnership Network.”

The women each have overcome extreme personal and political struggles, obstructions, oppression to become the instigators of change for human rights in their respective countries.

June Turner portrays Hafsat Abiola of Nigeria who, instead of retreating from personal danger after her activist parents are murdered, instead becomes a powerful advocate for human rights and democracy.

Turner gives a subtle, subdued portrayal and seems quite at ease in the role.

Farida Azizi (Brenda Lillie) of Afghanistan who, like many women under Taliban rule in her native country, is a victim of oppression. Even with death threats, she describes her work in her homeland on women's rights and peace-building.  Lille gives a sold steady portrayal of the activist.

Bethany Johnson plays Annabella De Leon of Guatemala, who not only spent much of her youth educating herself, she was instrumental in raising her family out poverty and then she entered politics.

Johnson gives an almost animated portrayal of the congresswoman, unrelenting in the face of death threats while in office. As De Leon, she discusses her ongoing struggles against political corruption and how she advocates for rights of women. Johnson brings a lot of humor to the characterization of De Leon.

Jen Knight brings us into the world of Marina Pisklakova-Parker of Russia, who founded an emergency call in hotline for victims of domestic violence.

Hundreds of thousands of Russian women have benefitted from this service but, as Knight illustrates in some uniquely unexpected and powerful moments, the level of animosity from her adversarial opponents became almost too much for Pisklakova-Parker to endure…yet, still, she persisted.

Cherry Lynn Zinger is Mukhtar Mai of Pakistan, who tells us of how she was gang raped by four men, with her father and uncle standing outside unable to assist, then forced to live in shame, all part of “retribution” for an alleged rape committed by her brother.

Mai’s story, as portrayed admirably by Zinger, is arguably the most inspiring. As she overcame a torturous time after the rape to bring her rapists to justice, Mai subsequently helped to build schools to help better educate women in her country.

Deliciana Montoya is Mu Sochua of Cambodia, who is former Minister of Women's Affairs in Cambodia. Nominated for a Nobel Peace Prize, Sochua became prominent for her work opposing sex trafficking of women in Cambodia and Thailand. Montoya is quite stoic in how she presents Sochua’s authoritative resilience and exudes great confidence in her thorough interpretation of the character.

Valerie Schillawski is charming as she introduces us to Inez McCormack of Northern Ireland, an activist who not only fought for peace, women's equality and human rights, but also worked for global social justice and peace accords. Schillawski was quite engaging and quite amusing as McCormack throughout the show.

The stories are from women who courageously and deliberately battled - in their homes, towns, cities, countries - for the well-being of OTHER women, protecting them from domestic violence, rescuing them from sex trafficking, advocating for the poor, empowering and establishing women’s education and rights, and more.

In addition, the collective of actresses are equally as deliberate in their resolve to celebrate the power of these seven women. They not only play the women but also serve as one other’s “Greek Chorus,” filling in as other characters as they recount their lives.

Director Debbie Moylan did a nice job coordinating the intertwining soliloquies with solid blocking and nicely placed effects given the limited ability for lighting and sound. But ultimately it is the message of solidarity that is in capable hands of the impressive ensemble.

The show is FREE and runs approximately 90 minutes with no intermission.

Reservations are recommended as parking and seating is limited.