The Paramount Center Box Office is open for walk-up service Thursday through Saturday from Noon to 6:00pm.

The literary works of Samuel Beckett can cause readers of his cerebral catalog great headaches.

The plays of Samuel Beckett can, similarly, cause performers of his complex work...also, great headaches.

As an actor's exercise, just try to memorize any classic Beckett monologue. "Beckett speak" can be utterly infuriating and absorbing, simultaneously.

Like many theatre students first introduced to the works of Samuel Beckett, I began by reading his classic "Waiting for Godot" (back when it was still usually pronounced "Guh·dow" and not "God. Ow.")

For this student, the work was so cerebral it read like literal diarrhea. I was not alone in this honors class of three students and one distinguished professor.

Even the professor was not 100% clear on the overall intent of Beckett's highly complex material.

So, to assist, he brought in a fabulous audio-only recording of a production featuring actors Bert Lahr, E. G. Marshall, Kurt Kasznar and Alvin Epstein.

That recording opened up a whole new world to this student.

As I listened to the words, I could visualize the actors' movements and soon realized that this play...while it still gave me a headache...now it was for a totally different reason.

I no longer read Beckett's words as a verbal onslaught but as a masterful way of making one think of the verbal as visual, visceral and intentionally confounding at times.

Beckett took language and made it something you could see and think about...even if you did not always understand. It broadened the scope of interpretation.

Beckett's work, to me, became more like listening to a Beatles' tune with lyrics intended to stupefy rather than tell a linear tale with a predictable beginning, middle and end.

I may not totally comprehend "I Am the Walrus" but there is no doubt it is a masterpiece that evokes wondrous imagery - much like the words of Samuel Beckett.

Bill Irwin, too, is a master of the visual.

As an actor and pre-eminent theatre clown, Irwin is a virtuoso of physical theatricality.

He also comes across on stage as personable and downright charming.

One may not come away loving Beckett's work any more than they did walking into "ON BECKETT," but it should bring a better understanding of it thanks to Irwin's marvelous insight into his approach to the work and of his own examination of the writer. 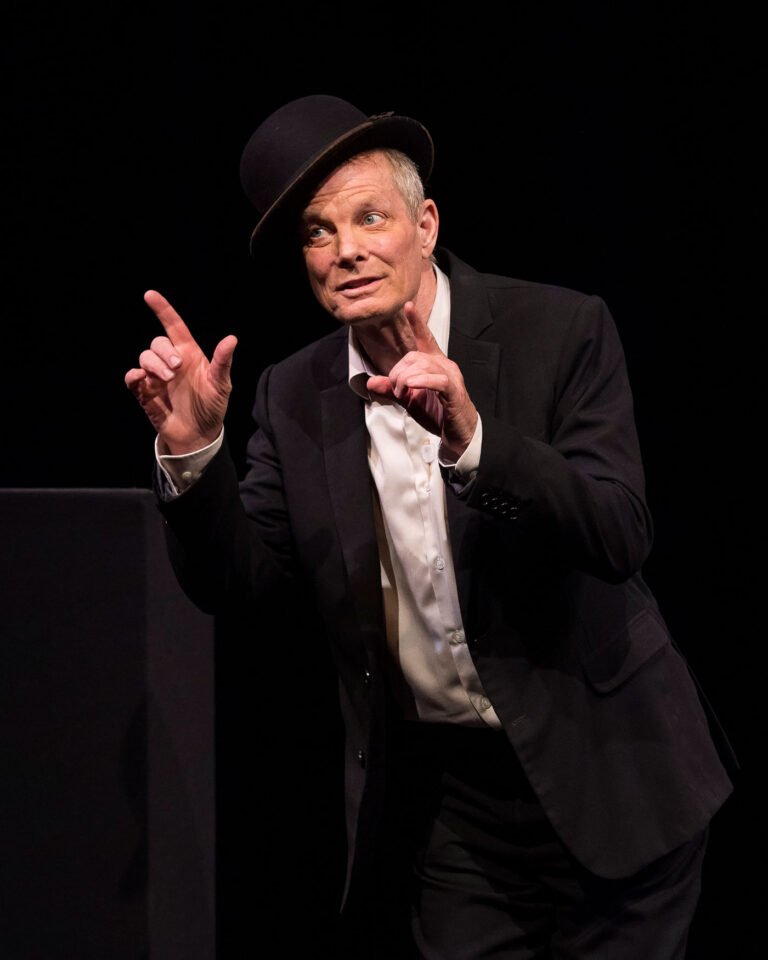 During the 80+ minute one-man show, Irwin makes it clear he does not purport to be a "scholar" of Beckett but merely seeks to address his experience as a performer in his own "actor's relationship" with the Beckett material.

Irwin performs several works out of the Beckett catalog ("Texts for Nothing," "The Unnamable," "Watt" and "Waiting for Godot") and dissects each from an actor's perspective, not attempting scholarly or literary assessment, which makes the results more relatable, even to those less familiar with the work.

The end result is a captivating experience by a master for a master.

Only in Boston for a short run, "ON BECKETT" is a wonderful bridge to understanding the actor's embrace of the complex work and legacy of Beckett. 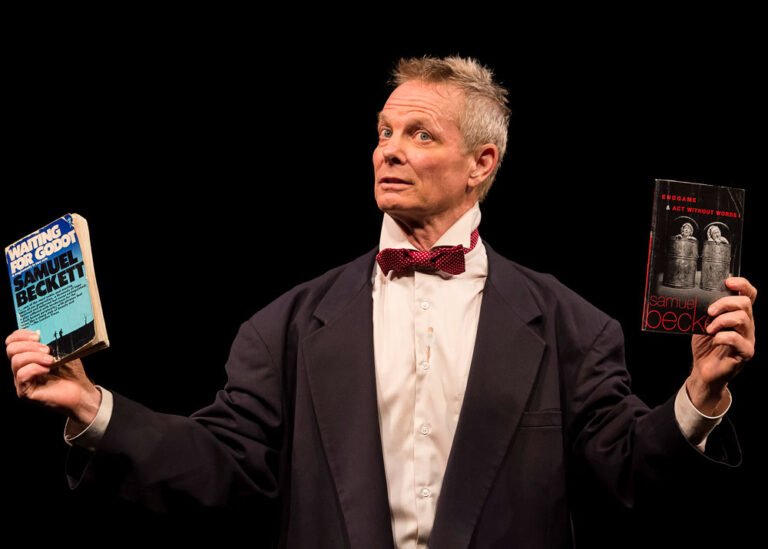 In "ON BECKETT," Irwin explores a performer’s relationship to the works of legendary playwright Samuel Beckett—widely regarded as one of the greatest dramatists of the 20th century— incorporating passages from various works by the Irish writer, including Texts for Nothing, The Unnamable, Watt and Waiting for Godot.

"ON BECKETT" is produced by Octopus Theatricals and premiered at Irish Repertory Theatre in New York City on October 3, 2018.

Irwin’s physical approach to the comic and tragic sides of Beckett’s writing invites audiences to experience the writer’s language as they never have before in this fun, surprising trek through the works of Beckett.

In July, the Theatre Hall of Fame announced that Bill Irwin would be among its 2022 class of inductees; the 51st induction ceremony, produced by Terry Hodge Taylor, has been scheduled for November 14, 2022 at the Gershwin Theatre.

ArtsEmerson is also thrilled to announce that Bill Irwin is the 2022/2023 Fresh Sound Artist in Residence.

Funded by Emerson College’s World On Stage Fund - an endowment initiated and funded in part by the Trustees of the Fresh Sound Foundation in honor of Emerson Alumna Helen Rodger Cutherbert, class of 1911 - the Fresh Sound Artist residency is managed by ArtsEmerson in support of its ongoing commitment to give Emerson students access to the iconoclast contemporary theatre artists. 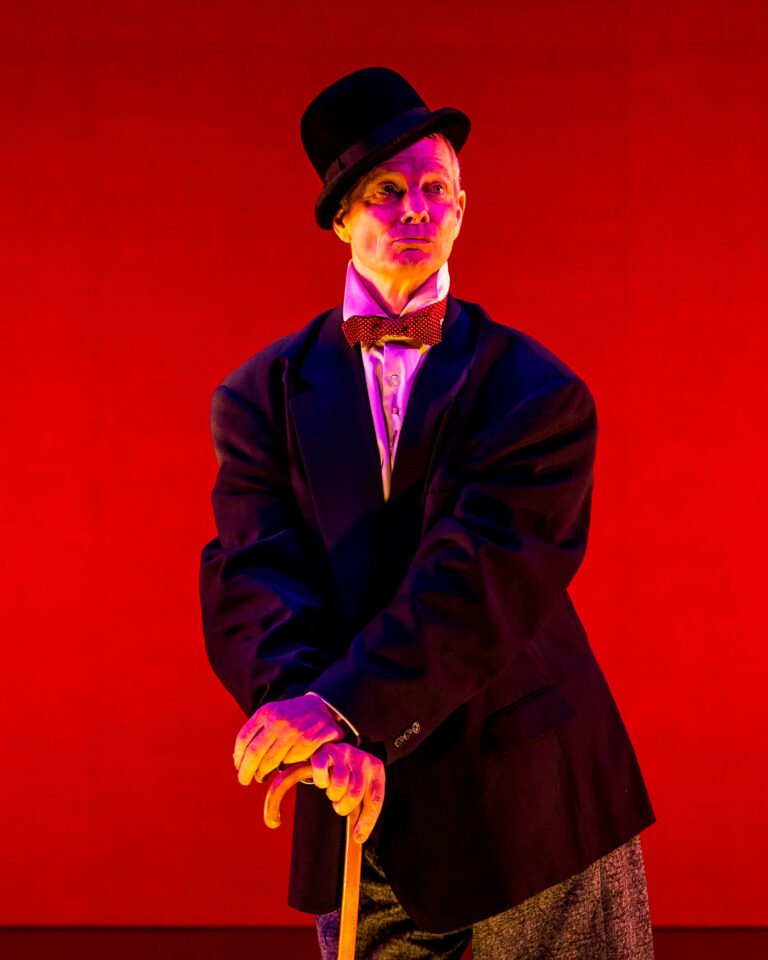 Bill Irwin’s original stage works include The Regard of Flight, The Happiness Lecture, and Old Hats.

He won Broadway’s Best Actor Tony Award for Who’s Afraid of Virginia Woolf, and picked up a second statue for Fool Moon (created with David Shiner) which earned four Tony nominations. His many television credits include Elmo’s World (as Mr. Noodle) and Legion (Mr. Loudermilk), and his film credits range from Rachel Getting Married to The Grinch Who Stole Christmas.

Irwin was an original member of Kraken, a theatre company directed by Herbert Blau, and was also an original member of the Pickle Family Circus of San Francisco with Larry Pisoni and Geoff Hoyle. Irwin is the grateful recipient of MacArthur, Guggenheim, Fulbright, and National Endowment for the Arts Fellowships.

“'ON BECKETT' is an invite — it’s a personal invitation — to deep dive into the writing of a man whose work I love AND hate — Mr. Samuel Beckett,” explains Bill Irwin. “I think 'ON BECKETT' is a good first entry to the wild and beautiful content that is Mr. Beckett’s writing — and it speaks also to those of us who read and re-visit the language often. It’s an actor’s — and it’s a clown’s — look at a great writer’s language. I look forward to bringing my take on Mr. Beckett's writing to Boston.”

“ArtsEmerson has a deep history with the work of Samuel Beckett,” says ArtsEmerson Executive Director David C. Howse. “We've presented a classic production of his signature play, Waiting for Godot, but we've also showcased radical interpretations as well, such as Here All Night, which turned the playwright's words into music, or pairing three short works together in one intense, riveting piece performed by Lisa Dwan."

"Bill Irwin's 'ON BECKETT' does something entirely new, providing a window into an actor's close relationship with Beckett's words'," continues Howse. "What struck me most about the piece was how Irwin's journey is delightful and engaging at every turn, and how well it works for both the most dedicated Beckett expert and newcomers. This show will surprise you in the best possible way and I look forward to bringing it to Boston.”

Thanks to generous support from Rockland Trust, a limited number of $10 Mobile Rush tickets will be available at 10:00am each performance day on a first-come, first-served basis, exclusively through the TodayTix mobile app. For more information, please click on “General Public'' when you visit ArtsEmerson’s Offers web page.

Proof of vaccination or a negative test is required for entry

Approximately 90 minutes with no intermission

ArtsEmerson is Emerson College’s professional presenting and producing organization. As part of an institution that believes in fostering creativity, passion, excellence, and inclusivity, we are using art to bring the world to Boston, and to bring Boston together.