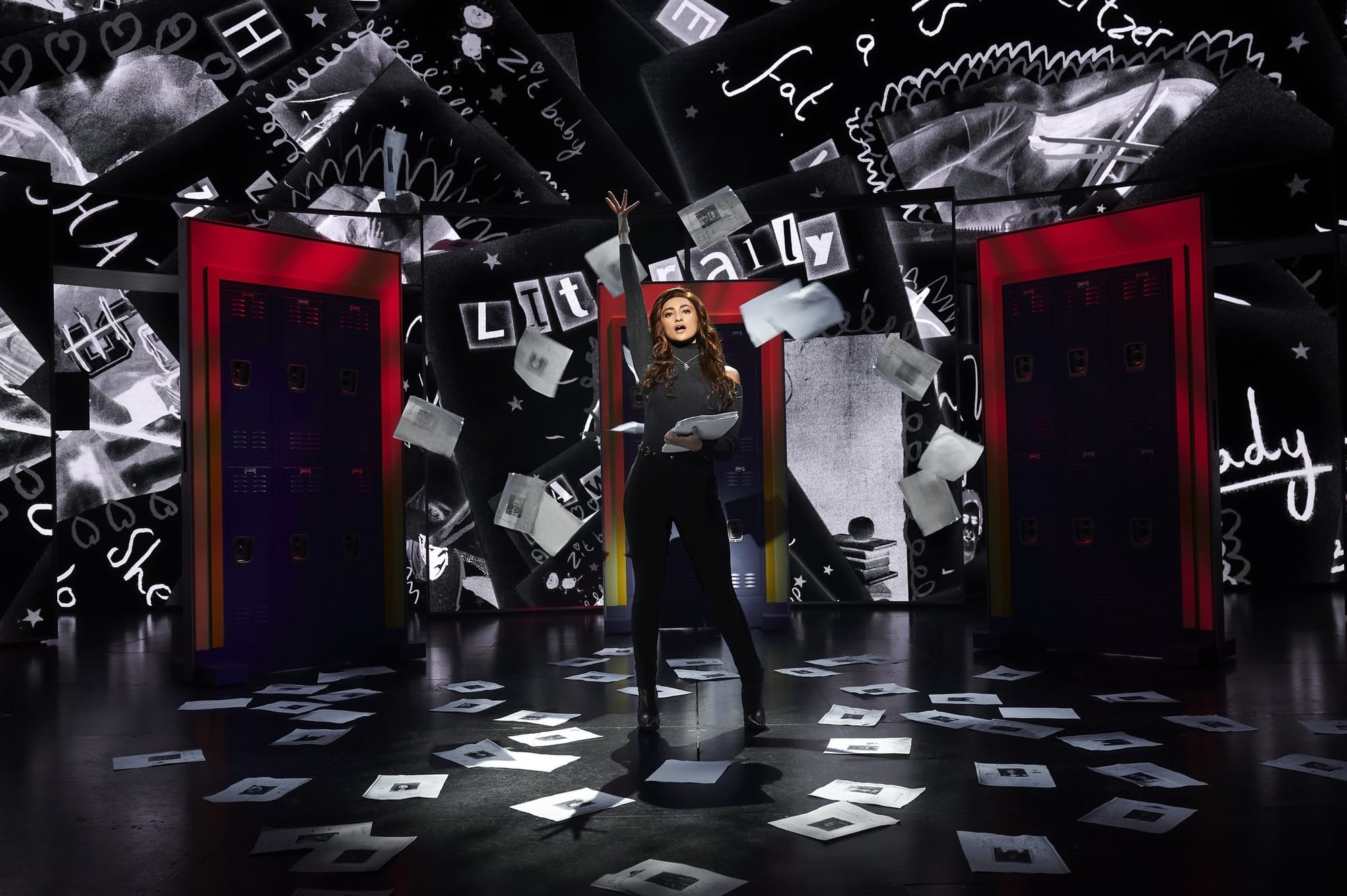 (Cover Photo: Nadina Hassan as "Regina George" in the musical "MEAN GIRLS" at the Hanover Theatre in Worcester, MA. through October 16, 2022. Photo by Jenny Anderson)

"Stop trying to make 'fetch' happen. It's not going to happen!"

“MEAN GIRLS” has arrived with a "Roar" and dressed all in PINK, bringing its "Revenge Party" to the Hanover Theatre in Worcester, MA. now through October 16.

“MEAN GIRLS” is a musical adaptation of the 2004 motion picture and comes from the award-winning creative team of director Casey Nicholaw (“Aladdin” and “The Book of Mormon”), composer Jeff Richmond (“30 Rock” and the “Unbreakable Kimmy Schmidt”), lyricist Nell Benjamin (“Legally Blonde”) and, of course, book writer Tina Fey (who also wrote the original 2004 screenplay for the film and won the 2018 Drama Desk Award for Outstanding Book of a Musical).

On Broadway, the above proved to be a perfect combination with the musical scoring an impressive 12 Tony Award nominations. This latest tour brings that same "Fearless" drive in electrifying fashion with great songs, terrific leads, a tight ensemble and stunning visual effects. 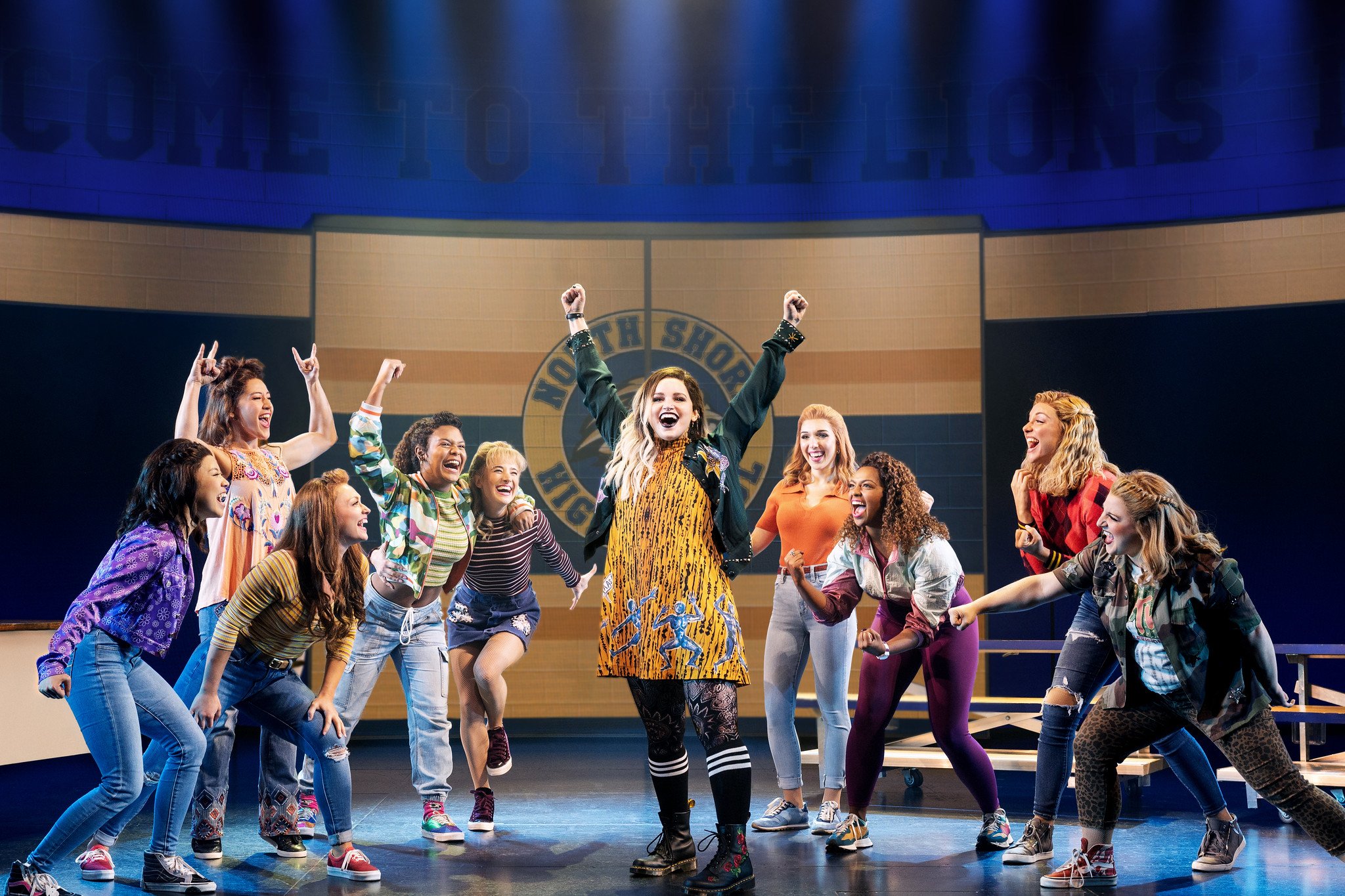 (Photo: Lindsay Heather Pearce and the CAST of "MEAN GIRLS" in the musical "MEAN GIRLS" at the Hanover Theatre in Worcester, MA. through October 16, 2022. Photo by Jenny Anderson)

As the musical begins, students Janis Sarkisian (Lindsay Heather Pearce) and Damian Hubbard (played at the 10-12 performance by Deshawn Bowens) welcome (both the audience and) new student Cady Heron (English Bernhardt) via the “MEAN GIRLS” openers “Cautionary Tale” and "Where Do You Belong?" as they point out the various "clicks" at North Shore High School in Chicago.

The clicks include the usual high school stereotypes from the nerds to the jocks to every possible recognizable faction in between - all those young people who are just trying to survive navigating their journey through the jungle that is high school.

Cady is somewhat familiar with the above concept as, up until this moment, she has spent all of her life sequestered from other teens, living with her parents in Africa and learning about the native creatures with which she has grown up.

English Bernhardt delivers a flawless performance as the conflicted Cady, who begins her journey as a fish out of water and rises to become a lioness out of Africa and a force to be reckoned with.

Yet first she must survive the native creatures in the deepest darkest jungle of all - North Shore High School. However, at least she has met Janice and Damian, counting them instantly as her new friends.

But just how trustworthy are her new companions?

Pearce is a strong stage presence - a true belter with many outstanding moments on stage, including the second act tune, "I'd Rather Be Me." Janice has ulterior motives with regards to newbie Cady which soon become clear but she also has a genuine fondness for Cady, as well.

Bowens was a riot as Damian who proves to be a truer friend to Cady than Janis and serves as the overall moral compass of the musical. Bowens also adeptly dances his way into the audience's collective heart with the numbers, "Where Do You Belong?" and "Stop."

The staging and choreographed moments in the show flow magnificently from beginning to end thanks to the incomparable work of Tony Award winner Director and Choreographer Casey Nicholaw ("Book of Mormon").

It cannot be emphasized enough that this latest tour would be nothing without the unified presence of its tight-nit ensemble who execute the staging and choreography to perfection. 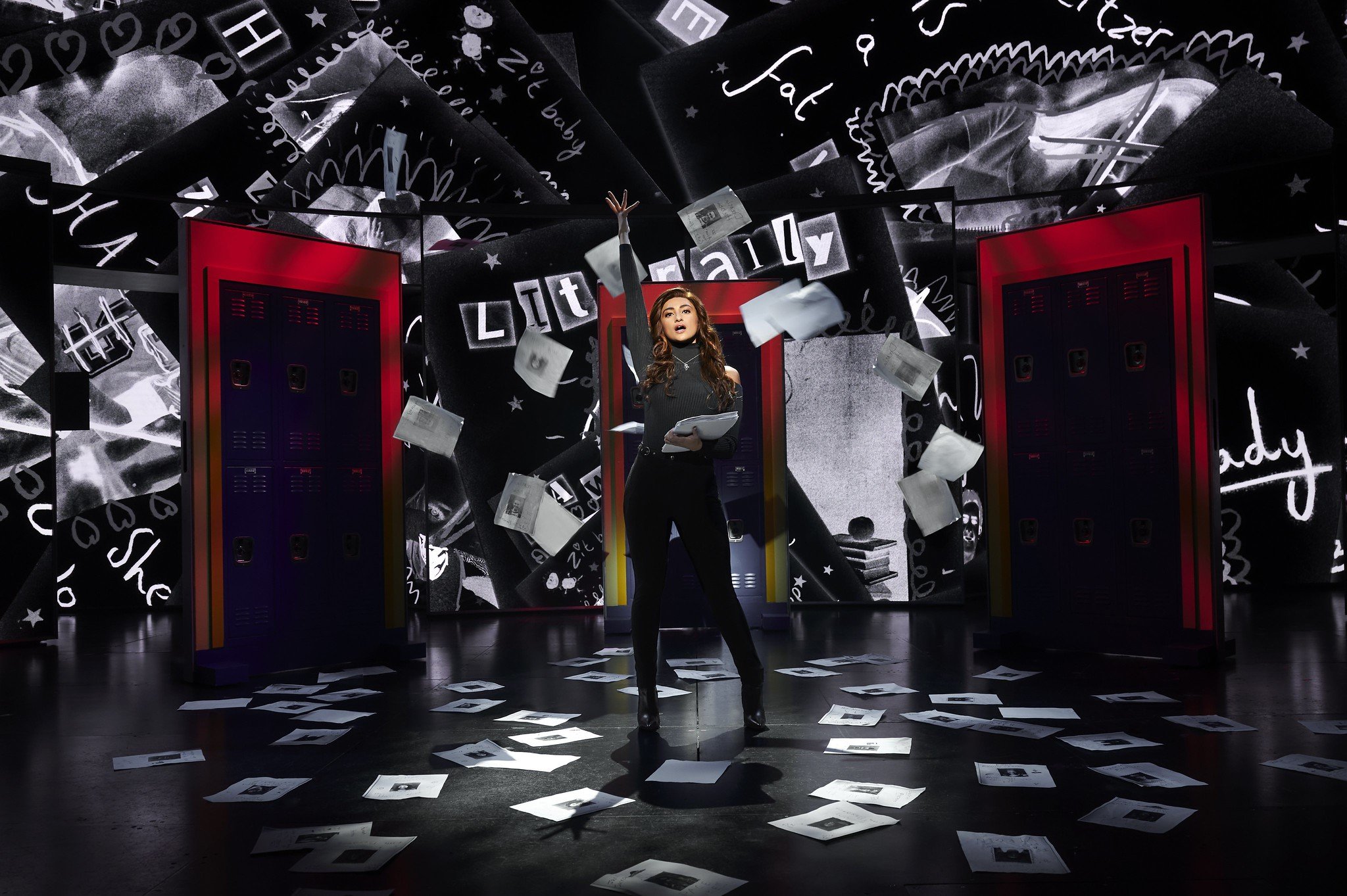 (Photo: Nadina Hassan as "Regina George" in the musical "MEAN GIRLS" at the Hanover Theatre in Worcester, MA. through October 16, 2022. Photo by Jenny Anderson)

Janis convinces naïve Cady to become a “friend” to the reigning school queens, “The Plastics,” a trio of lionized frenemies (aka the “MEAN GIRLS”) led by the beautiful but Machiavellian Regina George (Nadina Hassan) to complete Janis's own sinister plan to bring them all down.

Completing the trio of high maintenance "Plastics" are Gretchen (Jasmine Rogers) and Karen (Morgan Ashley Bryant) who each have a variant of the same disturbing level of dependency for Regina's constant approval.

The stage musical adaptation focuses much attention on "The Plastics" and, once the "unstable element" of Cady has been introduced into their collective, all three veteran "Plastics" go through an onslaught of changes - with one falling harder than others - but with all three emerging forever changed from the experience.

There are many memorable tunes thanks to the score by Jeff Richmond and Nell Benjamin - from the aforementioned opener, “Revenge Party,” "World Burn," and "Apex Predator" just to name a few.

"Fearless," arriving at the end of Act One, completes the downfall of one Apex Predator and the rise of another...Cady.

Throughout most of Act Two, there is a kind of an overall "Prom" vibe coming from "MEAN GIRLS" with some of the multiple sub plots so glossed over that a few remaining loose ends are wrapped up so quickly you might actually miss a few.

Yet none of that diminishes from the overall enjoyment of "MEAN GIRLS" that, thanks to the cast and ensemble, pouncing into the Hanover with a "Roar" and has many in the audience leaving with a contented purr saying, "I See Stars."

Approximately 2 hours and 30 minutes, including one intermission. 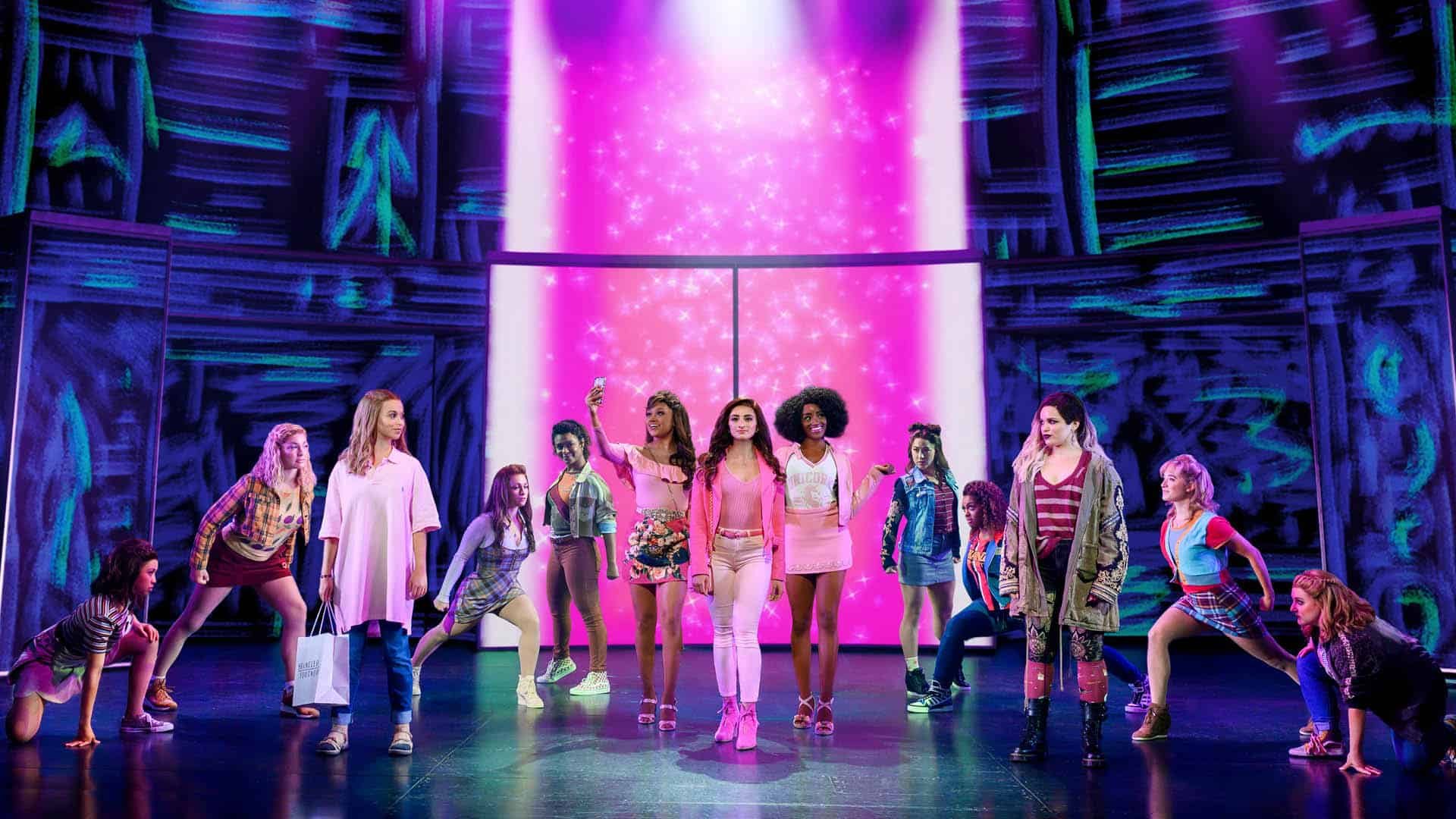 (Photo: CAST of the musical "MEAN GIRLS" playing at the Hanover Theatre in Worcester, MA. through October 16, 2022. Photo by Jenny Anderson)

IT’S NOT A REGULAR MUSICAL. IT’S A COOL MUSICAL.

Vogue cheers, “MEAN GIRLS is HILARIOUS! The cast is sensational – expert comedians with fierce voices and acting chops to match.”

Cady Heron may have grown up on an African savanna, but nothing prepared her for the wild and vicious ways of her strange new home: suburban Illinois.

How will this naïve newbie rise to the top of the popularity pecking order?

By taking on The Plastics, a trio of lionized frenemies led by the charming but ruthless Regina George.

But when Cady devises a plan to end Regina’s reign, she learns the hard way that you can’t cross a Queen Bee without getting stung.

Produced by Lorne Michaels, Stuart Thompson, Sonia Friedman, and Paramount Pictures, MEAN GIRLS gets to the hilarious heart of what it means to be a true friend, a worthy nemesis, and above all, a human being.