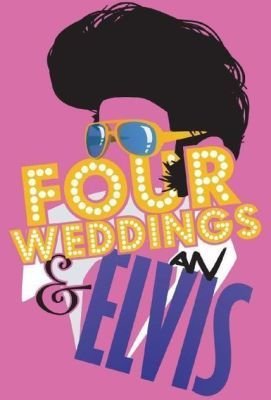 Stratton Players engaging in “Four Weddings and an Elvis”

FITCHBURG, MA. - "Four Weddings and an Elvis" by Nancy Frick. Presented by the Stratton Players. Performances at the Alumni Center for the Performing Arts, 98 Prospect Street Fitchburg, MA. Performances: Jan. 31 & Feb 1 at 7:30pm. Jan. 26 at 2:00pm. Tickets: General Admission $15, Member Admission $13 and Ages 12 and younger $7.50. Tickets may be purchased via www.strattonplayers.com. All major credit cards are accepted. Tickets may also be purchased at the door (cash only).

Sandy (Beth Wilson) is a wedding chapel owner in Las Vegas, specializing in many different packages including an “Elvis” themed wedding. Through four scenes and two-and-a-half hours she meets a variety of peculiar couples who come to get hitched.

Wilson gives a reliable performance as the oft-married Sandy, as her character provides a much needed sounding board for Sandy’s bizarre clients.

While Frick’s material is rather mundane, occasionally sophomoric and predictable, the Stratton cast elevates it to a pleasant and occasionally hysterical experience.

The first act is comprised of two of the four wedding vignettes with the first vignette entitled “The Payback,” featuring Sandy with a neighboring “Elvis” impersonator/minister, John (Thomas Sargent).

Sandy is to provide a wedding package for jilted couple Bev (Carolyn Salter) and Stan (David Valliette) and needs John’s help in performing the actual service.

Salter and Valliette are quite amusing as the jilted couple who only intend to marry as a way of exacting revenge against their former mates who previously jilted them.

The next vignette is entitled “The Comeback,” in which Sandy meets Lou (Jim Bargnesi), an “over-the-hill” former Elvis impersonator who needs the job working for Sandy.

Two ‘has-been’ television personalities, Vanessa and Bryce (Lynn Vaillancourt, Bruce Lucier) come to get married as part of a massive and poorly thought out publicity stunt to resurrect their ‘sagging’ careers.

This is where the show could have been made a lot shorter as the scene plays out far too long. However, both Vaillancourt and Lucier work well together which made the prolonged scene a bit more palatable.

Monat is spot on as Fiona who attempts to morph herself into a less abrasive, more refined woman for Marvin to marry. She easily provides not only the best performance of the night but also, aligned with Frick’s script, she has many opportune moments for big laughs and does not miss a single opportunity.

Fiona’s former lover, Fist (Joel Arnold), also imprisoned, has broken out and has come to try and stop Marvin and Fiona from marrying. Arnold’s exchanges with Monat are also expertly performed.

The final scene, “The Epilogue,” reconnects the characters from all the preceding vignettes for another wedding – Sandy’s.

The single set was expansive yet simple, utilizing the entire length of the stage. However, there was not a lot of redress required so the musical selections played during scene changes could have been shortened.

“Four Weddings…” is a bit long but definitely an enjoyable time thanks to the even-handed direction of Josh Weidenhamer and the collective performances of the cast.

The show runs two hours 30 minutes with one intermission.